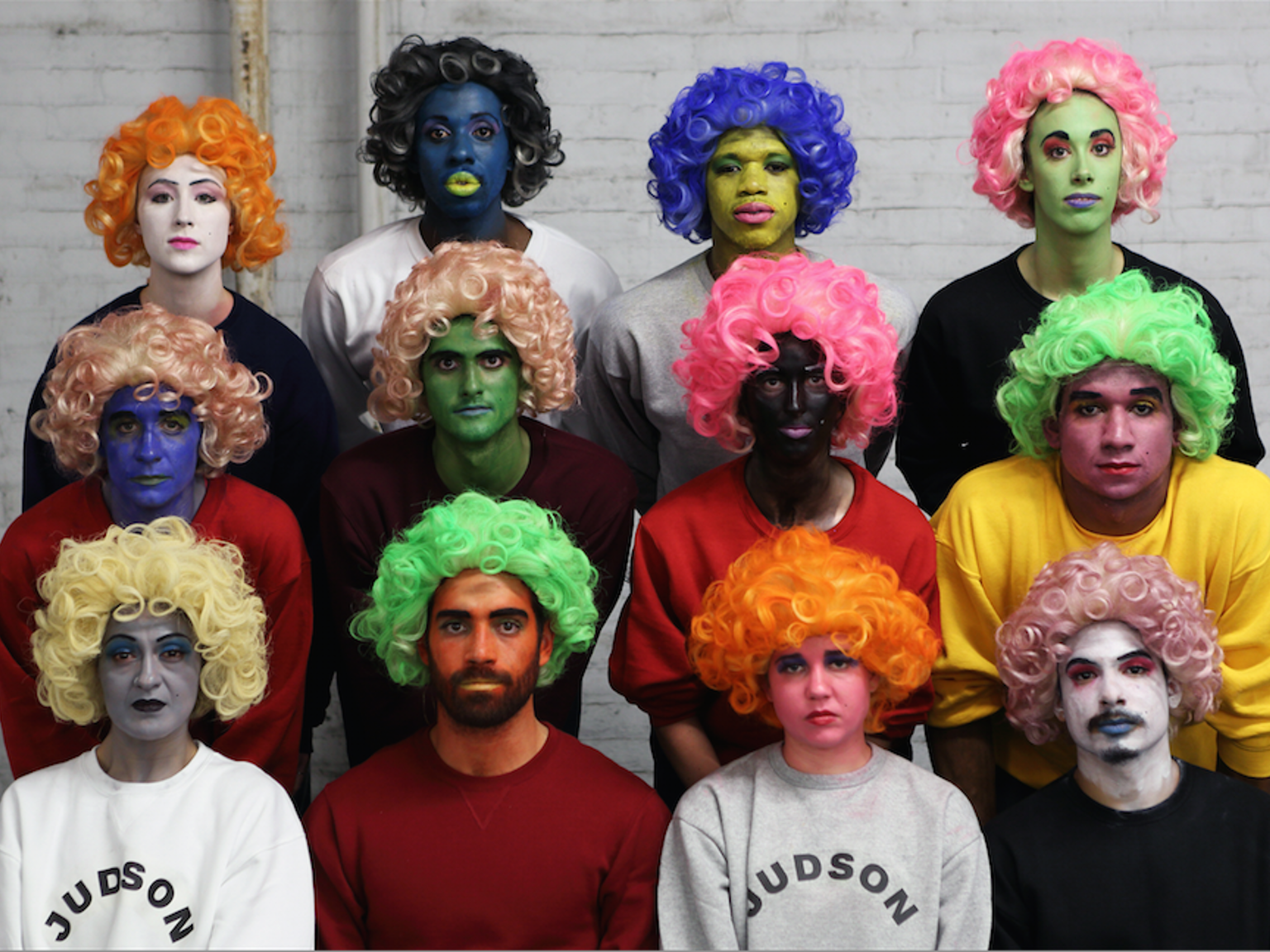 Dixon Place’s new dance commission and the feath3r theory’s production of, COLOR ME, WARHOL, will have its world premiere tomorrow, April 10th. Conceived, choreographed and directed by Raja Feather Kelly, this piece is the latest installment of an ongoing series jump-started by Mr. Kelly’s interest in Andy Warhol, pop culture, and identity.

COLOR ME, WARHOL is Raja Feather Kelly’s interpretation of Andy Warhol’s vision of the iconic musical A Chorus Line as Warhol would have imagined it. In this production, fifteen dancers bring to life Warhol’s ideas, philosophy and iconic visuals through Kelly’s unique dance-theater style intended to be radical yet accessible. The production blurs the line between truth and illusion; sourcing TV and Movies, The Andy Warhol Diaries with confessions and journal entries from the performers.

Music is by Sam Crawford; lighting and technical direction by Tuce Yasak, photography and installation by Andrew Jordan, and with co-director and videographer Laura Snow, photographer and videographer Aitor Mendilibar, with projection ensemble Lisa Lee and Jesse Ricke.

RAJA FEATHER KELLY is a dancer and choreographer, acclaimed equally for his technical virtuosity, stage presence, depth of emotional and visual sensitivity, and intellectual insight of the contemporary pop culture in which he often finds inspiration for his own work. His versatile performing skills – displayed, among others, in numerous productions by David Dorfman Dance, zoe | juniper, Reggie Wilson, in a 2010 BESSIE-winning piece The Radio Show by Kyle Abraham/ Abraham.In.Motion, and in collaborative projects with Zoe Scofield, Tzveta Kassabova, and Paul Matteson – garnered him critical acclaim in the U.S. and abroad. An English and dance major with deep interest in both verbal and nonverbal forms of expression, Raja Kelly founded his performance company the feath3r theory after writing a novel of the same name (still in development). As a teacher, he has been a Guest Artist at New York University, The University of Virginia, Memphis University, University of Florida, Dance House in Melbourne, Australia and most recently a Guest Lecturer at the University of Maryland, College Park, and a Guest Choreographer at Princeton University. Honors, residencies and grants awarded to his work include 2010 and 2009 Bates Dance Festival Merit Scholarships, 2013 Bates Dance Festival Emerging Choreographer in Residence, 2014 LMCC Workspace Recipient, Princeton University Guest Choreographer Position, 2013 and 2014 University of Florida Choreographic residencies. He has also been a co-producer of the summer dance series RoofTop Dance and is a contributing writer for The Dance Enthusiast. Off the stage, Kelly is the company manager for Reggie Wilson/ Fist and Heel Performance Group.

THE FEATH3R THEORY | TF3T is a New York-based company that filters pop-culture and current phenomena into works of radical and surreal dance theater. Its artistic philosophy is built upon the principle of understanding dance as a visual art form, in which the aesthetics and ethics of each work play equally important part. Using movement/dance, performance, theater, art and media, TF3T amplifies the “everyday” into virtuosic and surreal worlds where the unlikely comes together and the unexpected breaks away. The goal is to achieve a new synthesis – a performance-centered environment for audiences to experience and experiment in. The work of TF3T has been shown at many NYC venues known for their innovative curatorial approach, including Dance New Amsterdam, Triskelion Arts, The Invisible Dog, Dixon Place, Movement Research at the Judson Church. In 2013, his solo 25 CATS premiered at The Kennedy Center’s Millennium Stage. Most recently his short piece JAMES was a part of DANCENOW festival at Joe’s Pub at the Public Theater.

The Dixon Place Lounge is open before and after the show. Proceeds directly support Dixon Place’s artists and mission. Dixon Place is located at 161A Chrystie Street (between Rivington and Delancey), in Manhattan’s Lower East Side (By subway: F to 2nd Ave, J/Z to Bowery, 6 to Spring St, M to Essex St).

Ellie Covan, founding director, was a recipient of a Bessie, a New York Dance and Performance Award and a Bax10 Award for her service to the community; Dixon Place received two Village Voice Obie Awards, and an Edwin Booth Award for Excellence in Theater.

the feath3r theory’s Andy Warhol’s 15 (Color Me, Warhol) was commissioned by and first presented at Dixon Place in NYC with public funds, in part, from the New York State Council on the Arts with the support of Governor Andrew Cuomo, the NYC Department of Cultural Affairs in partnership with the City Council, and private funds by the Jerome Foundation, the Mertz Gilmore Foundation and The Harkness Foundation for Dance.