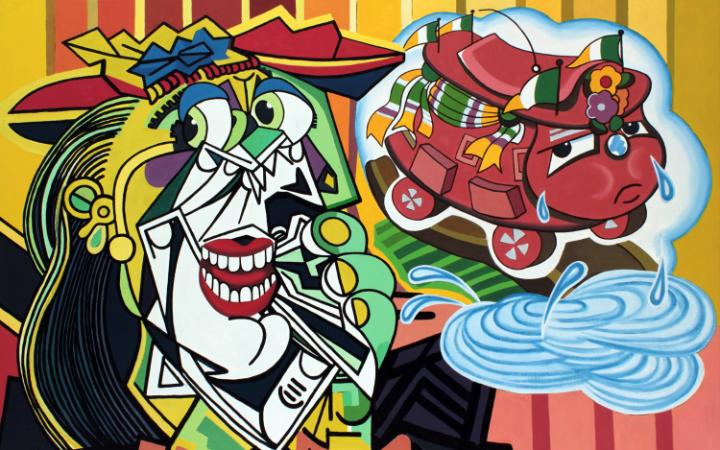 Six years ago, Tate Modern staged a major exhibition exploring the legacy of Pop Art. Called Pop Life: Art in a Material World, it took as its mantra Andy Warhol’s notorious pronouncement that “Good business is the best art”, and argued that the soul of the Sixties movement was, in essence, a cold, hard dollar sign. Many of the featured artists working in Pop’s shadow – Damien Hirst, Jeff Koons, Takashi Murakami – were shown to be interrogating moneymaking and capitalism, producing glossy art, precision-engineered for our era of high finance.

Now Tate Modern is examining Pop Art once again – yet the new exhibition is so radically opposed to its predecessor, you’d think it was considering another movement altogether. As a result, I have no doubt that The World Goes Pop will prove divisive: for some it will be a revelation, for others it will be intolerable. Either way, this courageous and enterprising exhibition gleefully rails against the oft-told orthodoxies of Pop Art like nothing I have witnessed.

To understand what I’m talking about, consider two oil paintings, in the final room, produced in 1973 by the Russian artists Vitaly Komar and Alexander Melamid. In each case, an “icon” of American Pop Art appears damaged by an unspecified apocalypse. Warhol’s tin of Campbell’s tomato soup is a sorry-looking, charred and threadbare thing. A fragment from Roy Lichtenstein’s 1964 comic-book painting As I Opened Fire fares little better. These images are as close as the exhibition comes to presenting Pop Art’s big-hitters. The Tate owns Warhol’s Marilyn Diptych and Lichtenstein’s Whaam! (1963), two out-and-out masterpieces of classic American Pop. Yet, surprisingly, there isn’t room for either in the 10 galleries, containing around 160 artworks, of the new exhibition. In a sense, then, Komar and Melamid’s paintings represent the polemical argument of the exhibition as a whole. Incendiary and confrontational, The World Goes Pop puts a torch to everything we thought we knew about Pop Art.

Yet if none of the well-known grandees of Pop Art are on show here, then who is? The answer is: a raft of artists you’ve never heard of. The point of this exhibition is to move away from the hoary story of Anglo-American Pop Art, which was invented in London during the Fifties by the Independent Group, including Richard Hamilton (another notable absentee from the Tate show), before exploding in New York in the early Sixties.

Accordingly, The World Goes Pop showcases little-known artists from all four corners of the Earth, from Brazil to Japan, who engaged with Pop’s “spirit” during the Sixties and Seventies.

Hands up if you were already well versed in the oeuvre of the Polish artist Jerzy Ryszard “Jurry” Zielinski (1943-80). I certainly wasn’t. Yet here, in the opening gallery, is his brilliant painting Without Rebellion (1970): a close-up of a sickly white face, with two Polish eagles in front of red suns in place of eyes. From its bottom edge, a scarlet pillow, representing this unfortunate ghoul’s tongue, lolls out into our space, pinned in position by an enormous metal spike.

Like another work by Zielinski on show nearby, The Smile, or Thirty Years, Ha, Ha, Ha (1974), in which three ominous blue crosses stitch shut a pair of red-and-white lips floating against navy, Without Rebellion attacks censorship in the People’s Republic of Poland with great economy and formal poise – and a brutal frisson of menace. As Lichtenstein might say: KA-POW!

Zielinski is typical of the many artists in this exhibition who worked within the Pop mode pioneered in London and New York, but adapted it to their own political ends. In fact politics – in the sense of raging protest and mass demonstration – is an essential part of the curators’ new vision of global Pop. Everywhere we turn we find hard-left dissatisfaction with the political status quo. American imperialism, the Vietnam War, nuclear bombs, the corrosive promises of capitalism: all come in for a drubbing. Jeremy Corbyn would be in seventh heaven.

When it works well, as in Zielinski’s case, this sort of militant Pop is memorable: Norfolk-born Colin Self’s Leopardskin Nuclear Bomber No 2 (1963) is also a good example. This ambiguous artefact – part toy US bomber, part pink phallus – is clad in leopard skin, and sprouts alarming nails from its snout. It’s a Surrealist Object reconceived for the post-nuclear Pop age: horrifying – and great.

Too often, though, the politicised artworks offer little more than one-liners of protest – the sort of thing that would work well as a slogan on a placard, but is less interesting in a gallery. Indeed, some of the pieces in this vein are laugh-out-loud bad: Spanish duo Equipo Realidad’s Divine Proportion (1967), a pastiche of Leonardo’s famous Vitruvian Man as a US soldier, is both so woeful, aesthetically, and blunt, in terms of meaning, that it would barely pass muster as a newspaper cartoon.

Aside from politics, the other, arguably more successful theme is sex – specifically, the way that women are presented in the media. In the past, Pop Art has occasionally been criticised for being sexist. Recently, though, a number of forgotten female Pop artists have been rediscovered. Half a century ago, they were making important work focusing on their own subjective experiences, rather than presenting women as sex objects. The Tate exhibition offers a primer on their output.

Feminist Spanish artist Eulalia Grau is represented by her nightmarish but unforgettable Ethnographies series: in Pànic, the boot of a swish pink car opens to reveal the surreally large face of a woman stuffed inside, silently screaming, like the victim of a serial killer. Vacuum Cleaner is just as disturbing: a vacant, doll-like bride lies stiff on a carpet, at risk of being dusted into oblivion by a gigantic suction nozzle above her.

Judy Chicago, meanwhile, who attended an auto-body school in Los Angeles as the only woman in a class of 250 men, spray-paints vibrant patterns evoking wombs and women’s genitals onto car bonnets with acrylic automotive lacquer – at a stroke deflating America’s macho car culture. Chicago’s work appears in a small section towards the end called “Pop Folk”. This is a deliberately provocative oxymoron, since sleek, mechanical Pop is usually seen as the antithesis of homespun, handcrafted folk art.

For some, this gallery will prove too much – extending an already elastic definition of Pop Art to snapping point. Moreover, while revisionism may be a good thing, full-on regicide – omitting founding fathers of Pop Art such as Warhol and Lichtenstein – is strange. Warhol is a god of 20th-century art because he forged the visual language so readily adopted, consciously or not, by most of the artists in this exhibition. The final room, for instance, showcases German artist Thomas Bayrle’s Laughing Cow wallpaper from 1967, which makes sport of the logo of a famous brand of processed French cheese. Yet there is no mention of the fact that it would have been inconceivable without the precedent of Warhol’s own wallpaper, featuring huge pink cow heads floating against bright yellow, exhibited a year earlier.

Too many of these artists, then, are dressed in borrowed robes. They are the Pop equivalent of the Salon Cubists, who worshipped at the altar of those pioneering explorers of form, Picasso and Braque.

Other objections could be raised too. But, I suppose, this is par for the course with a show like this, which re-imagines Pop Art from top to bottom, transforming it from a nimble, knowing art form, specialising in flip irony with an ambiguous attitude towards capitalism, to a right-on movement of one-note sincerity and radical political beliefs. Such a profound overhaul will not be everyone’s tin of Campbell’s soup.

Overall, though, this raucous exhibition not only provides an exhilarating snapshot of the global counter-culture during the Sixties and Seventies, in all its neon, vinyl, faux-leopard-skin glory. It also refuses to tell the same old story.

And such an original approach – challenging accepted taste, as Pop Art did from the start – deserves respect.