Home Sight Seeing What Do Andy Warhol And Artist, Pakpoom Siliphan Have In Common? 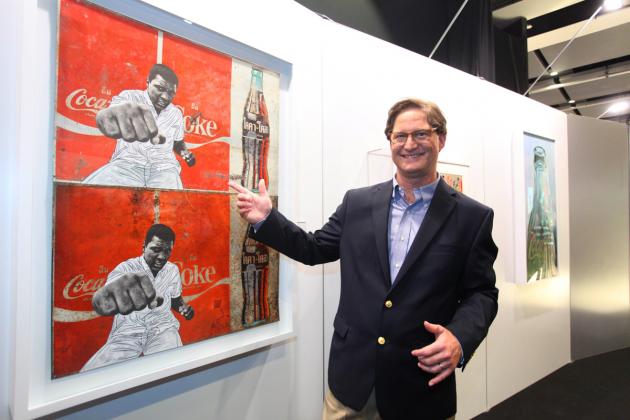 What do Andy Warhol and artist, Pakpoom Siliphan have in common? It’s a bottle of Coke – and specifically the classic shape of the Coca-Cola bottle.

Warhol was attracted to the bottle as another ubiquitous commercial icon and made it even more ubiquitous in countless multiple-image prints. Pakpoom, in his 2013 mixed-media piece “Double Ali Punch on Coke”, added another famous icon – boxing champion Muhammad Ali – in a double-portrait painted on an old metal advertising sign he’d salvaged, complete with the name “Coca-Cola” in Thai script.

Both that clever work and Warhol’s striking 1986 chequerboard print “Drinking Coca-Cola Myself in the Factory” ended up in the soda manufacturer’s permanent collection in Atlanta, Georgia, and now they’re touring the world along with other 20 other samples of genuinely “pop” art.

The Coca-Cola Bottle Art Tour exhibition, celebrating 100 years of Coke’s iconic bottle, is on view at Bangkok’s EmQuartier mall, having created a fizz across Latin America, Africa and Europe. Thailand, its final stop in Asia, has been a lucrative market for Coke for more than half a century.

Ted Ryan, the company’s director of “heritage communications”, has been scouting out historical allusions to the brand for 18 years.

“The iconic glass Coke bottle originated in 1915,” he says. “Coca-Cola wanted a bottle that would become a characteristic of the brand, and it remains inimitable even today. The bottle is unique for contours that are recognizable even when you hold it in the dark, or even when seen in broken pieces on the floor. It’s also a classic, timeless icon that’s inspired many artists in many disciplines.”

The exhibition was designed to be “fun and engaging”, Ryan says. “It tells the story of the bottle and shows its impact in popular culture.

“You can see that the exhibition engages all your senses. You can smell the Coke and feel the bottle. There’s a video of people drinking ice-cold Coke that captures the sensation. And you get to experience the many art pieces. It’s a walk-through tour, not like going to a museum, and each of the art pieces is different.”

Mounting the one-week Bangkok show cost Bt40 million, excluding insurance for the art, and you can immediately see why when you get inside amid the lights and sounds. The exhibition covers 500 square metres and delivers a heady punch to all the senses. The aroma of Coke fills the first hall, a big red box, as rows and rows of bottles from across the decades offer themselves for a caress, the shape varying subtly with the passage of time. A computer-controlled mirror set against one wall seems purpose-built for selfies.

The next area covers the history of Coca-Cola via images projected on the wall, accompanied by the hiss of bottle caps being popped off so that patrons can enjoy a cold sample.

The final hall has the “masterpieces” of this very niche sub-genre. Ryan is quite willing to credit Warhol for helping popularise the brand.

“In 1961 when Warhol did his first Coke bottle, he was just trying to express himself as an artist, to find his style. He picked the Coke bottle because it was so well known, one of the most recognizable shapes in the world.”

As well as the print showing Warhol relaxing with a sip from the bottle that in turn helped make him famous, the exhibition has a black-and-white drawing on paper entitled “Coca-Cola Signed Bookplate”, which he did in 1974.

In sharp contrast there is the conventional art of Norman Rockwell, the most beloved of American illustrators. In his 1937 oil “Three Boys Fishing”, sure enough, one of the lads is in charge of chilling the Coke supply.

Pakpoom has his “Double Ali” and three more works in the Coca-Cola Collection. Now 43, the Silapakorn University graduate moved to England in 2002 to study printmaking at Camberwell College of Art and also earned his master’s at Chelsea College of Art and Design.

His interests run to globalisation, consumerism and the universal reach of cultural icons, with ideas expressed through found objects – like the tin Coke sign from which Ali takes a punch, and vintage wooden Coca-Cola crates that bring to mind Warhol’s campy Brillo detergent boxes.

Kate Brinkworth’s 2009 oil “Black Coke” is so realistic that it seems surrealistic, and Kim Frohsin’s acrylic-and-collage “Tsunami Coke Memorial for Japan”, made in 2011, is quite moving.

Steve Kaufman’s 2008 oil “Whistler’s Mother” places a bottle of the soda in the famous mum’s lap alongside an iPod, with its cord curling to her ear, part of a commercial campaign he did for both products. And Jean Wells’ 2014 metal sculpture “Pizza and Coke” pretty much summarises supper for a lot of people.

Coca-Cola was also appearing in feature films long before manipulative “product placement” caught on, so the show has lots of photos of screen stars like Clark Gable, Robert Redford, Ann Margaret, Jack Nicholson and Frank Sinatra slugging back a Coke, not to mention the Beatles.

Suitably star-struck, patrons can have their picture taken kissing a bottle and have the image transferred onto their bottle as a keepsake, and youngsters are having a ball creating their own bottle designs on computers programmed for the purpose.