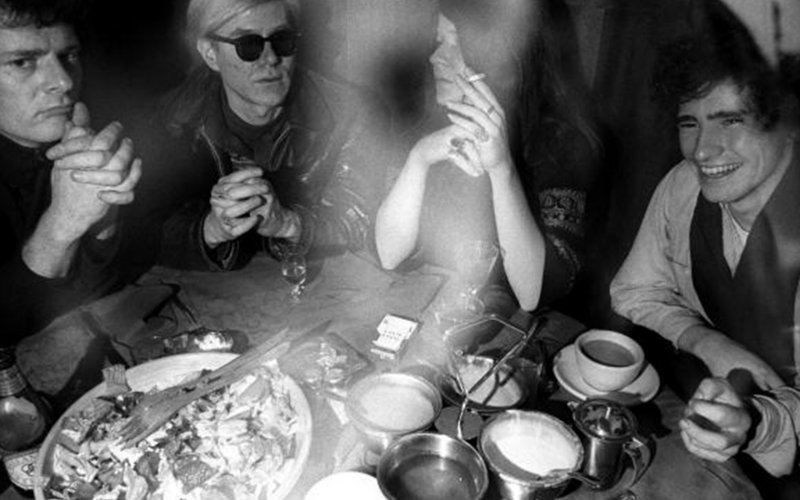 The New York art crowd flocked to the first incarnation of the legendary venue—with Roy Lichtenstein out front and Andy Warhol’s crew putting on a show in the back.
A giant disco ball, prickly with silver light, hung in the dark performance space of the Bowery Electric and in this brick-y basement it looked like Tinkerbell trapped in Shelob’s Lair.The disco ball seemed also deliberately incongruous, as much so as the Beatles T-shirt worn by a darkly bearded fellow hunched over an illuminated console.This was, after all, last week’s celebration of the 50th anniversary of Max’s Kansas City, an avatar of Punk, thus mortal enemies of Disco, and the darkly-themed crowd—not a fashionista or silver-painted naked paparazzo-magnet in sight—included such stalwarts as the performers Walter Steding, Joey Kelly, and a onetime Max’s waitress, the unalterable Debbie Harry, and also Yvonne, wife to the late founder of Max’s, Mickey Ruskin.

Yes, there are second acts in American lives, and Max’s Kansas City was a monster party not once but twice. Indeed there were three perpetual parties, but I’ll get to that.

Ruskin, a suburban lawyer, opened the joint on Park Avenue South in December 1965, specifically intending it to be an artist’s hang-out. That it swiftly became, and at a moment when the tectonic plates of the New York art world were in brilliantly intense collision, and Max’s Kansas City was the theater where this played out, where artists—elusive beasts these days—writers and other interested persons would congregate nightly, a time when the Art World was just that, a world.

Which artists? Well, Pollock was dead, Abstract Expressionism was, literally, history and Willem de Kooning was about the only Ab Ex to show his face there.

But everybody else. Frank Stella was such a regular that he got one of the booths by the bar. Carl Andre, Brice Marden, Carolee Schnemann and Larry Poons might easily be on hand, and Pop would be represented by Roy Lichtenstein and James Rosenquist.

There would be Minimalists like Larry Bell and Donald Judd, and Conceptualists, like Lawrence Weiner and Joseph Kosuth, who would never shrink from an argument.

“There was talk about reputation but not about success. All of this changed within a period of months. There was an explosion of art dealers, art galleries, pricing wars.”

Also John Chamberlain—who had a big piece of art on he premises—and guys from the new Earthworks movement, like the highly verbal Robert Smithson.

It could be a rambunctious crowd and Maurice Tuchman, the curator, who put together a show about the Max’s artists a few years back, observes that a plate-glass window got broken in a fistfight at least twice a year.

Well, that would be the front room. The back room was another world. That was the Warhol enclave. That was where you would see Warhol, Paul Morrissey, Ronnie Cutrone, Bridget Polk, such Warhol Superstars as Utraviolet and Viva, plus ambient glitterati.

There was no brawling there, and no heavy tippling, just uppers and downers to perk you up, to calm you down until the magic moment when somebody might holler “Show time!” And exhibitionism would become a competitive sport.

The separation between the front room at Max’s Kansas City embodied Warhol’s increasing alienation from the “serious” art world because the bigger he became as a bold-face name in the media the more swiftly his reputation crumbled there.

Indeed Philip Leider, the founding editor of Artforum, told the New York Timeshe had resigned from the magazine because of what he called “Warholism.” “It turned out that Warhol didn’t care about art,” Leider said. “He really was into what he called ‘glamour.’”

As Tuchman observed to me, “The closing exactly coincides with the emerging of what can best be described as the Art Market. Before there was never any talk about money. There was talk about reputation but not about success. All of this changed within a period of months. There was an explosion of art dealers, art galleries, pricing wars.”

So the non-stop party that was Max’s Kansas City was finally over? Hardly. The joint was shortly reborn as a Punk nexus. And, as you will see, Warhol figures in Part Two also.