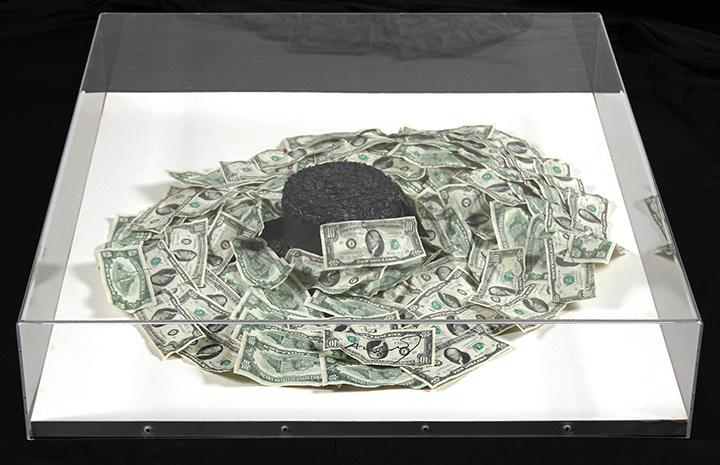 Looking for both a headpiece and a real conversation piece? At auction now is a wide-brim, black, straw Halston hat covered in $10 bills. The man who appended those dollars: none other than Andy Warhol.

Warhol’s Million Dollar Hat was created as a 3oth birthday present for his pal, Robert Giller, a doctor, in 1972, and presented it to him at a party at the townhouse of a mutual friend–the mononymous fashion designer, Halston. After artfully crinkling the bills and weaving them into the hall, Warhol completed the work by signing one of the Hamiltons in black marker. Later, Warhol put a picture of Giller wearing the hat in his 1979 Andy Warhol’s Experiences and gave the physician an autographed first edition. (The book is also included in the auction lot.) The hat has been kept secure by Giller’s widow since his 1996 car-crash death.

Giller and Warhol must’ve indeed been close pals. The pop art icon was, after all, a famous skinflint, says Lesley Frowlick, Halston’s niece: “I was surprised to see that the bills used for the sculpture were $10 bills instead of $1.” Regardless, its price tag today contains far more digits. Estimated selling price: $800,000 to $1.2 million.