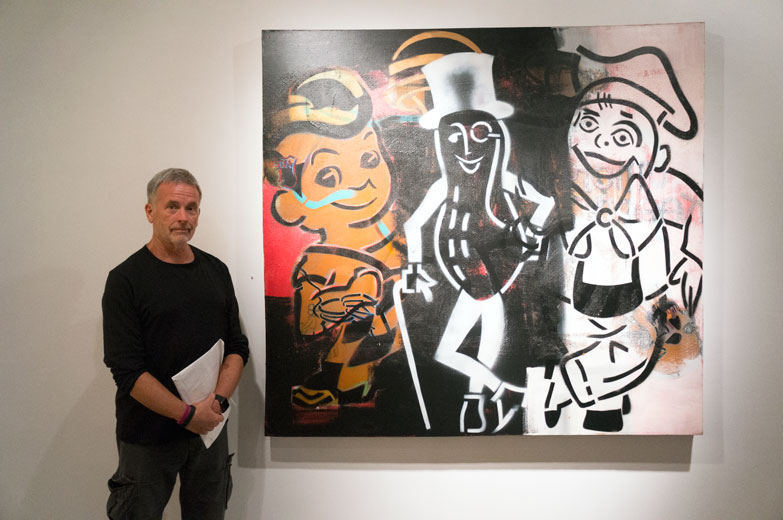 Back in 1970 Michael Netter was a recent graduate, soaking up the big city’s vibrant art scene. A striving painter, he fell in with Andy Warhol’s Factory crowd after showing up to a party with his brand new Sony Portapak video camera (20-pound backpack and all). The new technology instantly attracted the pop-master. “Before, ‘Hello, how do you do,’ it was: ‘Can you do that for me?’” Netter says of his first interaction with Warhol. For the next few years, he followed him around, filming bits and pieces of Warhol’s world, from random conversations at the Factory, to the infamous first meeting between David Bowie and Warhol (“He was miming! And miming badly!”), and interviews with the likes of Cybill Shepherd, Brigid Polk and other Warholian superstars.

It was a heady period, resulting in more than 200 films. Netter eventually moved into a more stable line of work, making a living in marketing and management consulting– but he never let go of his primary passion, painting. Still, for years almost no one got a glimpse into his studio. He cranked out paintings and then stacked them away in his upstate barn, as if operating in his own personal art vacuum. Now, Netter, a resident of the Bowery for 40 years, is finally ready to share his trove of artwork with the world. His debut gallery exhibit, Cryptographics, is currently on display at a pedigreed Chelsea gallery, ACA Galleries at 529 West 20th Street.

“I was kind of having a monologue with myself, and now it’s a dialogue,” said Netter, who seems vaguely surprised with the art world’s interest in his work. “I’m benefitting a lot from the feedback–now it’s a feedback loop.”

Though he’d single-mindedly continued painting over the years, Netter said he felt his work was for his own self-fulfillment and it never really occurred to him to try to show his paintings to the public until a call from the Warhol Museum in Pittsburgh woke him up. The videos he’d shot long ago now serve as integral and priceless documentation of one of the most fertile periods in American art history.

“I kind of forgot I had even done [those videos] and they called me last summer asking me questions– I hadn’t even been to the Warhol Museum, which had been open for 20 years,” Netter said. “So they brought me out and I was shocked that there was a whole viewing room, my name was on plaques all over the museum.”

Seeing the so-called “meaningless” videos he’d had fun playing around with back in the day appreciated in a museum made him realize his never-before-seen paintings might also find interest with the wider public. Sure enough, his curator at ACA Galleries, Mikaela Sardo Lamarche, said she was intrigued when she first laid eyes on Netter’s sequestered work.

“One of the reasons we were so attracted to the work was because, despite the fact he hadn’t shown it before, it was really the work of a very mature artist who had a real vision that was really his own,” she said. “It really spoke to an overall sensibility of art making of a very specific time and place.”

Netter’s pieces included in the show are mostly from the mid-1980s and 1990s. The paintings certainly play well with the pop culture sensibility Warhol popularized. Many employ aspects of collage, with recurring symbols and iconic images like McDonald’s golden arches, stencils, and cut-outs. Seen in person, they have an elemental and tactile quality that doesn’t come through in pictures.

But for all the stylistic nods to pop art, much of the work is of a personal and autobiographical nature, with family life figuring prominently. For example, Netter and his wife raised three daughters, and one piece shows images of maternity and babies, made around the time they were expecting their second child. Another painting repurposes drawings his kids made, overlaid with a children’s rhyme.

In a separate room, you can watch some of the Factory videos Netter shot. The room is also surrounded by paintings that are most clearly related to Warhol’s archetypal image-making– a series of 21 super iconic portraits, layering cartoon images on top of recognizable art history portraits: Van Gogh’s self portrait mingling with Popeye’s; Minnie Mouse overlaying the Mona Lisa; The Girl with the Pearl Earring hiding under Disney’s Cinderella.

“I always try to iconify things,” said Netter. “I like layers, and even in the background there’s a layer below of wallpaper. It does interesting things you don’t expect.”

Lamarche added that the mixing of “high” and “low” portraits speaks to the broader concept of how “iconic” artwork functions in our culture. “A lot of artists focus on these iconic images from popular culture, but I’ve never seen anybody do it in this way,” she said. “Many of these images of the “fine art” or the “high art” have become so commodified and so out there, that they actually are reduced to cartoon characters in some way — The Scream is on ties and cups and pillows and balloons […] It’s an interesting commentary on what is fine art and what happens to it when it becomes commodified.”

And, she said, viewers tend to read into the images, finding relationships between the different layers based on their own preconceptions. “There’s a tension between the frontal foreground and the background, and as a viewer, it really engages you because the narrative is really ambiguous,” she said. “People really look deep into it because the imagery is slightly obscured, and then they get involved in it, and they kind of complete the narrative.”

That’s just what Netter says is enriching about finally sharing his work–now he can hear what it inspires in other people. He compares his paintings to “grow monster” expandable toys that start out small but inflate once submerged in water. “[The paintings] were little flat things, and water makes them bloom — and the water is people,” he said. “They’re just dead otherwise, sitting there dead.”

If you want to learn more, catch Netter at the gallery in conversation with Sarah Douglas, Editor-in-Chief of ARTnews, on Wednesday, June 22 from 6-8 p.m.