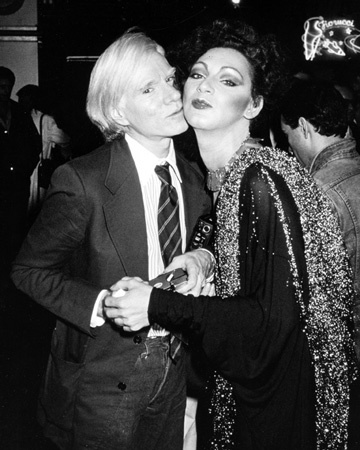 Holly Woodlawn, a transgender actress who achieved underground stardom with her affecting performance as a starry-eyed down-and-outer in the 1970 film “Trash,” died on Sunday in Los Angeles. She was 69.

The cause was complications of cancer, her manager, Robert Coddington, said.

Ms. Woodlawn had been in the outer orbit of the Factory, Andy Warhol’s studio headquarters, when she caught the attention of Paul Morrissey, Warhol’s partner in making experimental films like “Chelsea Girls” and “Flesh.” Mr. Morrissey cast her in “Trash” as the long-suffering paramour of a heroin addict who lives in squalor on the Lower East Side, played by Joe Dallesandro.

Her sassy, improvised dialogue and her vulnerability touched audiences and critics, many of whom were desperate to find a glint of redeeming light in a relentlessly sordid film. “Holly Woodlawn, especially, is something to behold,” Vincent Canby wrote in his review for The New York Times, “a comic book Mother Courage who fancies herself as Marlene Dietrich but sounds more often like Phil Silvers.”

With great aplomb, Ms. Woodlawn took her place in the Warhol pantheon alongside two other freshly minted stars, the transgender actresses Jackie Curtis and Candy Darling. Together they brought a daffy, deadpan style to Mr. Morrissey’s next film, “Women in Revolt,” also produced by Warhol, a satire on the women’s liberation movement, with Ms. Woodlawn playing a nymphomaniac fashion model who detests men and joins the militant organization P.I.G. (Politically Involved Girls).

“I didn’t know what the movement was when I made it,” Ms. Woodlawn told The Village Voice in 1970, before the film was released. “They told me you play a leader in women’s lib, and in my first scene I said, ‘O.K. girls, let’s get out and vote.’ ”

Ms. Woodlawn was born Haroldo Santiago Franceschi Rodriguez Danhakl on Oct. 26, 1946, in Juana Díaz, P.R., the child of a Puerto Rican mother and an American soldier of German descent who fled the marriage almost immediately after the wedding.

In New York, where she had moved to find a better-paying job, Ms. Woodlawn’s mother married a Polish immigrant, Joseph Ajzenberg, a waiter at the Catskills resort where she was working as a waitress. The three moved to Miami Beach, where Mr. Ajzenberg found work at the newly opened Fontainebleau hotel. Haroldo took his stepfather’s surname and Americanized his first name to Harold.

At 16, Harold left home and hitchhiked to New York, a moment memorialized in the 1972 Lou Reed song “Walk on the Wild Side.” It begins:

Hitchhiked her way across the U.S.A.,

Plucked her eyebrows on the way,

Shaved her legs and then he was a she.

The early New York years were rough. “At the age of 16, when most kids were cramming for trigonometry exams, I was turning tricks, living off the streets and wondering when my next meal was coming,” she recalled in her 1991 memoir, “A Low Life in High Heels: The Holly Woodlawn Story,” written with Jeff Copeland.

Continue reading the main story
She worked as a file clerk, modeled dresses at Saks Fifth Avenue, danced as a go-go girl upstate and waved to the crowd in Amsterdam, N.Y., from the back of a Chevy convertible as Miss Donut 1968. She considered, but rejected, having sex reassignment surgery. Information on survivors was not immediately available.

Ms. Woodlawn told various versions of how she chose the name Holly Woodlawn. In the first chapter of her memoir, she claimed she borrowed her first name from Holly Golightly, the heroine of the Truman Capote novel “Breakfast at Tiffany’s,” and the last name from Woodlawn Cemetery.

Several chapters later, she claimed that inspiration struck when she was watching an episode of “I Love Lucy” in which Lucy takes the No. 4 subway train in New York and sits underneath the sign indicating the train’s terminal points: Flatbush Avenue and Woodlawn.

In 1968, Jackie Curtis, a friend, cast her as a showgirl in a revival of her play “Glamour, Glory and Gold: The Life and Legend of Nola Noonan, Goddess and Star.”

The play, which also featured Ms. Darling, is remembered, if at all, as one of Robert De Niro’s first stage appearances. He played all 10 male roles. “I had a scene with him in which he played a Jewish producer; I was auditioning and he felt me up,” Ms. Woodlawn wrote in her memoir.

In 1969, Ms. Curtis cast her as one of the Moon Reindeer Girls in her campy musical “Heaven Grand in Amber Orbit.” Interviewed by a journalist from an alternative paper, Ms. Woodlawn announced that she was one of Warhol’s superstars.

This was news to Warhol and his acolytes, but Ms. Woodlawn’s impudence intrigued Mr. Morrissey and led to her star turn in “Trash.”

“They wanted me for one or two scenes at first,” she said in her 1970 Village Voice interview. “Paul Morrissey said, ‘Do this, do that, fabulous,’ and so they kept adding to my part. I worked six days at $25 a day. Except for the last scene, everything was done in one take. The clothes, the dialogue, like, everything was mine because the character I play is me. I’ve been in those situations.”

Her moment was brief. After “Women in Revolt,” she appeared as herself in the tongue-in-cheek documentary “Is There Sex After Death?” and took the lead role in “Scarecrow in a Garden of Cucumbers,” a low-budget 16-millimeter musical about a star-struck young woman looking for success in New York.

Her most ambitious performance came in “Broken Goddess,” a short black-and-white silent film in 1973 with title cards taken from lyrics by Laura Nyro and music by Debussy. In the film, originally written for Bette Midler, Ms. Woodlawn executes a series of extravagant gestures, wearing heavy Kabuki-like makeup.

She had some success as a cabaret artist in the late 1970s, appearing at Reno Sweeney in Manhattan, but by the end of the decade she was back in Miami, bussing tables at a Benihana restaurant and working for her father’s tax business. She relocated to West Hollywood in the 1990s and had occasional cameo roles in films like “Billy’s Hollywood Screen Kiss” in 1998 and, in 2014, the Amazon television series “Transparent.”

“I felt like Elizabeth Taylor,” Ms. Woodlawn told The Guardian in 2007, recalling her heyday. “Little did I realize that not only would there be no money, but that your star would flicker for two seconds and that was it. But it was worth it, the drugs, the parties; it was fabulous.”