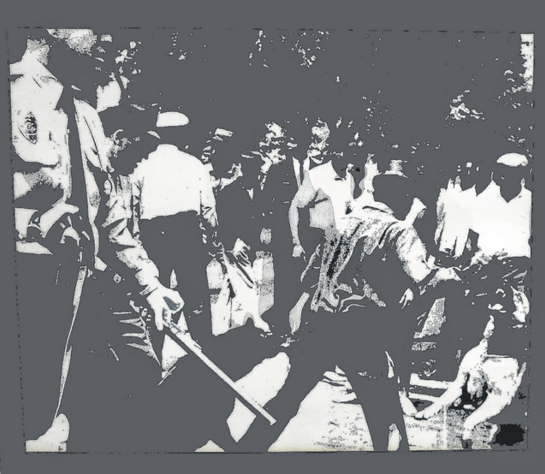 A classic work of art has found a new home inside the Department of History at The University of North Carolina at Pembroke.

Jimmy Parks, a 1967 graduate of the college, has loaned the department a 1963 screen print by Andy Warhol. The Warhol on display at UNCP is based on an iconic newspaper photograph of the Birmingham race riots, the print captures a tipping point in American history.

History professor Jeff Frederick, who studied Southern History in Alabama, said the 1963 events in Birmingham were a turning point for the civil rights movement and a tipping point for America in a turbulent era.

“In 1963, Dr. Martin Luther King Jr. and the movement were at a crossroads,” Fredericks said. “Going to Birmingham was his ‘Hail Mary.’”

On the infamous day of the photograph, Birmingham Police Chief Bull Connor turned dogs and fire hoses on peaceful protesters.

Parks, who is a retired teacher, recalled his friendships in Pembroke with the Brayboy and Lowery families. Tim Brayboy, who was his mentor, and Jane Lowery West, a classmate, attended the reception.

“I am a collector of art,” Parks told the audience. “I believe this is the right place for this work and I hope it stays a long time. I’m so happy it’s here.”

Dressed in a colorful print shirt, Parks told the story of how he acquired the Warhol print — and the shirt.

“I was wandering on the streets of Manhattan when I saw this print with a woman selling posters,” he said. “I wanted it, but it was $150. I opened my wallet and showed her I only had $100. We settled on $100, and I walked away with the print and the shirt.”

The print is worth considerably more today, but it is priceless to Parks. “I used it periodically in my classroom when we talked about culture and history,” he said.

Fredericks, who chairs the Department of History, thanked Parks for the loan, which will be displayed alongside a tribute to its owner.

“Warhol’s print is such a perfect combination of a piece of history and art that we jumped at the chance to have it on our campus. We are thankful to our campus partners for their help with this event and especially grateful to Mr. Parks for the loan of the print,” Fredericks said. “Students, faculty, and staff are welcome to come by the History Department to see the print in person.”

“What a unique gift from such a remarkable graduate of this university,” said Kristen Anderson, who helped organize the event for the university’s Office of Advancement. “This print is of history and it has its own story.

Anderson said the retired educator will continue “to teach through this gift.”

The Department of History is located on the second floor of the Adolph L. Dial Humanities Building at The University of North Carolina at Pembroke.