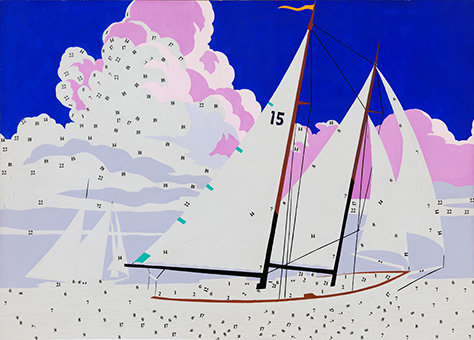 The Andy Warhol Museum in Pittsburgh has a wish list of pieces that it has always wanted for the collection. Warhol’s rare paint-by-number series from 1962 is one of them.

“That was in my top three list, along with a 40 by 40 ‘Marilyn’ and an early comic book painting,” Eric Shiner, the museum’s director, said, adding that these are the works “we’ve been after for a very long time.”

The series consists of just five works on canvas, including the “Do It Yourself (Sailboats)” painting, which has been acquired by the museum, with the help of the dealer Larry Gagosian. The museum traded deaccessioned works from its collection for the painting.

“Gagosian contacted me and said he was now the owner of this painting,” Mr. Shiner said. “He wanted to come to us first, knowing it was one of the key series we were after.”

With the painting, which elevates pop culture kitsch to high art, “Warhol is literally poking fun at the very concept of Abstract Expressionism, which is about free will,” Mr. Shiner said. “He is giving the artist rules that you have to paint in a certain place with a certain color. It is rigid, defined and instructive.”

Another paint-by-numbers Warhol work, “Do It Yourself (Violin),” is on view at the Met Breuer.