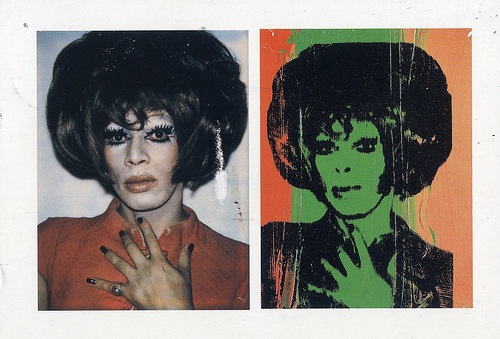 Andy Warhol is famous for his fondness for drag queens, but by 1974 his interest had faded. That year, he was approached by an Italian art dealer who wanted to commission a series of works on cross-dressers. Warhol said no.

The dealer revised his request: How about a series on drag queens who aren’t very good at concealing that they are men? That intrigued Warhol, whose favorite drag “superstars” were known for their meticulous presentation. The project interested him so much that after he had fulfilled his 100-piece commission — which immediately disappeared into a private collection in Italy — he continued the project for a long time.

The print and painting series that came out of that, “Ladies and Gentlemen,” is the heart of the new exhibit at the Wadsworth Atheneum Museum of Art in Hartford. “Warhol & Mapplethorpe: Guise & Dolls” includes dozens of examples of Warhol’s drag-queen Polaroids and artworks hanging alongside Robert Mapplethorpe photographs that also explore the issue of gender fluidity.

Patricia Hickson, the Emily Hall Tremaine Curator of Contemporary Art, said this facet of Warhol’s output is little known. The remaining 168 works were found among his possessions after he died in 1987. Since then, only a few American exhibits have focused on them.

“He found his subjects, men performing as drag queens, in a seedy club called The Gilded Grape in Hell’s Kitchen,” Hickson said. “They were not even remotely convincing in drag. They were still very masculine-looking.

“They were approached and told that they would be sitting for a ‘friend’ and be paid $50,” she said. “They didn’t know the friend they were sitting for was Warhol. Some of them might not have known who Warhol was.”

Warhol embraced the project because unlike the movie stars and socialites who commissioned him to create portraits that had to be flattering, the drag queens were paid to sit for him and he could do whatever he wanted to their images.

“With those portraits, he couldn’t do things like this,” Hickson said, referring to two large “Ladies and Gentlemen” portraits that are so artistically manipulated that the facial features are difficult to discern. “He could play with them, have creative freedom. These paintings show a lot of interest in brush stroke and unusual color palettes. I think he was really having fun with it.”

The centerpiece of the Atheneum show is 10 4 1/2-by-3 3/8-inch Polaroids of Warhol’s subjects, posing flirtatiously against blank backgrounds, and the 10 43 7/8-by-28 7/8-inch screenprints that were the result of those photo sittings. In the screenprints, which are owned by the Atheneum, bold swatches of color shoot across the backgrounds and faces, with blotches of red or pink across the lips.

The Andy Warhol Foundation for the Visual Arts in Pittsburgh loaned other Warhol works, smaller-scale acrylic and silkscreen ink on linen, that abstract and obscure the subjects’ faces even more, with a darker palette.

A 1981 series of photos by Christopher Makos of Warhol in drag also is featured in the exhibit. A fun video, one of several films in the gallery, shows the make-up session before the shoot. In the film, the usually taciturn and stone-faced Warhol chats amiably with the makeup man and sometimes even cracks a wee smile. The silvery wig he wore in the Makos shoot is displayed on a pedestal.

Robert Mapplethorpe — whose exhibit “The Perfect Moment” was shown at the Atheneum in 1989 despite protests throughout the country about its homoerotic content — is a natural kinsman to Warhol’s drag divas. He was fascinated by androgyny and people who didn’t conform to the gender binary. He turned his camera on himself in various guises and on others whose personas were sexually ambiguous or just challenging to conventional mores. His ethos is reflected by his lifelong best friend Patti Smith: “As far as I’m concerned, being any gender is a drag.”

Smith was his first muse. His photo of her for the cover of her debut album, “Horses,” was controversial at the time, hated by music producer Clive Davis because of Smith’s mannish appearance. Now the photo is legendary. Mapplethorpe captured a softer vision of Smith for the cover of her album “Wave,” in a filmy white dress and a meek gaze. A photo of Smith cutting her hair was inspired by Frida Kahlo, who cut her hair after she divorced Diego Rivera.

His second great muse was bodybuilder Lisa Lyon, whom he captured in a series of photographs that alternately emphasize her womanly beauty and her traditionally masculine musculature. A crop-haired, flat-chested dominatrix is photographed alongside Mapplethorpe’s brother, who has long, silky hair. “Aira,” seen in three photos, is a highly polished drag queen. Mapplethorpe shows her in a luxurious fur, which conceals her Adam’s apple, and a hat with a veil, which hides any flaws in her makeover. A gorgeous photo of model-singer Grace Jones shows a more feminine side to Jones, whose depiction by Warhol emphasized her severe, masculine aura.

The fun of Mapplethorpe’s portion of the show lies in images of the photographer himself — as a devil, as Patty Hearst, as a “West Side Story” gang member, as a cigarette-dragging tough guy, and as a drag queen, in eye makeup, lipstick and soft hair.