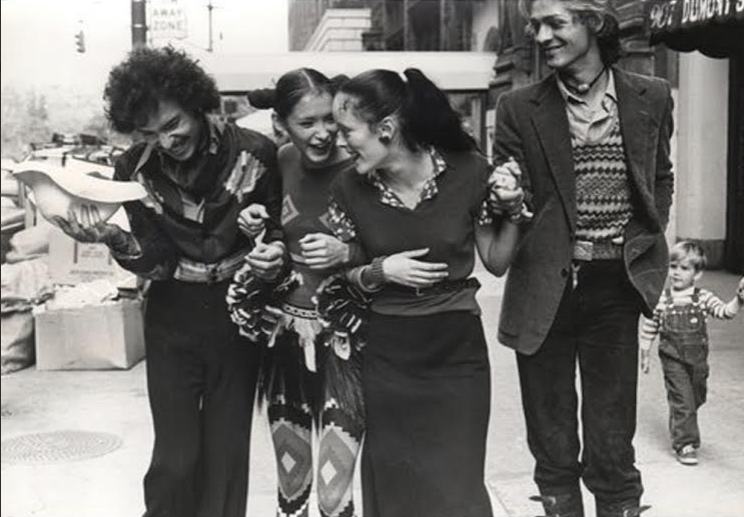 Who ever said a muse has to be a woman? Certainly not illustrator Antonio Lopez. Among the ’70s style icons visitors will discover at “Antonio Lopez: Future Funk Fashion,” the new El Museo del Barrio exhibit dedicated to the artist’s work, are models and mentees including Carol LaBrie, Donna Jordan, Jerry Hall, and Corey Grant Tippin—a handsome blond boarding-school grad from Connecticut who inspired and worked with Lopez. The two met when Tippin was a student at Parsons, and further bonded when they lived in Paris in the early 1970s.

At the suggestion of Lopez, Tippin, who was at the center of the mad mix of art and fashion flowing between New York and Paris, started doing makeup, enhancing the looks of distinctive models like Donna Jordan and Jane Forth for sittings with his mentor, and for Andy Warhol’s film, L’Amour, described by one reviewer as “a deliciously naughty saga of innocents abroad” (a phrase which also sums up Tippin’s years in Paris). Tippin, who was not averse to a wearing dab or two of makeup himself, got up to plenty of hijinks along the way, including prank-calling Pierre Bergé and Yves Saint Laurent, who cast Tippin for his debut menswear collection.

Tippin’s film work led to more beauty assignments, including with photographer Guy Bourdin, as well as a modeling contract. Not only was Tippin a self-described “witness”—with a full-access pass—to the fantasy and freakishness of the era, but through his styling, of himself and others, Tippin had a hand in creating the broader ideas of beauty that came to define that time.

Here, in an exclusive interview, Tippin—who went on to work with Martha Stewart before establishing his own decorating and antiques business—remembers working with Lopez, shares a makeup tip from Candy Darling, and talks about posing for The Rolling Stones’s Sticky Fingers album cover (yes, that’s him).

On sittings with Lopez and his art director, Juan E. Ramos
In those days, when Antonio started, that was an extremely respected and refined career. People were studying to be fashion illustrators. As a matter of fact, when I went to Parsons, that was the category that I entered. Antonio had the sense and the background and the power to understand that what he was doing was so essential and the conditions under which he worked were so professional and so of the moment [and] the highest quality—it was like being in Avedon’s studio. It was having the girl, having the right girl—having her groomed perfectly.

How did you get into makeup?
Andy [Warhol] made this movie in Paris called L’Amour and I’d been hanging out [in Paris] with Antonio and Antonio said: “You should be a makeup man.” There weren’t any makeup people in those days. The girls did their own hair and makeup and that’s why the models were so individual. They weren’t chameleons, they were giving you this interpretation of what they thought was beautiful. Diana Vreeland saw all that in people, she saw the individual presence of [a model] like Veruschka. I mean, Veruschka was always Veruschka; she got booked because she was Veruschka. Peggy Moffitt couldn’t be anybody but Peggy Moffitt, but she got booked because she was that incredible creature. That was the thing that so fascinated me about makeup and models—their incredible ingenuity of how they transformed themselves into this specific kind of message.

Did you create the beauty looks for Antonio’s portraits?
Oftentimes, I did. Antonio was, like myself, very, very interested in the essence, the individuality of the girls. He didn’t want to just use a catalog model or anybody, he liked to have real inspirational girls that he could work on and through the illustrations we could embellish them and define their character. He would over draw it in the pictures and then would copy it and then he would copy that so it was layers on layers on developing the looks of these extraordinary models that he used.

How did you end up walking in Yves Saint Laurent’s first menswear show?
My best friends were Clara Saint and Thadée Klossowski de Rola, who eventually married Loulou [de la Falaise]. Thadée . . . is a total aristocrat, he’s a blaaaast. I love him. They were a couple. I had no idea, I knew Clara worked somehow at Saint Laurent, but I didn’t pay attention. I guess she was the press attaché. Clara was from Chile. I loved her, we were inseparable. I think she was kind of pushing for me. I didn’t realize it.

I was so naughty. We tried to kidnap [Yves Saint Laurent’s] dog, Moujik—you know he kept having the same dog—and terrorizing [Saint Laurent] and Pierre Bergé. We got their private number [and] we would call them all the time and bother them. But I got booked for [Saint Laurent’s] first men’s collection. It was in rue Spontini, in the salon, really quiet with the creaky floors and carpets. We went into the little cabine and [Yves] dressed us, and he tied my tie and he said: “Voue êtes très chic,” and I was like okay: That’s my epitaph. That’s going on my tombstone.

It was a really good show. I felt like I nailed it for the first time. Pat Cleveland had taught me how to walk the way she learned how to walk. We were in an airport and we were killing time and so she said: “Okay, I’m going to teach you.” She taught me how to pivot, what to do with my head, hands, how to work the garment, everything.

Did you wear makeup on a regular basis?
Yes . . . to enhance my skin. I remember Fred [Hughes] and Andy [Warhol] pulled me aside and they were like: “We’ve got to talk to you.” I was like, “What? They’re like: “You’re wearing way too much makeup, you look like Holly or Candy.” And I was like: “Well, what’s wrong with that?” They didn’t know what to say. They were trying to give me fatherly advice and I was like: “I don’t think so.”

I read that Candy Darling gave you some makeup tips.
Candy used to take the mascara—it was Maybelline mascara in a tube—and she would heat the tube up on the stove so it got really hot inside the tube, and then she’d pull out the wand and put it on. It went on hot, and it really, really coated your lashes, really, really densely coated them. That was a good trick from Candy.

Now in those days they didn’t have Photoshop . . . there’s probably a little bit of cut and paste somewhere. Who knows? But not much. You know, you can tell your anatomy, if it’s you or not. That’s all I can say. That’s not my biggest claim to fame. I always tell people, just Google it and figure out whatever you think is the answer.