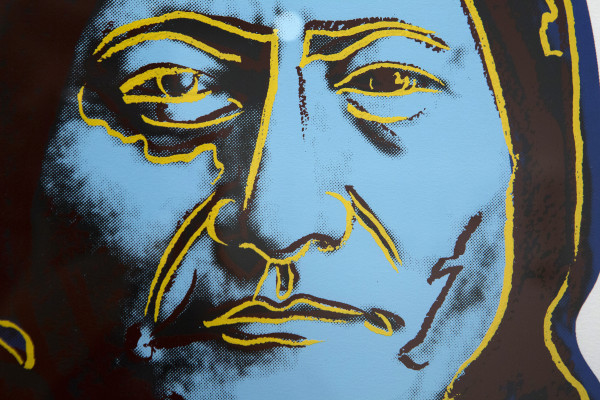 If you hang it, they will come — or, at least, that was the case recently at the University of Maine Museum of Art in downtown Bangor.

The museum is featuring dozens of works by well-known American pop artist Andy Warhol. Warhol gained recognition in the 1960s and 1970s and was known for challenging the idea of “what makes art.”

The current exhibit, called “Andy Warhol: Photographs & Screenprints,” features a blend of pieces already owned by the museum, a few donated and seven gifted by the Andy Warhol Foundation for the Visual Arts.

“Now we have a real collection — previously we had piecemeal. It feels more complete now,” Eva Wagner, education coordinator at the museum, said.

The exhibit, running through June 6, spurred several special programs and “academic dialogue” about the merits of Warhol’s work.

“He’s pretty significant historically,” Wagner said. “Especially when we’re talking about … challenging the idea of what art is.”

For example, in the dozens of Polaroid photos lining a four-walled space of the museum, Warhol features photos of famous characters, such as Farrah Fawcett, and images of people who include a woman simply labeled “unknown woman.”

Wagner said the photos remind her of today’s quick snapshots — selfies, photos of food or otherwise, that end up shared on social media.

“In my mind, he was a genius ahead of his time,” she said. “These are like something you’d see on Facebook or Instagram, a precursor in a way to that.”

Nearly 3,000 people have come to the museum from near and far to see the exhibit. Many were fans of Warhol’s work who traveled to Bangor just to see it. Most popular among the pieces was an image of Mick Jagger, which is unique because it is signed by Jagger and Warhol.

“This really has been one of our strongest shows. People love the idea of Warhol being here so close to home,” Wagner said.

However, the exhibit wasn’t without critics, not unlike the avant-garde artist himself. One man went as far as to tell Wagner he “hated” Warhol. Some critics don’t approve of Warhol’s unique style of derivative art, and others consider his work too “simple,” Wagner said.

While everyone looks at art differently, Wagner recommends people visit the exhibit with an open mind. She encourages patrons to look at the image straight on, about five to eights steps back, then inspect the details up close.

“Look beyond the simple; think about what he’s trying to say,” she said. “There’s a lot more to a Warhol than what meets the eye.”

Miss the exhibit? It’s not too late. The images are on display through June 6 and will be part of the Bangor Art Walk from 5 to 9 p.m. Friday, June 5. Staff at the museum will be on hand to talk about the exhibit and are hosting a free felt flower-making workshop in recognition of Warhol’s iconic piece, “Flowers, 1970.” For more information about the museum, which is free to the public, visit umma.umaine.edu or call 207-561-3350.