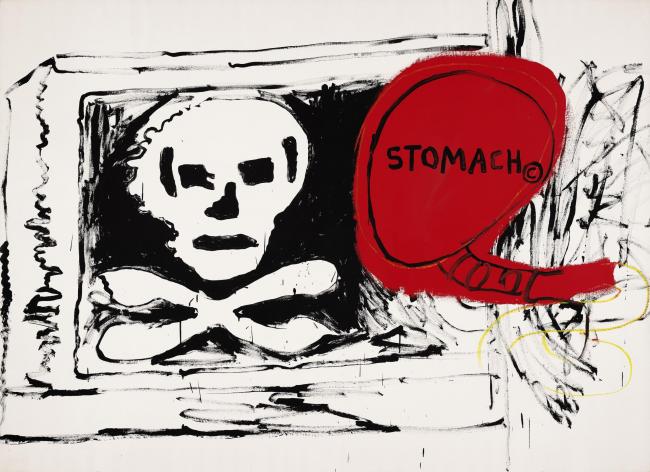 The untitled 6ft by 9ft picture is by pop art exponent Andy Warhol and Basquiat, who was only 27 when he died of a heroin overdose on August 12, 1988.

Before the auction at Sotheby’s in Paris last Tuesday, the acrylic, silkscreen and oil on canvas work had been expected to sell for between $795,992 and $1,137,132

Auctioneer Sotheby’s says: “Over the years, Sir Elton and his husband David Furnish have built up an extensive collection of contemporary art by iconic artists of the past five decades, including Willem de Kooning, Louise Bourgeois, Gilbert & George, Tracey Emin, Andy Warhol and Jean-Michel Basquiat.

Both visionary and inspired, the collection of Sir Elton John and David Furnish is not thus only a remarkable collection by its scope and quality,but also the result of a passion which says much about them.”

Sir Elton – real name: Reginald Dwight – owned Watford FC for eleven years, from 1976 until 1987, one of the most successful periods in the club’s history.

Sir Elton is an avid collector and owns around seven thousand rare vintage photographs, some of which will be exhibited at the Tate in London in November.