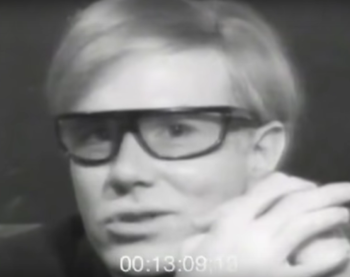 On Monday, the A.V. Club posted a YouTube video of an Andy Dugan–reported CBS Evening News story from December 31, 1965, about Warhol And Underground Film. The movement in New York City, which of course dovetails heavily with what was happening in the art world at the time.

Among those interviewed are Jonas Mekas, Piero Heliczer, and Stan Brakhage. Additionally there is footage of The Velvet Underground performing during the making of the Heliczer film Dirt. Also included is Andy Warhol (about his filmSleep, Dugan says “some critics praise it because it is so basic, without distractions”) and footage of Warhol filming Edie Sedgwick at a party.When asked about why he makes film, Warhol responds with a typically Warholian answer. “Well, it’s just easier to do. It’s easier to do than painting,” he states. “Because you just… The camera has a motor, and you just turn it on and you just walk away. It just takes all by itself.” When asked if there is “anything special” he is trying to say with his films, Warhol simply responds with a “no.”