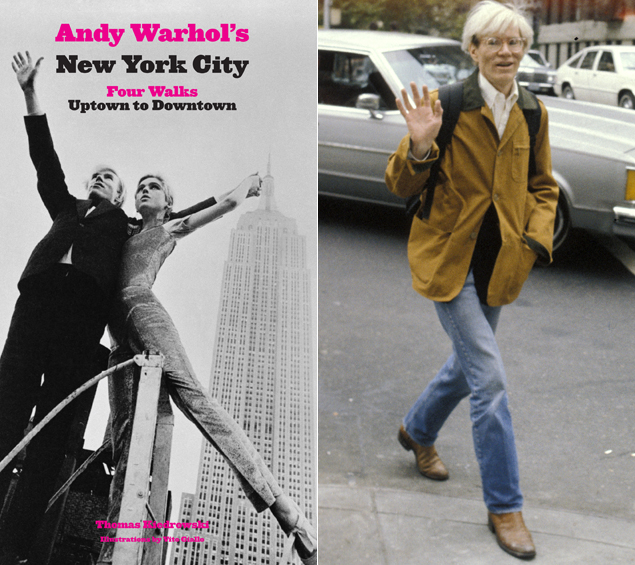 Andy Warholâs New York was one of diners and dives as much as it was the grandiose Palm Room at the Plaza Hotel. He loved eating alone, and had plans for restaurants around the city dubbed âAndy-Matsâ to provide countless thousands with the same immense pleasure of eating a frozen meal in a booth, alone with a television. Many of the older, familiar buildings the artist would have recognized have been razed, replaced instead by high-rise condos and bleak office spaces.

But for author Thomas Kierdrowski, mere glimpses into the artistâs life are enough. In his book, âAndy Warholâs New York City,â he details these spaces — from the imposing Empire State Building where Warhol recorded eight hours of flashing lights in 1964, to New York Hospital, the place of his 1987 death.

The guideâs four tours are split geographically, into two upper East Side walks, the Midtown tour, and finally, all of downtown, so thereâs little backtracking. I decided to trek around some familiar landmarks in hopes of seeing the artistâs faint fingerprints on his most famous haunts.

The Midtown tour begins at the Plaza, a frequent haunt of Warholâs. Kierdrowski writes the hotel-cum-condo boasts âan eventful history populated with literary and screen personalities.â This was also the place where Warhol attended Truman Capoteâs famed Black and White Ball in 1966, attended by all the glamerati of the day.

Being a child of the â90s, my first thought upon seeing the grandiose Plaza was one of Kevin McAllister, extra cheesy pizza, and of Eloise. But it wasnât difficult to picture silver-wigged Warhol bumping elbows with Liza Minnelli and Greta Garbo after stepping into the gorgeous revival building. Through the Eloise knick-knacks, I pictured the artist with a champagne flute in one hand trying to impress Capote (appropriately nicknames Ca-party by the press at the time) describing visions of a Manhattan full of Andy-Mats.

From there, the tour goes a block south to the legendary FAO Schwarz, where a stunned Warhol once had a recently-purchased teddy bear ripped from his hands by Salvador Daliâs wife, Gala.

This visit demanded more imagination on my part, as Fifth Avenue was blocked by a sea of cargo-short wearing tourists, eagerly snapping pictures with giant teddy bears and craning their necks to spot the giant keyboard that Tom Hanks made famous in the 1988, a year after Warholâs death.

And Studio 54 is no more â with the famed discotheque now housing the Roundabout Theatre Company. Iâve seen a number of plays here, and while the interior gives little hints as to its past incarnations (either as the notorious nightclub or as its original Gallo Opera House), itâs wonderful to think that any given building in New York holds so many secrets for those who wish to ask.

While the Warhol factoids have been fastidiously researched, it is disappointing that a book about New York and its history rarely explains when or why a particular building was torn down. (The author does lament the beautiful Art Deco Bonwit Teller department store, where Warhol purchased high-end fineries, was knocked down in 1980 to make way for Trump Towers. ) Those curious must take to researching a buildingâs history themselves.

But for anyone wanting to experience 15 minutes of Warhol, âWarholâs New York Cityâ proves a pocketable and palatable companion, providing equal parts history, context, and the high-flying influence and cool associated with the artist.

And in the words of the pop icon himself, âIt does not matter how slowly you go so long as you do not stop.â