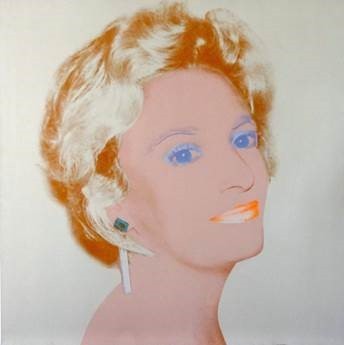 Masterpiece London has announced that a rare painting by Andy Warhol will make its first ever public showing at the Fair this June, courtesy of Long-Sharp Gallery. The work, entitled ‘The Socialite’, was created in 1986-1987 and depicts Olga Berde Mahl, an attorney and real estate agent based out of New York. Warhol created two portraits of Mahl, the second of which is still in her possession, which he used to pay in part for his studio at 123 Watts Street in 1987, which he used as an artist studio until his death.

Warhol’s portraits of women are among some of his most celebrated works and he has depicted many famous women in history, including Marilyn Monroe, Elizabeth Taylor, Jackie Kennedy, to name just a few. The piece comes with an affidavit asserting the authenticity of the piece.

Rhonda Long-Sharp, owner and director of Long-Sharp Gallery, says ‘”We reserved this exceptional, fresh to the market, hand signed work for exhibition at Masterpiece London.  The provenance — Andy Warhol to Olga Berde Mahl via her agent Ronald Feldman — speaks both to the integrity of the piece and our gallery’s decision to acquire it.”

Masterpiece London provides a platform for cross-collecting and presents art, antiques and design from over 150 of the world’s leading galleries. Save the Date: The 2015 fair will take place from 25 June – 1 July 2015 (with a Preview on 24 June), in the South Grounds of the Royal Hospital Chelsea, London SW3 4LW.