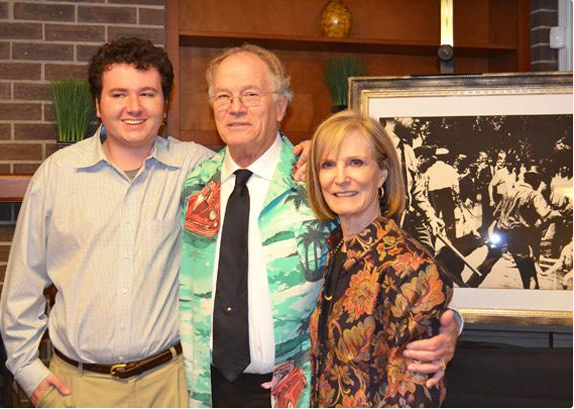 A classic 1960s-era screen print of an iconic photograph owned by a New Bern art collector has found a receptive exhibition home in the Department of History at UNC Pembroke.

Warhol’s attention was drawn to images of dogs, police and demonstrators in the Civil Rights struggle. Although he would become famous for images drawn from popular culture, art historians note this is Warhol’s first screen print, a medium that he would use throughout his career.

The screen print, taken from a famous newspaper photograph by photojournalist Charles Moore during the riot, captures a tipping point in American history.

Parks, a retired teacher from Carteret County Schools who lives in New Bern, is a 1967 graduate of UNC Pembroke, then known as Pembroke State.

He recalled his friendships in Pembroke with the Brayboy and Lowery families. Tim Brayboy was his mentor, and Jane Lowery West was a classmate. They were in attendance during an earlier presentation ceremony.

“I am a collector of art,” Parks said. “I believe this is the right place for this work, and I hope it stays a long time. I’m so happy it’s here.”

As collectors are always on the look out for unique pieces, Parks came upon the print during a stroll through New York City.

“I was wandering on the streets of Manhattan when I saw this print with a woman selling posters,” Parks said. “I wanted it, but it was $150. I opened my wallet and showed her I only had $100. We settled on $100, and I walked away with the print and the shirt.”

The print is worth considerably more today, but Parks said it is priceless to him.

“I used it periodically in my classroom when we talked about culture and history,” he said.
The print is on display in the Department of History, with a tribute to its owner.

It will spark the imaginations and stimulate critical thinking of all who view it, according to college officials.

In a discussion of the print, art professor Nancy Palm said that the print’s subject matter is not why Warhol is most famous. The print, however, demonstrates what Warhol is famous for: “the power of images,” she said.

“This shows how visual images affected American culture,” she said. “Warhol’s work demonstrates the power of mass circulation.”
History professor Jeff Frederick, who studied Southern history in Alabama, said the 1963 events in Birmingham were a turning point for the Civil Rights Movement and a tipping point for America in a turbulent era.

“In 1963, Dr. Martin Luther King Jr. and the movement were at a crossroads,” Frederick said. “Going to Birmingham was his ‘Hail Mary.’”
On the infamous day of the photograph, Birmingham Police Chief Bull Connor turned dogs and fire hoses on peaceful protesters.

Frederick, who chairs the Department of History, thanked Parks during a reception attended by 75 friends, faculty and students.

“Warhol’s print is such a perfect combination of a piece of history and art that we jumped at the chance to have it on our campus. We are thankful to our campus partners for their help with this event and especially grateful to Mr. Parks for the loan of the print,” Frederick added. “Students, faculty and staff are welcome to come by the History Department to see the print in person.”

“What a unique gift from such a remarkable graduate of this university,” said Kristen Anderson, who helped organize the event for the Office of Advancement. “We thank Mr. Parks for thinking of us, and we thank him for his generosity and kindness. He may be retired from the teaching profession, but he continues to teach through this gift.”