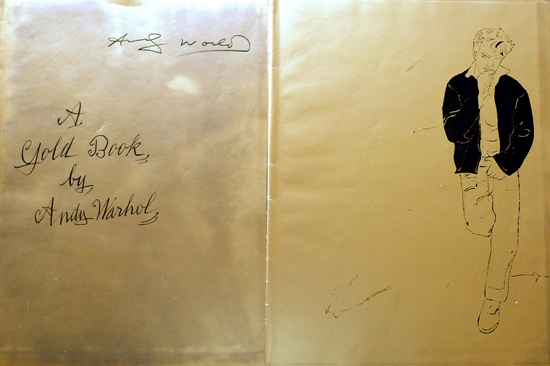 Almost as remarkable as Andy Warhol’s productivity, and ongoing ubiquity, is his variousness. The latest example of varied Andy is “Warhol By the Book.” With more than 400 items, it takes up most of the second floor of the Williams College Museum of Art, where it runs through Aug. 16.

“Warhol By the Book” is the latest survey of Warholian variousness. Photography and film? Last year, the Rhode Island School of Design mounted “Andy Warhol’s Photographs” and a selection of his “Screen Tests,” silent, single-take close-ups that last roughly four minutes. Graphic design? “Warhol Mania,” featuring posters and illustrations, ran last winter at the Montreal Museum of Fine Arts. Music? Closing in March was “Warhol on Vinyl: The Record Covers, 1949-1987,” at the Cranbrook Art Museum , in Bloomfield Hills, Mich. Fashion? A touring show, “Halston and Warhol: Silver and Suede,” closes Sunday at the Mint Museum, in Charlotte, N.C. Television? Warhol gets an entire gallery in “Revolution of the Eye: Modern Art and the Birth of American Television,” currently at the Jewish Museum, in New York. Like God, Andy, it can sometimes seem, is everywhere.

“Warhol By the Book” presents Warhol (1928-87) as author, reader, writer, and maker of books — not just artist’s books, but also his “Red Book” albums of Polaroids. There are also “Screen Tests” with such authors as the poets John Ashbery, Charles Henri Ford, and Allen Ginsberg.

The show includes dustjackets Warhol designed, original illustrations for books, and copies of books he illustrated. They range from children’s titles to a 1952 edition of “Amy Vanderbilt’s Complete Book of Etiquette.”

There are books Warhol owned. Did he read that Modern Library edition of Proust’s “Swann’s Way”? What about the volume of Jean Cocteau’s diary that he took with him on his final visit to the hospital, in 1987? The copy of “Alice’s Adventures in Wonderland” given to him by Philip Pearlstein, his friend and fellow aspiring artist at Carnegie Tech? The marginalia prove that he read his high school world history textbook. Warhol really never did throw anything away. An invoice from Record Printing and Offset Co. attests to that. Good businessman that he was, it’s one thing that we can be sure Warhol read.

Museumgoers are encouraged to browse through the titles in the mock-up of the library from Eothen, Warhol’s compound in Montauk, on Long Island. There’s his invitation to Truman Capote’s 1966 “Black and White” ball, in honor of Katharine Graham. The misspelling of Graham’s first name is the sort of arresting detail found throughout the show. The invitation is displayed near a 1960 Anchor Books edition of Stendhal’s “The Red and the Black” with a cover by Warhol. A black and red ball, with or without typos. Now that would have been something.

The books Warhol wrote figure prominently. Dictation was his preferred method of composition. No shame in that. It worked for late-period Henry James. “Warhol By the Book” includes a Norelco cassette recorder that he owned in the ’60s.

Warhol’s connection to books can be less direct, as in author portraits he executed in various media. Subjects range from Capote and Tennessee Williams to Hans Christian Andersen and Goethe.

Andersen and Goethe look a bit out of place. It’s hard to imagine them in the pages of Warhol’s magazine, Interview. Not that he cared about congruity, artistic or otherwise. So much of what makes Warhol Warhol has to do with the collision of unexpected elements: Elvis and Marilyn as quasi-Byzantine icons, soup-can labels as art, the appearance of studied vacuity masking a work ethic as furious as Picasso’s. The lion’s share of the show is from the ’50s; and the many drawings from that period testify to how much his line — spindly but decisive, simultaneously decorous and subversive — owed to Picasso and, even more, Matisse.

In an ideal world, Warhol would have done a portrait of Oscar Wilde — think of the Interview Q&A! — if only to remind us that Andy was almost as inspired an aphorist as Oscar. More than that, he created a persona as distinctive, and durable, as Wilde’s, if nowhere near as lush.

The implicit message of “Warhol By the Book” — a show at once weightless and massive, opaque and revelatory — is to affirm what a literary sensibility its subject had. In some ways, Warhol could seem almost preverbal. Silence was an extension of that monumentally blank expression of his. But so often what came out when Warhol actually did speak was positively Delphic. His genius as a cultural figure lay in being a one-of-a-kind doppelganger: both the emperor wearing no clothes and the little boy pointing out their absence. Maybe Andersen isn’t so incongruous after all.

A few miles east on Route 2 is another show dedicated to the intersection of visual and literary art. “Bibliothecaphilia,” roughly translated from the Greek, means “library fondness.” It runs at the Massachusetts Museum of Contemporary Art through Jan. 1, 2016.

Jena Priebe’s installation “The Secret Lives of Books” consists of garlands of paper — as from an exploded or extruded book — surrounding an easy chair and floor lamp. Jonathan Gitelson also invokes the pleasures of reading. His “Marginalia” re-creates a small library, with a particular emphasis on things found in books: not just written comments, but such objets trouvés as old photographs, Post-its, scraps of paper, and so on.

The blank bulk of Dan Peterman’s “The Polymer Catalog: one-ton archive” evokes the solidity, and staying power, of shelved books. Catholicity of belief reaches an illogically logical conclusion in Meg Hitchock’s “Texts” series, which consists of collaged words from all sorts of sacred texts, from the Koran to the Pledge of Allegiance. Susan Hefuna’s “Woman Cairo 2010/1431,” a dyed wooden carving, seeks to summon up the appearance of screens in Islamic culture and the way books allow a reader to remain in place yet intellectually travel.