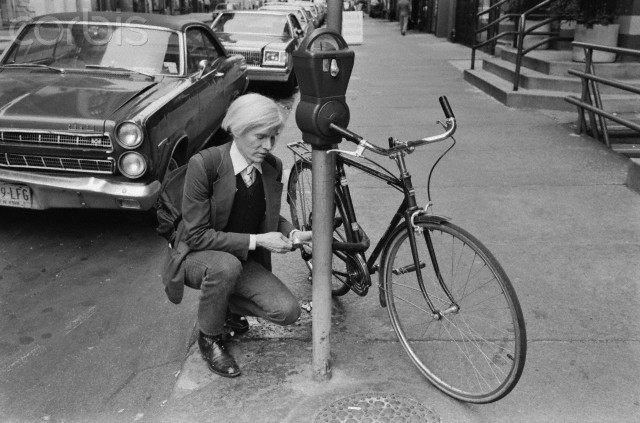 I once saw Andy Warhol on the streets of Manhattan riding his bicycle. The flash of his white hair was unmistakable.

It’s been almost 30 years since Warhol died in Manhattan’s New York Hospital on February 22, 1987. Since his death, Warhol’s star has not faded. His works still sell for unprecedented prices: In 2002, “Green Car Crash” sold for 71 million, last year “200 One Dollar Bills” was sold at Sotheby’s for a cool 43.7 million, and the artist’s 1963 work, “Eight Elvises,” netted 100 million.

Ask anyone on the street today what they think of when they hear the name Andy Warhol, and you’re likely to get different responses. Some see him as the hedonist filmmaker of the 1960s and 70s (Joe Dallesandro, where are you?). Others see him as a mediocre artist who got lucky when he fused commercial images with fine art, and came up with his own artistic hybrid. Still, others recall a manipulative artist who, while maintaining a rigid and highly disciplined work life, did nothing to “save” the hosts of men and women around him in the New York Factory who destroyed themselves with drugs in the name of “Art.”

But when Warhol’s diaries were published in 1989, the world saw that the most outrageous artist of the 20th century was really a very conscientious workalocholic who went to Mass every Sunday. The same man who made movies entitled “Heat” and “The Chelsea Girls” didn’t believe in modern (non-monogamous) marriages and was celibate. One could be forgiven for expecting to find in Warhol’s diaries an endless litany of sexcapades a la the Ned Rorem Diaries or Paul Goodman’s famous sex diary, “Five Years.” The great artist might as well have been a Trappist monk with an occasional penchant for voyeurism. In life, Warhol only posed as a jaded debauchee. It was, as they say, a big act.

As an artist, Warhol is mostly known for the Pop phase of his work, fusing high art with low art. One of his major influences was Walter Gropius, founder of the Bauhaus School of Architecture. Gropius believed that a “collective” of artists was necessary because the arts had become “isolated” in modern times. To forge this new unity among the arts, Gropius founded (and designed) the Bauhaus School in Dessau, Germany, in 1925. Much like Andy Warhol’s Factory, the Dessau Bauhaus School was a hydra-headed endeavor. Students and teachers alike worked together on the design of buildings, furniture, teapots, wall hangings, table lamps, photography and advertising posters. Gropius’ vision of a synthesis of the arts, just as Warhol’s marriage of the fine- and commercial art worlds, gave the world something brand new.

Before Warhol came on the art scene, the New York art world was ruled by the Abstract Expressionists. The Abstract Expressionists were exclusively male (women in that art world were relegated to making coffee or becoming lovers and mistresses of the Abstractionists). The Abstractionists were also excessively macho, alcoholic, and homophobic. Warhol, who was anything but macho, did however find much to admire in the work of Jackson Pollock.

A lot has been written about the Jackson Pollock crowd. In his diaries, Warhol refers to them as “hard-driving, two-fisted types who’d grab each other and say things like ‘I’ll knock your fucking teeth out’ and ‘I’ll steal your girl.’

“The toughness,” Warhol added, “was part of a tradition; it went with their agonized, anguished art. They were always exploding and having fistfights about their work and their love lives.”

But shy, little Andy couldn’t resist annoying these beefy Abstractionist thugs. Despite his soft spoken voice, he never ran from a confrontation. Perhaps this is why his friends called him “Drella,” a name that was a combination of Cinderella and Dracula. “I certainly wasn’t a butch kind of guy by nature, but I must admit, I went out of my way to play up the other extreme,” he wrote of his time with these guys. Rejected by the Abstract Expressionists for being gay and for his love of commercial art, Andy had no choice but to cultivate an artistic life as a contrarian.

In the 1950s and 60s, Warhol made it his mantra to keep repeating that the “snobbish distinctions between fine and commercial (so-called high and low) art were no longer valid.”

“A Coke is a Coke and no amount of money can get you a better Coke than the one the bum on the corner is drinking. All the Cokes are the same and all the Cokes are good,” he wrote in The Philosophy of Andy Warhol: (From A to B & Back Again).

Like many famous artists, Andy eventually felt trapped by the public’s expectations of him. They wanted him to produce more images of popular culture, but at this stage of the game he was getting sick and tired of the non-stop parade of society portrait commissions that were coming his way. He was also beginning to grow bored with his life of nightly clubbing in Manhattan.

Warhol left the world of painting in 1965 in order to make movies. The change was perhaps predicable, given that the prince of Pop art had worked with a diversity of media and styles. By 1965, he was calling paintings “old fashioned.”

“I don’t paint anymore,” he said in 1966. “I gave it up a year ago and just do the movies now. I could do two things at the same time but movies are more exciting. Painting was just a phase I went through.”

Warhol’s films, although they won awards among small artistic circles, never had the popularizing effect of his art. People did not line up for a Warhol premier.

Warhol’s future as an artist might have been different had he not met Jean-Michel Basquiat in the fall of 1982. Basquiat, originally a street artist, breathed new life into Warhol’s love of the paintbrush, and exerted enough influence that Warhol quit making movies after he made “Andy Warhol’s Bad” in 1976. The artist Keith Haring once said that “Andy trusted Jean even to the point that he would actually let him cut and sculpt his hair.” Warhol took Basquiat under his wing. Soon the two men were doing everything together, including filling the Factory with sweet-smelling pot smoke.

Later, under the influence of Pollack and painters like Ellsworth Kelly, Warhol came to paint works of art like “Red Disaster,” 1985, a painting which clearly demonstrates his fondness for the so-called “clean machine aesthetic.” His so-called “urine paintings,” which were influenced by Neo-Dadaist artists and Pablo Picasso, required him to paint with a sponge mop.

Sometimes art imitates life, and vice versa. After a death threat, Warhol went into a sporting goods store to buy a camouflage hunter’s hat, and proceeded to paint a series of Camouflage Paintings.

A year before his death, he painted a series of self-portraits. He also began a rash of religious paintings, such as The Last Supper, and a slew of acrylic and silkscreen works like ‘Heaven and Hell are Just One Breath Away,” “The Mark of the Beast, and “Repent and Sin No More.” In these last paintings of his there exists the influence of his childhood experiences of going to his Pittsburgh Byzantine Catholic church with its egg tempera and gold leaf icons.

In an old YouTube clip of Andy’s graveside service, one can see elaborately vested Byzantine priests swinging censors over the artist’s open grave.