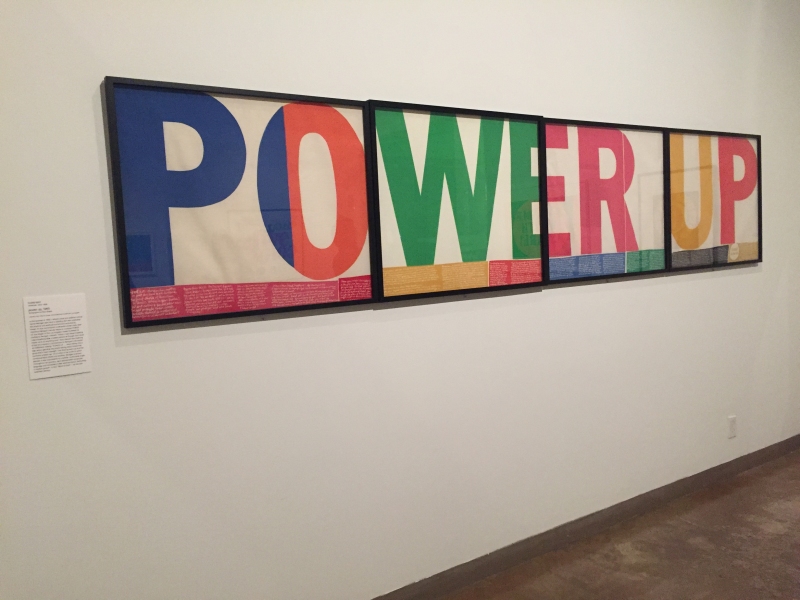 You’ve likely heard of Andy Warhol, but he’s not the only artist that influenced the American pop art movement. A visiting exhibition that opens at the San Antonio Museum of Art on Saturday, Feb. 13, highlights the work of one of Warhol’s lesser-known contemporaries, Corita Kent, who along with being an artist was a Roman-Catholic nun. Organized by Harvard Art Museums’ Susan Dackerman, the Corita Kent and the Language of Pop exhibit contains more than 60 of Kent’s prints and also includes work by Warhol and other pop artists of Kent’s time. “What Susan wanted to do with this exhibition, unlike other exhibitions that just include (Kent’s) work, was to really place Corita (Kent) in conversation with other pop artists,” said Anna Stothart, the museum’s Brown Foundation curator of modern and contemporary art. “She was always thought of as the nun that makes prints, but I would argue it’s one of the best bodies of print making I’ve ever seen.” Pop artists all created prints that were influenced by advertisements, news and other cultural pieces from their time. Here are a few things to know when visiting the exhibition, which is on display through May 8.

Six Sections
The exhibit consists of six sections (on display in six different numbered rooms). To really grasp the message of each requires taking a close look at everything you see. Words are written on the pieces in fonts that vary from large to small. Pay close attention to each letter and you might see some of the less obvious messages Kent was trying to communicate.

Early Work
Los Angeles 1962, the first section of the exhibition, sets up the rest of the show and provides a look at what Kent created during her early years as a pop artist. In 1962, Kent was living and working as a nun in the Roman-Catholic order of the Sisters of the Immaculate Heart of Mary in LA. The pop art movement was just taking off and the Ferus Gallery in LA exhibited all of Andy Warhol’s now iconic Campbell’s soup can pieces that year. Living in LA, Kent was taking the whole pop art scene in and her early work was influenced by what she saw. This is also the only section that contains just Kent’s work.

The Political Landscape
Just as Los Angeles 1962 provides a portrait of Kent’s early career, The Political Landscape section (the fifth room) offers a glimpse of the years when her work shifted. The pieces in this section were created following the decade in which Martin Luther King Jr. and Robert F. Kennedy were both assassinated and as the Vietnam War continued on. For her part, Kent left the Order of the Immaculate Heart of Mary in the late 1960s, quit teaching and moved from LA to Boston. On the East Coast, she began working with a professional printer, which meant her prints lost the handmade character they were marked by in her early days. Kent’s art at this time also incorporated her political side and used bolder colors and words than she’d used before.

Other Sections
Each of the six sections in the exhibition are must-sees. Along with Kent’s art, look for pieces by Warhol, Roy Lichtenstein, Robert Indiana, Ed Ruscha and Jim Dine. The second room, The Word, contains prints that have multiple words on them, sometimes arranged to relay subtle religious messages. The third section, Salvation at the Supermarket, focuses on prints that incorporate food and grocery brands. In the fourth room, L.A. Traffic, guests will see prints that relay cultural messages through traffic signs, and in the sixth space, Boston, 1971: The Gas Tank, visitors will see an oversized image and a small model that depict the 150-foot gas tank Kent painted while in Boston.

Learn about Kent’s 1964 print, “The Juiciest Tomato of All,” from Susan Dackerman, the organizing curator for the exhibition and a scholar at the Getty Research Institute. Dackerman, Ph.D., will discuss how the piece helped set Kent’s reputation as “a renegade” in stone.

Take a family tour of the exhibit and then stick around to try some pop art of your own. Kids will be invited to create collages and prints inspired by what they see at the museum. Hyperbubble will provide live music.

There are gallery talks/guided tours scheduled on Tuesdays and Sundays throughout the exhibition’s stay in San Antonio. General admission is free during certain hours on those days, so you’ll only have to pay the $10 surcharge to view Kent’s work and you’ll have the chance to hear about the exhibit as you tour.