Home Scoop The In-Crowd Is All Here: Regarding Warhola at the Metropolitan Museum 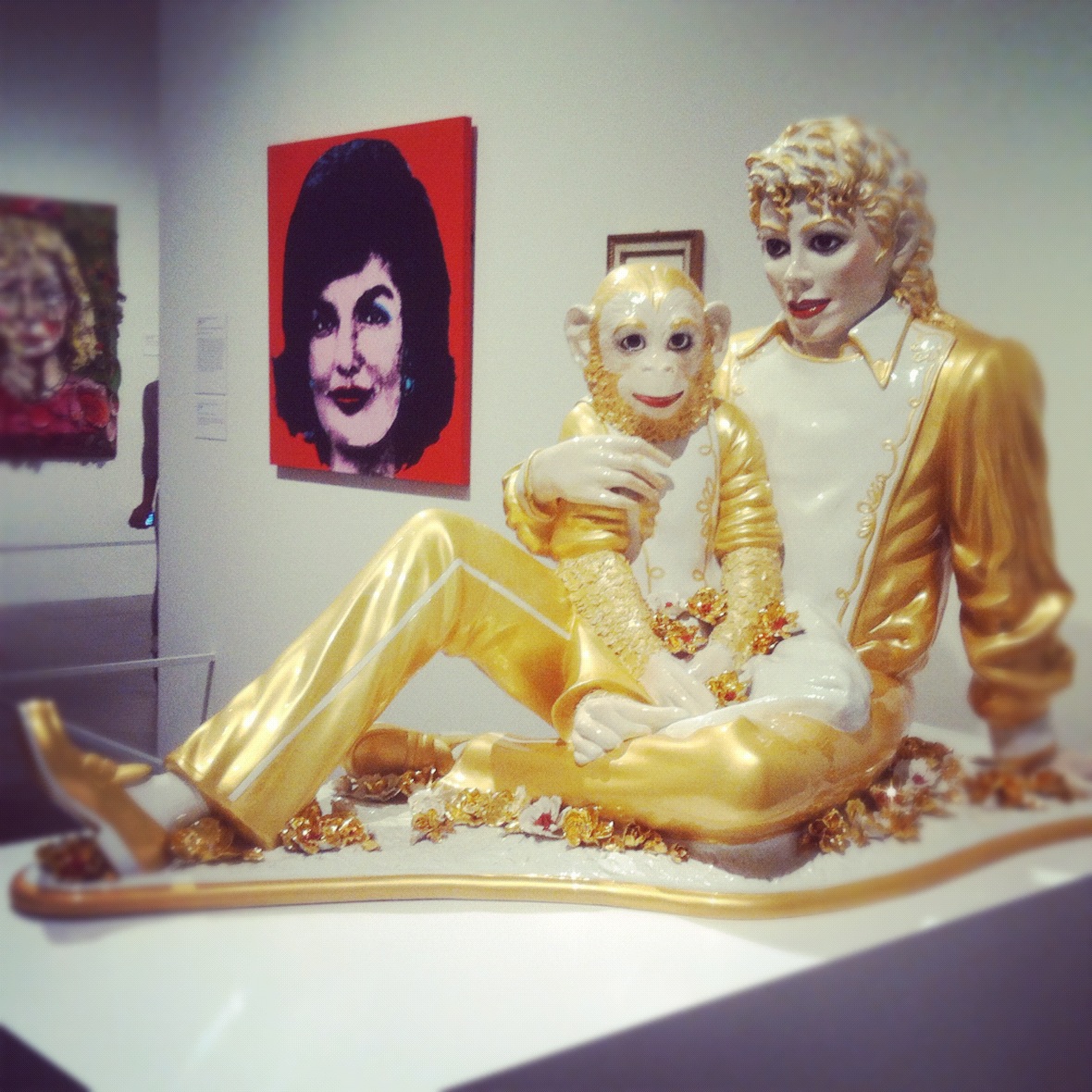 The Metropolitan Museum of Art has rushed in where museums more experienced in the new and the now might have feared to tread. It is highlighting its growing commitment to contemporary art with an examination of the immense, amorphous influence of one of the most important artists of the 20th century: Andy Warhol, the visionary Pop Art painter, innovative filmmaker, trenchant social observer, image thief, deadpan quotation machine, boho magazine publisher and forthright gay artist about town. This effort is not an encouraging sight, but then the Met has a long way to go where contemporary art is concerned.

In the quarter-century since his death at 58 in 1987 Warhol has become both big business â a staple of the current auction madness â and big art history, with scores of exhibitions devoted to individual aspects of his complex achievement. But the Met claims that âRegarding Warhol: Fifty Years, Sixty Artistsâ is the first effort to tackle the whole megillah. With nearly 50 works by Warhol and around 100 by the other 59 artists, this show (which is in previews for members through Sunday and opens to nonmembers on Tuesday) may be a hit with the public, but it should have been much more challenging and original. That it can seem that just about any artist from the last three decades could have been included testifies either to Warholâs influence or the showâs shapelessness.

Whether because it starts from an impossibly unwieldy concept, or is simply poorly executed, the exhibition is generally an enthusiastic muddle, intermittently clarified by unexpected works and enlightening juxtapositions but blighted by a crowded, discordant installation that allows few artists except Warhol to shine. Weirdly, a show devoted to the artist who said that in the future everyone would be famous for 15 minutes mostly dials it back to about 15 seconds for his fellow travelers.

Rife with failures of nerve and imagination, it seems like a return to an older, great-man, Ã¼ber-artist version of art history, crediting Warhol with everything from photo-based art to reality TV and even the contemporary interest in death. Tellingly, Robert Rauschenberg and Jasper Johns, whose use of existing imagery was essential to Warholâs, go unmentioned in the showâs wall texts.

He trained his movie camera on real people doing nothing but staring back at the lens, sleeping, eating or kissing; on unscripted actors and nonactors making things up as they went along; on the emblematic Empire State Building, which he filmed with a stationary camera for some seven hours one night. In painting he skimmed images from newspapers, enlarged them onto silk-screens and slapped them onto canvas, before or after adding splashes of off-register color. He was aided by a preternatural instinct for motifs of ever-growing resonance: portraits of Marilyn, Jackie, Liz and Mao, pictures of Coke bottles and soup cans, car crashes, race riots and electric chairs.

His two-tier process separated color from image, a radical move that made thinness a beautiful thing in itself, a perfect visual metaphor for the fragile, transitory nature of life and the basis for an indelible Warhol brand.

Organized largely according to subject matter, this show plays down that physical process and stints on Warholâs influence on abstract painting. Its main interest is Pop art and its postmodern derivatives, and it mixes in older artists whose work developed almost in parallel with if not in advance of Warholâs â Alex Katz, Richard Artschwager, Gerhard Richter, Sigmar Polke â without sorting out who did what when.

Donât get me wrong, this show provides a perfectly O.K. time. Thereâs plenty to look at and think about, as well as little landmarks, like the phrase âQueer Studiesâ as a section title, surely a first for this august institution. Among the visual high points is Jean-Michel Basquiatâs Neo-Expressionist painting of an immense scarified head in the fourth of 12 galleries. A marked departure from the showâs prevailing cool, it looks great; clearly African-American and seemingly about to explode, the head both rails against and is startlingly illuminated by its neighbor, Warholâs âOrange Disaster #5,â with its repeating electric chairs. Across the way Cady Nolandâs cutout of Lee Harvey Oswald crumpling from Jack Rubyâs bullets enlarges upon Warholâs silvery double image of a car crash.

In the fifth gallery, where the celebrity portrait bandwagon that Warhol supposedly initiated becomes overcrowded, Chuck Closeâs Photo Realist painting of the composer Philip Glass â a classic in shades of gray â looks wonderful next to examples of the slightly more vivacious film portraits that are Warholâs luminous screen tests, in this case of the singers Lou Reed and Nico. Near the end of the show three videos by the extraordinarily talented Ryan Trecartin capture Trecartin and his friends in mutating drag, carrying Warholâs collective filmmaking tradition and plays on gender to manic heights.

And then thereâs always the spine of the show to cling to, the cursory but largely satisfying Warhol retrospective that wends through the galleries, emphasizing painting while touching much too lightly on his innovations in sculpture and film. The showâs last hurrah is a reprise of his 1966 show at the Leo Castelli Gallery: fluorescent âCow Wallpaperâ and helium-filled silver pillows. The music of the Velvet Underground, the house band for the Factory, Warholâs famous studio-social salon, provides accompaniment.

But in the main, viewers are left on their own, peering at wall labels â which can be individually useful but donât do much to tie the show together â while ricocheting from work to work and name to name. The show relies too much on artists who are academically approved or market-hardy perennials, and, either way, relentlessly au courant. There is hardly a surprise, just a sense of name-check familiarity: Richard Prince, Jeff Koons, Cindy Sherman, John Baldessari, Ed Ruscha, Julian Schnabel.

They all belong here, but what about something less expected from them? Perhaps one of the five sculptures by Mr. Koons â the abundance implies his anointment as Warholâs heir â could have been replaced with a less familiar liquor-ad appropriation-painting from his 1986 âLuxury and Degradationâ series. These are printed in oil ink on canvas and push Warholâs mechanical painting processes to new extremes.

Most artists are represented by single, sometimes small works that donât carry much visual weight. Barbara Kruger, known for large appropriated images with political aphorisms splayed across them on red bands, contributes two magazine covers (for Newsweek and Esquire) that convey her signature style effectively but nonetheless become little more than footnotes here. Nearby, Sarah Lucas, of Young British Artist fame, is represented by a relatively small and demure work consisting of photographs of two magazine spreads featuring muscle-bound men, rather than her larger, far more visceral renditions of pages from British tabloids that drive home the objectification of women. Their debt to Warhol is balanced by a hot rawness all their own.

And speaking of visceral, where is the Swiss artist Thomas Hirshhorn, whose entire career has been fueled by a Warhol-like fixation on the news and who has fashioned his own hands-on version â another overheated one â of the Warhol photo-based strategy?

In many ways the âQueer Studiesâ gallery is the most cohesive, partly because Warhol fades somewhat into the background. (Two of his four works here, âTorso From Behindâ and a full-length portrait of Basquiat, are stupendously bad.) A real discussion about identity and the fluidity of gender ensues among works by Peter Hujar, Deborah Kass, Kalup Linzy, David Hockney, Douglas Gordon and others.

Thereâs still a certain miscellany. One of the two Robert Gober works in the gallery is a pale life-size wax cast of a manâs buttocks tattooed with several measures of music, a work more indebted to Mr. Johns than Warhol.

The show accelerates toward the end, piling up themes as space runs out and skittering slightly out of control. Appropriation, abstraction and seriality (art-worldese for repetition) are crunched together in two galleries headlined âConsuming Imagesâ that are almost disgracefully confused. The only non-Warhol abstractions are by Allan McCollum and Christopher Wool; the obvious exclusions include Rudolf Stingel, Wade Guyton and Josh Smith; Mary Heilmannâs slurry, jewel-colored canvases might have been considered.

This is followed by a gallery devoted to âBusiness, Collaboration and Spectacleâ in which works by Warhol, Mr. Koons and Takashi Murakami compete for space. The main motif is floral (although thereâs no really great Warhol flower painting on hand); the color is fun, and a glowing paint-on-velvet installation by Polly Apfelbaum is a welcome surprise.

âRegarding Warholâ has been organized by Mark Rosenthal, an independent curator, with Marla Prather, a curator of modern and contemporary art at the Met, and Ian Alteveer, an assistant curator. Mr. Rosenthal and Ms. Prather are veterans who have headed modern and contemporary departments at major museums. Still, neither curator has had much experience organizing large-scale surveys of recent art, which could be a sign either of the Metâs naÃ¯vetÃ© or its cynicism toward this material.

The catalogâs texts mitigate some of the showâs confusion. Mr. Rosenthal provides an insightful, accessible essay linking the works on view to Warholâs legacy. Rebecca Loweryâs chronology recounts Warholâs rapid rise to prominence and the debates surrounding his persona and achievement. Best of all, the artists in the show are heard from directly, in interviews conducted by Ms. Prather and in free-standing statements. They talk about Warhol or not, shedding personal light on his work or â almost as interesting â the durability of the artistic ego.

Mr. Ruscha admires Warhol for being the only artist he knew who âwas for everything and nothing at the same time.â Mr. Gober singles out his generosity as perhaps âhis true real influence and goad.â Ms. Kruger notes how the mismatches of Warholâs images and colors âbecome as resonant as de Kooningâs rapturously brushy orchestrations.â And Julian Schnabel simply says, âThere is something at the bottom of all his work that is absolutely heartbreaking.â