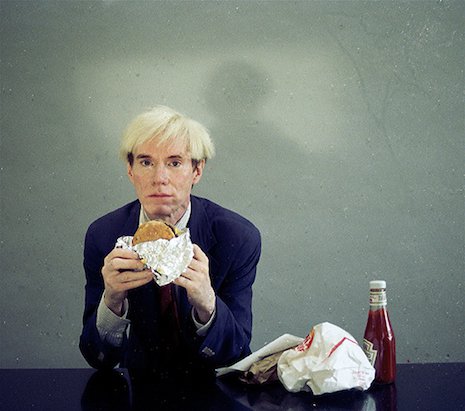 Shane Parrish at Farnam Street reminded me of an amusing passage from The Philosophy of Andy Warhol (From A to B and Back Again) in which he explains how to keep the pounds off.

But if you do watch your weight, try the Andy Warhol New York City Diet: when I order in a restaurant, I order everything that I don’t want, so I have a lot to play around with while everyone else eats. Then, no matter how chic the restaurant is, I insist that the waiter wrap the entire plate up like a to-go order, and after we leave the restaurant I find a little corner outside in the street to leave the plate in, because there are so many people in New York who live in the streets, with everything they own in shopping bags.

So I lose weight and stay trim, and I think that maybe one of those people will find a Grenouille dinner on the window ledge. But then, you never know, maybe they wouldn’t like what I ordered as much as I didn’t like it, and maybe they’d turn up their noses and look through the garbage for some half-eaten rye bread. You just never know with people. You just never know what they’ll like, what you should do for them.

La Grenouille was and is a fancy eatery in Midtown, by the way. If the above passage teaches you anything, it might be “Don’t take diet advice from thin people.” Having said that, however, the intersection of Warhol and food yields some interesting nuggets.

Not terribly surprisingly, Andy Warhol claimed that his only weakness for nostalgia had to do with the old-style automats like Schrafft’s, for which, remarkably, Warhol did a 60-second commercial in 1968 that consisted of a single voluptuous pan over one of Schrafft’s scrumptious chocolate sundaes. That commercial, alas, appears to be lost to the sands of time, but you can watch a 2014 “re-creation” of the commercial here.

My favorite restaurant atmosphere has always been the atmosphere of the good, plain, America lunchroom or even the good plain American lunchcounter. The old-style Schrafft’s and the old-style Chock Full O’ Nuts are absolutely the only things in the world that I’m truly nostalgic for. The days were carefree in the 1940s and 1950s when I could go into a Chocks for my cream cheese sandwich with nuts on date-nut bread and not worry about a thing.

A few lines later, Warhol writes, “Progress is very important and exciting in everything except food.” But that didn’t prevent him from proposing an eccentric dining solution for lonesome foodies:

I really like to eat alone. I want to start a chain of restaurants for other people who are like me called ANDY-MATS—“The Restaurant for the Lonely Person.” You get your food and then you take your tray into a booth and watch television.

Incredibly, as the blog Restaurant-ing Through History explains, that ridiculous Andy-Mat idea nearly happened in real life. Below is a picture of Warhol with three associates, architect Araldo Cossutta, developer Geoffrey Leeds, and financier C. Cheever Hardwick III; it appears that the picture was taken at some sort of announcement event for the Andy-Mat, which was to be “an unpretentious neighborhood restaurant serving homely comfort food at reasonable prices which was slated to open in fall of 1977 on Madison Avenue at 74th Street in NYC.”

For anyone who knows New York, Madison and 74th Street is a terrible place to place an “unpretentious neighborhood restaurant” serving food at “reasonable prices.” The plan was to include “pneumatic tubes through which customers’ orders would be whooshed into the kitchen. The meals served in Andy-Mats, in keeping with the times, were to be frozen dinners requiring only reheating.” Hooray, frozen dinners! Unsurprisingly, the restaurants never happened.