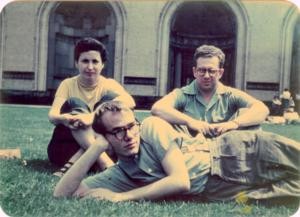 The Andy Warhol Museum announces its latest exhibition, Pearlstein, Warhol, Cantor: From Pittsburgh to New York, opening to the public May 30, 2015.

This exhibition explores the work of Philip Pearlstein, Andy Warhol, and Dorothy Cantor as students at Pittsburgh’s Carnegie Tech (now Carnegie Mellon University), and as young, aspiring artists in New York City. This period of the late-1940s to early-1950s was one of close association between Warhol and Pearlstein as they were fellow students, roommates in New York, and enthusiastic artists working in commercial illustration. Cantor, one year behind them in school, was equally pursuing her work, but abandoned her practice to start a family with Pearlstein. This exhibition-co-curated by Jessica Beck, assistant curator of art, and Matt Wrbican, chief archivist-is the first to study this important early period for the three artists.

“This exhibition sheds light on the student work of all three artists-a period of an artist’s career that is usually reserved for research,” says Beck. “For the first time, audiences can see these early assignments and discover how the artists hesitantly and yet boldly found their way in the competitive art world. This glimpse into the past provides a new and exciting context for seeing their mature work.”

With Pittsburgh as the starting point for all three, this exhibition features a collection of rarely seen paintings and drawings for the students’ assignments from their Carnegie Tech professor Robert Lepper. The works include images of Pittsburgh cultural landmarks: the dinosaur fossil displays at the Carnegie Museum of Natural History, the interior of the Carnegie Music Hall, the old Duquesne Gardens arena, and others.

Pearlstein and Warhol graduated in 1949 and headed to New York City, where they both worked in graphic design. Warhol was immediately successful as a commercial illustrator with his blotted line drawings, whereas Pearlstein struggled to hone a marketable style, and instead began drafting book covers and industrial manuals, while working with some of the great graphic designers of the 20th century. Cantor struggled to find her way in the male dominance of New York; in 1950 she and Pearlstein married, and in the late 1950s Cantor abandoned her art to begin a family. Among other works, the exhibition presents her visual explorations of the built environment: bridges, highways, and Manhattan’s labyrinthine subway stations.

Told alongside the story of the trio as they relocated from Pittsburgh to New York is Pearlstein’s path from art school to the military, and back again. Pearlstein entered Carnegie Tech in 1942 before he was drafted in 1943 and assigned to the Training Aids Unit, where he first learned the screenprinting process and developed weapons assembly diagrams and map symbols. In 1944 he was sent to Italy, stationed near Naples, Rome, and then Florence, spending his leave time studying Italian Renaissance frescos.

Pearlstein first met Warhol when he returned to Carnegie Tech in 1946 on the GI Bill. He committed himself to carving out a distinct style, moving away from genre painting to experimenting with abstraction, a style he maintained until the late 1950s, when he progressed from painting landscapes to figures. Turning away from abstraction, Pearlstein became committed to figurative realism, his signature style. The current exhibition includes Pearlstein’s most-recent paintings-a never-before-exhibited new series featuring nude models wearing antique animal masks. This late series represents what Pearlstein refers to as his “most complex work to date.”

Supplementing the exhibition are period photographs of Pearlstein, Warhol, and Cantor in Pittsburgh and New York. An illustrated exhibition catalogue supported by Betty Cuningham Gallery featuring Pearlstein’s memories of those times accompanies the show.

Exhibition support is provided in part by The Fine Foundation.