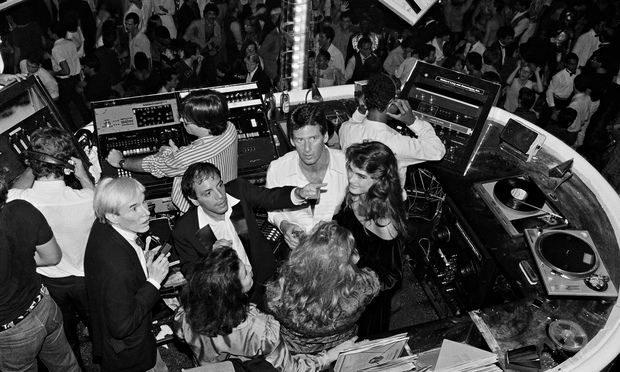 God may have made the boringly bucolic country, but the devil made the town. Ever since Sodom and Gomorrah, cities have been synonyms for vice, infernos of wicked delight where prohibitions collapse. In New York during the late 1970s, the favoured location of the beautiful and the damned was Studio 54 – a defunct television studio on West 54th street, reoutfitted as a spangled nightclub where a thousand customers could drink, dance, drug themselves, and retire to a shady balcony to have public sex.

Americans have a constitutional right to pursue happiness; at Studio 54 they pursued frenzy, impelled by a disco beat that matched the rhythm of a nitrate-accelerated heart. In the 1960s radicals agitated for liberation. What they got instead, between the end of the Vietnam war and the start of the Aids epidemic, was a crazed libertinism. Deserted by the middle class, New York was near-bankrupt but its danger and squalor suited the mobs of noctambulists who clamoured to gain entry to Studio 54.

The owner, Steve Rubell, personally controlled the mix, and specified that 20% should be gay men, pumped-up and poppered in readiness. A 10% quota was reserved for lesbians and transvestites. Celebrities, meaning those who were celebrated for their bad behaviour not for any particular achievements, were ushered past the frantic queue and handed vouchers for complimentary drinks. President Carter’s mother, dotty Miss Lillian, turned up once, as did Margaret Trudeau, the capricious wife of the Canadian prime minister.

A despotic snobbery prevailed at the front door; inside, Studio 54 was a rowdy democracy, where individuals were reduced to mashed, polymorphously entangled bodies. The place resembled a depraved cathedral, with a dome where lasers mimed demonic lightning storms. DJs presided in a raised pulpit, and the altarpiece was a neon sign representing the man in the moon, with a suspended spoon that rocked to and fro, delivering twinkly snorts of cocaine to his greedy nose.

Andy Warhol called Studio 54 an experiment in creating a “New Society”. For the Swedish photographer Hasse Persson, it was an anthropological laboratory, a human zoo where – by contrast with the eugenic sameness of his compatriots in Stockholm – female cowboys consorted with defrocked nuns or male ballerinas dressed as randy swans. In Persson’s jittery images, a fanged Dracula materialises on the dance floor at Halloween, along with Lady Godiva on a white horse. A figure swathed in bandages might have escaped from an emergency ward, or perhaps from an Egyptian sarcophagus. On the sidelines, deputising for photographic voyeur, hover Warhol with his tape recorder, and the glum, gnomic Truman Capote, concealing his inquisitorial gaze behind dark glasses

Rubell’s error was to brag about his skimmed profits, and in 1980 he was jailed for tax evasion, after a terminal party billed as “The End of Modern-day Gomorrah”. Mark Fleischman, the new owner, kept Studio 54 going until 1988; he then detoxed at the Betty Ford clinic, and cleansed his sullied soul on a Mexican mountain.

All American stories have to end with redemption. In 54, Mark Christopher’s 1998 movie about the club, a New Jersey cherub played by Ryan Philippe is corrupted during his time as one of Rubell’s bare-chested bartenders. Just in time, he abandons debauchery and becomes a hair-gelled yuppie, equipped with a business degree from New York University.

The name of Rubell’s lair and its decor were acquired by a Las Vegas casino, though when the man in the moon was rehung from the MGM Grand’s ceiling he was deprived of his coke spoon. Back in New York in 1998, the Roundabout Theatre Company staged the musical Cabaret at Studio 54, with Alan Cumming as the epicene host of the Kit Kat Klub, a hideout for Berlin’s raffish bohemians in the early 1930s. The analogy with the Weimar Republic might have been troubling, but whereas the Nazis closed down such establishments and gassed their dissident patrons, in America there was, of course, a happy ending. Reaganomics restored New York to solvency, and a city that had served as a playground for outcasts became a fortress guarding plutocrats.

The nondescript slab just off Broadway, still known as “the Studio 54 building”, now mostly consists of floors laid out as offices, with open-plan “bullpens” that hardly deserve their bestial name and segregated toilets where no one cokes up or copulates. The current tenants include a “college of allied health” which trains surgical technologists, and a securities firm whose offerings include one entitled OPIUM – not a drug, but a means of analysing stock placings and “navigating large liquidity events”. The 1970s have become ancient history: is that why the revellers in Persson’s monochrome photographs look like unquiet ghosts, bound to return at dawn to the purgatorial flames?