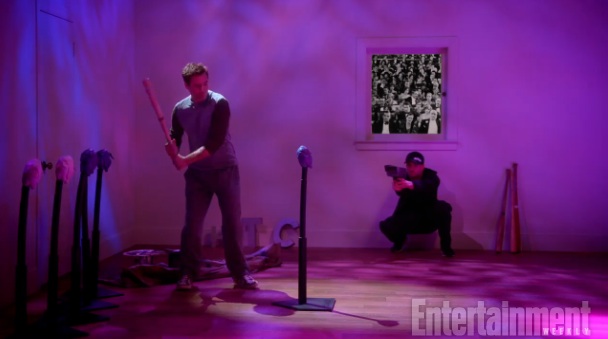 Can an ad be art—and vice versa? Robert Downey Jr. is testing that question with a series of nine 30-second short films, sponsored by a cell phone company to promote their new device.

The color-coded series is called the M9 Project, after sponsor HTC’s new phone, but the only reference to that is a title card at the end. Otherwise, the shorts are product-free with Downey Jr. himself and creative director Russell Scott of Jetset Studios given liberty to devise a series of surreal experiences for their hero and his onscreen friend/nemesis (played by Brian Schaeffer.)

The shorts dabble in a variety of genres: comedy, horror, film noir, and fantasy among them. Taken together, they make one dreamlike story—each one taking its inspiration and tipping its hat to some other film or piece of art, including Downey Jr.’s own father.

“They were inspired by the lifetime of popular culture that we’ve all ingested,” said Scott. “There are film references, there are TV references. There’s a lot of physical comedy, and a whole different, almost silent-movie type of acting. There’s no real messaging or hucksterism.”

Every company wants a viral video, but if you force the hard sell on viewers they always turn off. Hiring the world’s biggest movie star and giving him freedom to play with the camera seemed like a way to engage viewers. “That was literally the mandate. ‘We want you guys to create some viral content,” said Rob Hackett, creative executive with the actor’s production company, Team Downey. “So we all started drawing on Robert’s inspirations and our inspirations.”

“The throughline from The Prisoner, which was a product of the 1960s, and Andy Warhol and the films of [Downey Jr’s] father, there’s very much a pop art, subversive feel to what we were trying to achieve,” Scott said.

Below is one short and its inspiration.

You’ve heard of Pop Art. Now combine that with baseball and a pop fly.

Influence: Andy Warhol’s portrait of Pete Rose, a 1985 four-quadrant screen print of the baseball great as he neared the record for baseball’s all-time hits record.