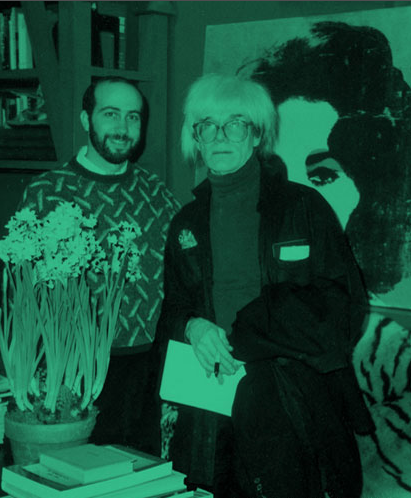 In 2011, when the Warhol Foundation decided to shutter its Art Authentication Board, the reigning authority on Warhol authenticity, to focus on its grant-making activities, it said the move was in part motivated by a desire to avoid lawsuits from collectors who disagreed with its judgments. Subsequently, authentication boards for Jean-Michel Basquiat, Keith Haring, Robert Motherwell, Roy Lichtenstein, and Alexander Calder have followed suit.

This week, however, sees a reopening of sorts for the market for Warhol authentications, as art dealer and author I Bought Andy Warhol I Sold Andy Warhol (Too Soon) The Art Prophets: The Artists, Dealers, and Tastemakers Who Shook The Art World and Richard Polsky announced that he has launching Richard Polsky’s New Warhol Authentication Service, “a company devoted solely to authenticating the work of Andy Warhol,” according to a press release. On his website, Polsky explains his $2,500 method of evaluation: “[My] decision is ultimately based on thirty-plus years of involvement with Warhol’s art….If you have spent your entire career immersed in an artist’s work, you develop a sixth sense about what is authentic and what is not.” In a quick Q&A below, Polsky talks about why Warhols are easy to fake, how his process works, and what he is hoping to achieve with the project.

How do you go about authenticating an Andy Warhol? On your website you say you have a sixth sense for this.

Richard Polsky: Well let’s say you call me up and say, “Richard, I think I have a Flowers painting.” You would send me JPEGs of the front and the back, and I would also ask you to provide me with the provenance. Since Warhol often worked in a serial format, I would look at your [alleged] Flowers at that point, and see if it’s in the catalogue raisonné, and if it’s not, I’d ask you where you got it. In other words, your information would have to make some sort of sense. If you said to me, “Oh Richard, my mother bought it at such-and-such gallery in Cleveland, Ohio,” I’d be able to check on that, and say, “Hey wait, there is no such gallery in Cleveland, Ohio, in the ’60s. We’ve got a problem here—let’s talk some more.” Also, if you’ve done something all your life—and I’ve done this all my life—you do develop a sixth sense, visually speaking, whether something looks right or not. I’ve seen a lot of fake Flowers. I’ve seen a lot of fake Electric Chairs. So it’s a combination of experience and logic and, of course, if I have any questions, I would call colleagues of mine who know a lot about these things. In other words, you could piece this together, very cleanly and very logically.

Well, yeah. You know what it is? I saw there was a real gap in the art market, and as I pointed out, once the Warhol people went out of business it was like a domino effect where the Basquiat, the Keith Haring, and the Lichtenstein people basically said, ‘We don’t need the aggravation—we don’t want to do this anymore.’ And the crux of collecting art is authenticity—it has to be real, what you’re buying. As a result, it sort of occurred to me—it’s like, “Wow, no one’s doing this. Someone really needs to do this. It’s a really necessary thing that has to happen.” And I was thinking, “I’m really qualified, I’ve been around a long time, I’m going to take the plunge and do this.” But I also believe that authenticity is at the core of buying a work of art, so it’s important that the someone qualified comes forward to authenticate work by Warhol, Basquiat, Haring, Calder, etcetera. Right now, art world experts live in fear (including university professors) of giving their professional opinions because of potential lawsuits. The art world can’t go on this way.

Do you carry liability insurance?

Yes, we carry liability insurance. You can read the language that is used to indemnify me from potential lawsuits on my website, under “Submitting By Mail.” [It reads: “Simply stated, you are agreeing not to sue us if you are unhappy with our decision or if our ruling is not accepted by others.”] Hopefully, by being fully transparent with the client, there won’t be any problems.

My understanding is that Warhols are easy to fake. Why is that?

Warhols are easy to fake because [Warhol] used that photo-silkscreen process, which isn’t hard to do. He was also highly prolific—he made over 10,000 paintings in his life, plus thousands more prints, drawings, photographs, sculptures…it goes on and on. Also, a lot of monkey business went on in the early days of the Factory. Sometimes, when Warhol wasn’t happy with his paintings, he’d throw them in the trash. Sometimes he’d run his paintings off on stretched canvases, or his assistants or friends would come by and they’d say, “Hey Andy, that looks kind of cool, can I have that?” And he’d say, “Sure.” And then they’d say, “Oh, Andy, would you sign this for me?” And he’d say, “Sure.” Things moved pretty fast, so as a result a lot of things got lost to history, so to speak.Have you ever seen the Warhol catalogue raisonné? It’s not done yet—they’re only in the 1970s so far—but they’ve done a very good job of listing every work we know of. But no catalogue raisonné is ever complete or perfect. There were a number of paintings that the Warhol Authentication Committee said were not authentic, even though I thought they were authentic. I’ve seen a lot of paintings that Warhol never finished but that somehow made it out onto the market. I’ve seen paintings with multiple-image canvases and paintings where a strip was cut [out of the canvas] with an X-Acto knife because Warhol probably wanted to change the composition, but somehow that extra strip ended up in the art market. It’s just a lot of stuff. And of course, there are fakes, and there are paintings that were run off at night without his authorization. I can go on and on. It’s a very complicated subject, but you’re correct, they are easy to fake. I can’t think of an artist who would be easier to fake, in fact.I’ve served on authentication panels throughout my life, and if you’ve hung out with something all your life, you can see what’s authentic and what isn’t. It’s really a sixth sense you develop—you just know [what’s real]. Let me ask you a question. Have you ever seen the documentary about Jackson Pollock?

In one of the scenes, Thomas Hoving—the head of the Met—is asked to look at a Jackson Pollock that is clearly a fake. He looks at it for a few seconds and he goes, “Yes. It’s fake.” Everyone else was like, “But you hardly looked at it! You spent three seconds looking at it. How do you know it’s a fake?” He said, “Of course I know.” And that’s exactly what I mean—of course he knew. He was a connoisseur. It’s like a sport you’ve done or a hobby you’ve been involved in all your life. It doesn’t mean I’m infallible. It doesn’t mean I can’t make a mistake. But I’m going to be accurate, you know, an awful lot of the time.