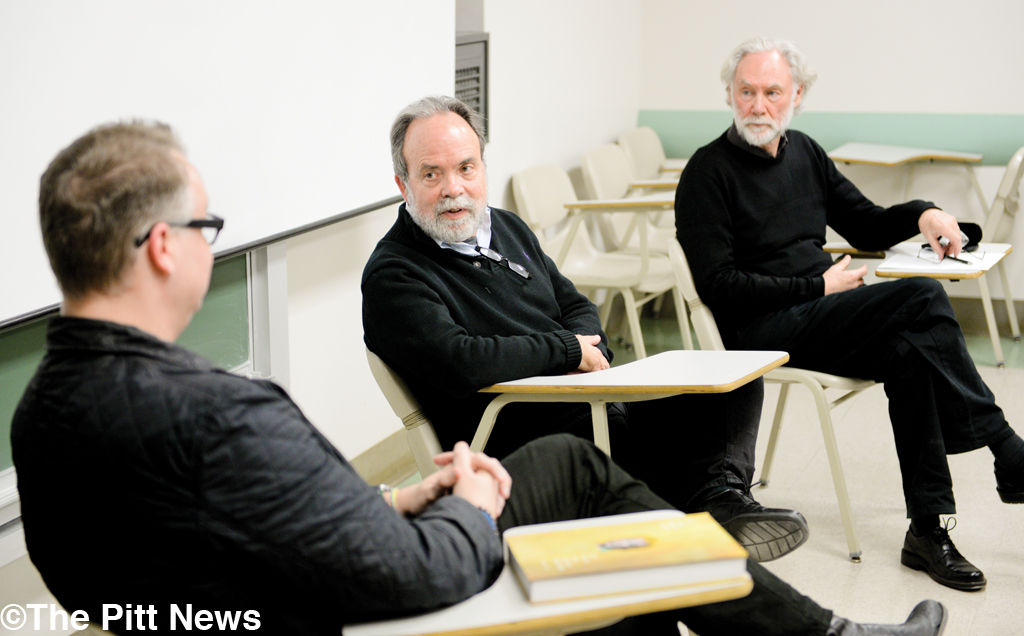 Although it’s not as timeless as Renaissance sculpture, three art experts argued on Wednesday night that pop art deserves its place in the modern art world.

Terry Smith, a Pitt professor of contemporary art history and theory, joined scholars Thomas Crow and Eric Shiner to discuss the relevance of pop art. The event, held in the Frick Fine Arts Building, centered on Crow’s new book, “The Long March of Pop: Art, Music and Design, 1930 – 1995.”
Crow is a professor of modern art at the Institute of Fine Arts at New York University, and Shiner is the director of the Andy Warhol Museum. Smith organized the panel, “A Discussion of The Long March of Pop,” as a part of the Pittsburgh Cultural Consortium, which strives to bring together students and museum professionals.

“The Long March of Pop” focuses on the immersion of pop art in a larger cultural context. The panel discussed the paradox of timelessness in pop art, focusing on artists like Andy Warhol and James Rosenquist, who used bold colors and themes that captured a fleeting time period largely steeped in a culture that emphasized advertising.

The panelists compared traditional fine art to pop art. They agreed that fine art is timeless, meaning it is classic and transcends history.
“Timeless used to be a fashion that we made fun of,” Crow said. “It’s rotting from the moment it’s made.”

Crow said that pop art doesn’t capture the same classic timelessness as fine art, but “it’ll never date,” because objects that can’t last, like Warhol’s depictions of a young Marilyn Monroe, are fleeting and powerful.

Building off of Crow’s view of pop art’s place in time, Smith said, “The image can’t last … although the moment it hits you is absolutely extraordinary. [It’s] contemporary forever.”

Shiner said that, although fine artists used expensive and high-quality art materials, Warhol used cheap materials and paints to get the bold, flashy effect that he desired. He said that, contrary to popular belief, Warhol is a difficult artist to fake because of his complex photographic process of silk screen printing.

In contrast to emerging from a culture that was steeped in contemporary advertising and commercials, Crow said that pop art emerged out of classical folklore. Through their art, Warhol and Rosenquist fought to discuss a valid way to live in relation to a less heralded, Great Depression-era past, Crow added. “Pop … often carries this deep folklore steam,” Crow said. “[It] labors to be as hip and never falls short.”
Crow added that folk art collecting had been as widespread as collecting avant-garde works of art. Folk art seeks to find an American set of roots, he said.

Shiner said that Crow’s book is important in that it reveals an underrepresented side of art history by placing pop art “in the middle” of America and of social hierarchy. The movement largely evolved from the Midwest, and artists like Warhol came from working-class and immigrant families.
Most art history theories focus on a broad area of common experiences, Crow said. He added that this view of art history overgeneralizes and doesn’t allow for intermediate steps between culture and art.

“They were a different breed,” he said. “Each was finding a pop solution.”

Nicole Coffineau, an art history graduate student, said that she unexpectedly liked the discussion. Coffineau’s area of study focuses on early Italian photography, so she said that she was surprised to enjoy the pop art discussion. She said that his research was “very thoughtful” and relevant to the modern art world.

“I think that what Tom Crow was talking about clearly displayed attention to methodology,” Coffineau said.