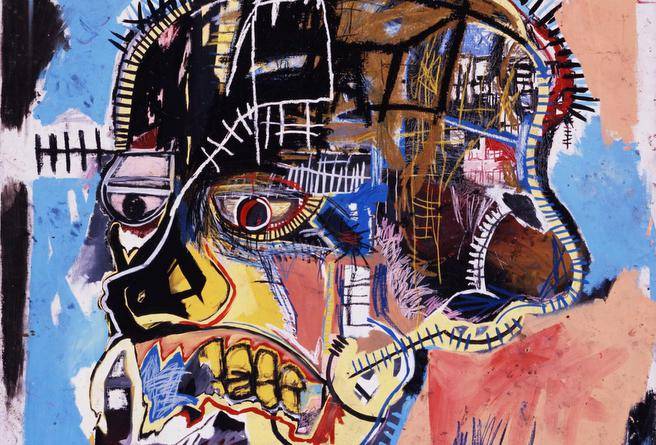 African-American artist Jean-Michel Basquiat (1960-88) died young but left a body of work, a millennium of pieces, that may well endure for millennia yet unborn.

If he himself is not in heaven, his canvases command stratospheric prices that prove him a star in the firmament of modern art, right up there alongside Pablo Picasso and Andy Warhol, the great contemporaries whose fame and wealth and status he coveted.

That Basquiat broke into the Manhattan art market by breaking all its rules is all the more remarkable given that he was black and seeking upward mobility by making art that exploits cartoons, ads and pages torn from Gray’s Anatomy.

Looking at a Basquiat painting is like cruising a city street, one’s eyes absorbing fragments of billboards, fashions, colours, headlines, street signs, all jumbled up.

Jean-Michel Basquiat: Now’s the Time ($35), the catalogue of an exhibit (to May 10) at the Art Gallery of Ontario in Toronto, presents six essayists, including editor Dieter Buchhart, all tussling with the multifarious meanings of Basquiat’s art, which is part anti-capitalist agitprop (but drawn as if by a demented Walt Disney) and part anything-goes collage, emphasizing junk found on a Harlem street or slang overheard in a SoHo cafe.

That the essayists are men underlines the male orientation of the show.

Add Basquiat’s adoration of jazz men and hip-hop dudes, and one begins to see that, for white male critics, acquiring art by the Rorschach-test-dreadlocked painter is a way of purchasing street cred — a reverse snobbery.

Still, nothing detracts from the art, which exudes timeless relevance.

Take, for instance, Irony of a Negro Policeman (1981), which is a jarringly coloured satire on the relatively powerless black cop deputized to further disempower the powerless black poor.

Change Basquiat’s phonetically spelled (on the painting) PLCEMN to PRZDNT, and the painting becomes a black leftist critique of the Barack Obama presidency, the man himself impotent to end police killings of black youth.

Discussing Anthony Clarke (1985), Buchhart observes, “Clarke’s body is … brutally cut through by an orange line that … follows one of the wooden planks of the painting’s ersatz frame.”

Really, the painting is an appropriation of the United States flag, hung vertically. If viewed horizontally, however, Clarke becomes a type of Emmett Till, the black teen lynched in Mississippi in 1955, his head and face grotesquely disfigured in the assault.

I will submit that Basquiat’s many distorted black heads — a combo of Boris Karloff’s Frankenstein monster and the British children’s book character golliwog — recollect the trauma that was Till’s murder, as well as the police beatings and shootings of many other young black men.

Buchhart’s commentary on a Basquiat and Warhol collaboration, Don’t Tread On Me (1985), registers Basquiat’s allusion to an American Revolutionary War flag. But he could note that the red and black of Warhol’s dollar sign and the green of the viper (Basquiat’s contribution) recall the colours — ironically — of Marcus Garvey’s Pan-Africanist flag.

Thus, Afro-Modernists Wilfredo Lam and Romare Bearden are never named, though it is impossible that Basquiat would have ignored their oeuvres.

Similarly, the artists who drafted the weirdo punk-funk album covers (such as those of Parliament-Funkadelic) — namely, Pedro Bell and Bruse Bell — are omitted.

Nor does any essayist bother to think through Basquiat’s probable debt to vaudou (not voodoo) as well as his triple-linguistic heritage.

Christian Campbell’s essay is powerfully poetic and radiates insights. Yet even he doesn’t see that Basquiat’s black heroes are boxed in. The painting that glorifies sprinter Jesse Owens’s triumph at the 1936 Berlin Olympics is steeped in the colours of the Nazi flag — red, black and white — with gold braid.