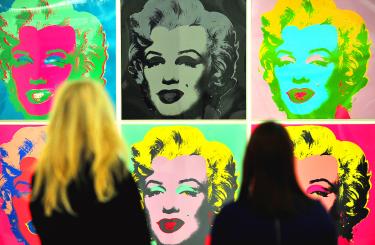 For art lovers, and certainly for the collectors now paying tens of millions of dollars per painting at auction, Pop art and its trademark images — Marilyns, Ben-Day dots, Coca-Cola bottles, lipsticked lips — have become 20th century classicism, as canonical as Cubism and as appealing as candy.

But for many artists working outside the US during Pop’s birth in the early 1960s, the movement presented itself with all the charm of a steamroller.

“In those years,” said Thomas Bayrle, a German painter who was making Mao’s portrait years before Andy Warhol did, “it was like a football match in which one side was always winning and the other side couldn’t even score a single goal.”

Art history moved with unprecedented speed in defining Pop — the great curator Henry Geldzahler said it towed “instant art history” in its wake — and the narrative that unfolded in museums and books has been predominantly American, with a pioneering British adjunct. But a half-century into the movement’s existence, its map is being redrawn with a vengeance. An exhibition opening at the Walker Art Center, International Pop, one of the museum’s most ambitious historical shows in years, makes the case not only that Pop was sprouting in countless homegrown versions around the world but also that the term itself has become too narrow to encompass the revolution in thinking it represented for a generation of artists.

In September, the Tate Modern in London will plow into much of the same underexplored territory with The World Goes Pop. Taken together, the exhibitions are likely to bring the reputations of dozens of overlooked artists — from Japan, South America, Eastern Europe and even the Middle East — into a new kind of spotlight, while showing that many well-known artists who came of age in the early 1960s were Poppier than they might have thought, or appeared.

“This is not about a style, it’s not about America, and it’s not about the claims of where Pop began, which aren’t all that interesting anymore,” said Darsie Alexander, who began working more than five years ago on the Walker exhibition, which she organized with Bartholomew Ryan and the help of international scholars. “When you look back at the things that were being written in the late 1950s and early 1960s, everybody knew something incredibly new was going on in society with mass culture and images, and everybody was trying to find a way to describe it.”

The disconnect between the reputations of American Pop pillars and even many of the critically successful non-American artists working in the same vein has been underscored in recent years by the market’s enshrinement of a handful of artists like Warhol (an auction record of US$105.4 million in 2013) and Roy Lichtenstein (a record US$56.1 million the same year).

For the Walker, it created a curious logistical situation. Some works by American artists were so valuable they carried enormous insurance burdens, while works from countries like Brazil, Argentina, Hungary and Japan had to be “excavated,” as Alexander put it, from storage or artists’ own collections, where they have sat, little seen, for decades.
And that excavation itself, in the name of Pop, was not always a distinction: For some artists in the 1960s, Pop was a dirty word, seen either as an instrument of US power or a politically toothless style that ended up celebrating capitalist excess while pretending to critique it.

“I always protest when I’m accused of being Pop — it’s not my party,” said Antonio Dias, a Brazilian artist whose striking sculpture-painting amalgam in the show, O Meu Retrato (My Portrait), looks like a Claes Oldenburg sculpture on hallucinogens and was made in 1966, two years into the Brazilian military dictatorship that deeply shaped his work.

“When I first saw American Pop,” Dias said in a recent interview, “I said ‘OK, it’s nice, but it says nothing inside it. Its images are like any other images.’”

He agreed to be in the Walker show, he said, mostly because of its ambitions to re-examine what he regards as a pivotal time, “when the way you could use images started to come from totally outside the fine-art world.” (Geldzahler, in a duke-it-out symposium about Pop with other critics at the Museum of Modern Art in 1962, said the movement was borne of “an imagery so pervasive, persistent and compulsive that it had to be noticed.”)

Works that look like Pop — and others that today look little like Pop but that grew out of the same impulses to turn away from abstraction and dive headlong into mass culture — took wildly different forms in different places. The British artist Pauline Boty’s 1960-61 untitled collage in the show, with its gilt paint and sequins amid clipped newspaper pictures, looks defiantly handmade, like an ex-voto, with neither American Pop slickness nor the brashness of more rough-hewed Americans like Robert Rauschenberg. A 1964 painting, Foodscape, by the Icelandic artist Erro, is a multicolored Boschian riot of processed food packages that look as if they are massing for war against Warhol’s deadpan soup cans.

Bayrle, 77, who was little known outside Germany until recently but whose work is now increasingly sought after, was making art in the early 1960s in and around Frankfurt, deeply fascinated by the ways communism and US capitalism looked alike from his vantage point.

“I saw the absurdness in the East, where they had masses of people celebrating in a march and in the West, where they had such huge parking lots, huge malls, huge trash heaps,” he said in a recent telephone interview. “I wasn’t thinking about this ideologically. It was about the visual attraction to me, of the sameness.”

In Japan, where the US occupation lasted until 1952, Ushio Shinohara was engaged in a practice that might have been called punk if the concept had existed then. He was scouring magazines and newspapers for examples of American art and creating serial appropriations from the grainy, context-poor black-and-white images he found, telling his fellow artists: “The first one to imitate will win.”

“I was incredibly nerdy about how I went about following threads,” said Alexander, formerly the Walker’s chief curator and now the director of the Katonah Museum of Art in Westchester County, New York. “I went and found as many early checklists for as many early Pop shows as I could find, and when you look at them, it’s not the neat, categorized world we have come to think of as the Pop world. Everything gets much blurrier and much more interesting.”

Many of those who fell out of the story in the neatening were women, including Americans like Marjorie Strider — who died last year and whose “Triptych II, Beach Girl,” from 1963, is in the exhibition — and Rosalyn Drexler, whose stark movie-frame painting “Sorry About That,” created in 1966 and acquired by the Walker that same year, is also in the show. Drexler, now 88, said she was heartened to be getting fresh attention but that it was coming rather late.

“For so much of a movement to be kind of hidden in this way is pretty depressing to me,” she said, adding: “I was always accepted in the circles of male Pop artists back in the day, but it never occurred to them that I was the only one in the circle not getting paid.” Asked whether she had a lot of her work in her own collection, she laughed: “You could call it my own collection. You could also call it a room.”

Alexander said there were still many such rooms around the world, still filled with work — and histories — that the Walker show only samples. Her hope is that shows like hers and the Tate’s will precipitate deeper digs into those histories and new thinking about the most recognizable art movement of the last 50 years, even at the risk of making the movement and its artists less recognizable.

“If what they are doing is Pop, and let’s pretend it is,” she and Ryan write, “then it is a capacious Pop, one that must remain a shifting definition, unmolded and unresolved.”