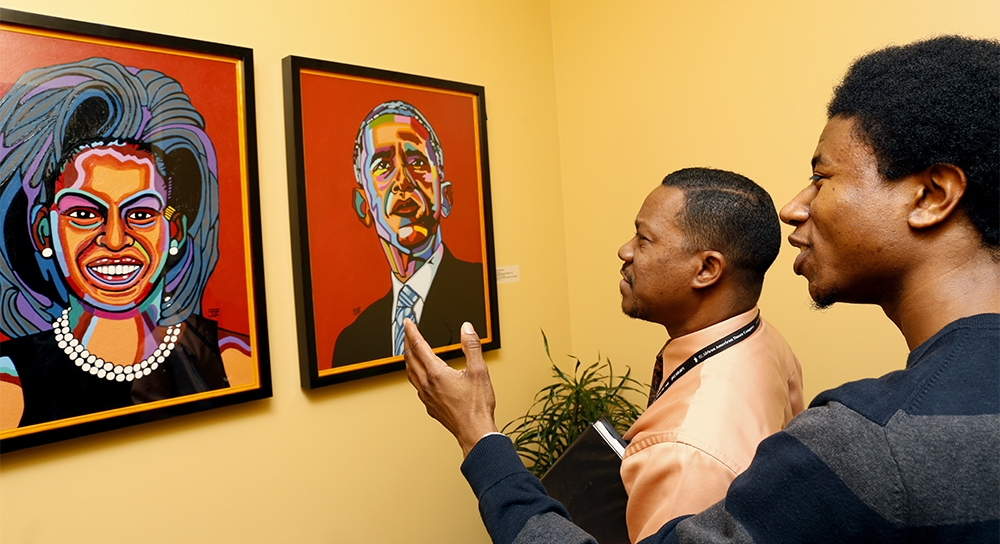 A picture of Adam Herbert, IU’s first black president, hangs on the Neal-Marshall Black Culture Center’s Wall of Firsts, and provides a sense of history for those studying in the building.

This President’s Day, the likeness of another first black president joined Herbert’s portrait in the second-floor corridor lined with photos of historic figures in IU’s black community.

To the left of the floor’s elevator, portraits of Barack and Michelle Obama immediately greet passers-by as they enter the floor.

Bloomington artist Joel Washington’s pop-art pieces struck a chord with a small gathering of faculty and staff in Neal-Marshall’s second-floor foyer for the unveiling of Washington’s latest works, painted with vibrant blues, purples, oranges and reds.

“This day was identified to celebrate the American presidency and to remember all those who served as presidents of the United States,” said Yolanda Treviño, an assistant vice president in the Office of the Vice President for Diversity, Equity and Multicultural Affairs.

“It’s more than fitting that we’re gathered here today at the Neal-Marshall Black Culture Center for Black  History Month to honor the 44th president of the United States.”

Upon the portraits’ initial unveiling, guests gasped and applauded the work for its beauty and volume.

“It’s gorgeous,” said Inger Nemcik, who works at the Neal-Marshall Center. “The more you look at them, the more colors you see.”

Washington, who was given free artistic range for the portraits, drew inspiration from the works of Andy Warhol, Norman Rockwell and the Beatles’ animated film “Yellow Submarine.”

As an 11-year-old interested in animation in the 1960s, Washington said he would watch black and white TV and try to fill in the colors of characters and their clothes in his mind as he watched his favorite shows.

“When I got a color TV, all the ones we looked at, I was right,”  Washington said.

Now Washington said he takes the same approach in his paintings, and sketches them before visualizing the colors that will fill his work.

“When I work on a painting, I don’t pre-pick the colors,” Washington said. “I sketch out the image and then I just look at it and picture what colors would be in it.”

The two portraits were commissioned about a year ago by the Neal-Marshall Center’s former director Stephanie Power-Carter to complement the center’s existing art. Washington said he spent about six months working on the paintings.

He said he sometimes finds it difficult to part with pieces he spends so much time creating.

“The more you work on a piece, the more you get attached to it,” Washington said. “But you also tell yourself, ‘Do you want it here or do you want it where a lot of people can  see it?’”

Other works by Washington have been featured locally in the Indiana Memorial Union, Laughing Planet Cafe and the Village Deli, as well as in the Indiana State Museum and the U.S. Embassy in  Thailand.

Washington also has a pop-art portrait of Maya Angelou on display just down the hall from his Obama portraits in the Neal-Marshall Center.

Washington is working on a 5-by-6-foot piece based on Obama’s inauguration. He said his most recent Obama portrait stands out because of its unveiling on  President’s Day.