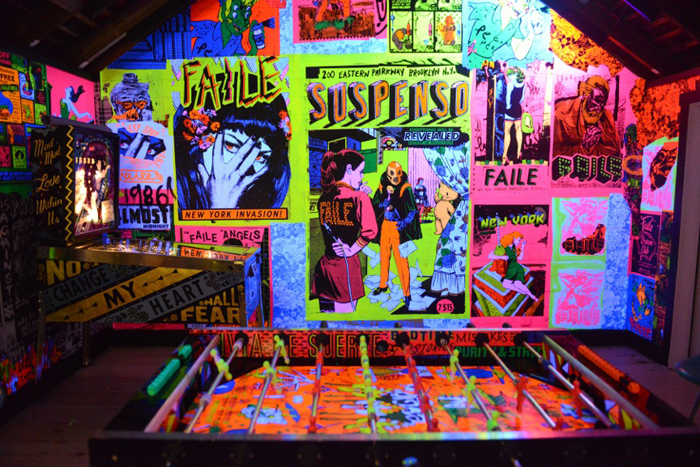 Just in time for the summer, artist collaboration FAILE installed their pop-art arcade show, Deluxx Fluxx, at The Surf Lodge in Montauk. Walls of vibrant graphics reflect FAILE’s signature juxtaposition of repurposed Americana, including quilts and indigenous symbols, with pulp, sci-fi, and comic book imagery. Their work consistently highlights the inherent contradictions between modern life and the sacred.

Formed in the early 2000s, FAILE is comprised of two old friends from Arizona, Patrick McNeil and Patrick Miller. An anagram of “A Life,” FAILE grew from the burgeoning street art scene in NYC and by 2006 were showing their work in UK galleries alongside Shepard Fairey and Banksy, among others. Now, they’re taking over The Surf Lodge’s small, waterfront gallery with digital graffiti collages, pinball machines, and video games enclosed in walls of multicolored Pop art graphics.

In 2010, FAILE teamed up with fellow artist, BAST, to create Deluxx Fluxx. It originally exhibited in London and then again that same year at 158 Allen Street on the Lower East Side. A milieu of wheatpasted neon imagery, it harks back to their roots in street art and punk subculture. The walls are a tableau of saturated pinks, greens, and reds plastered with posters that resemble the papered streets of the Lower East Side in the 90s: handwritten Chinese symbols alongside broken English advertisments: “Help you look your fortune hundred percent true trust me years job I’m speak English and teach peoples look the fortune”; or old adult entertainment ads overlaid with comic book pages and typography alongside texts like “Nuthing is sacred.”

With Deluxx Fluxx, FAILE sought to recreate the anti-establishment atmosphere of their humble beginnings, while also providing visitors with an interactive experience. “In a way it was about trying to grow that language of what we were doing on the street—making something pop up that was unexpected,” FAILE’s Patrick McNeil tells The Creators Project. There have been at least six iterations of this show and each time it evolves. In the London and LES shows, for instance, the arcade games were more visual—there was no win or lose, no objective. According to McNeil, they realized that if they wanted people to hang out there and treat the installation more like an environment for leisure rather than art-viewing, they needed to create more objective-based games.

Thus in their retrospective at the Brooklyn Museum in 2015, Savage/Sacred Young Minds, they created more challenging games, which have transitioned to the show at The Surf Lodge. The current iteration of Deluxx Fluxx is smaller, but even more interactive, boasting two pinball machines, a foosball table, and two arcade games, all designed by FAILE and BAST. According to Miller, their concepts vary. One game, repurposed from their Miami pop-up Exhibition, is called Surfin’ Safari. It pits the FAILE surf horse against the BAST surfing banana, scoring points by bouncing on trash that’s accumulated in the ocean. Another game from their Brooklyn Museum retrospective is called, Tunnel Vision Tag, and features “the FAILE dog running through the subways trying to escape BAST Ghosts while tagging enough spots to earn a MetroCard for escape via a subway car.”

Miller revealed that they have always wanted to create Deluxx Fluxx in a hotel. “It’s something we experienced traveling a lot as kids in the 80s and 90s,” he explains, “—always finding those game rooms filled with a weird mix of characters being fulfilled by a certain escapism. Our hope as always with the arcade is to create an environment where people can have fun and interact with the art while a subversive undertone slowly reveals itself. There’s a certain sense of nostalgia and bringing that experience forward through the lens of our art that makes it meaningful for us to share.”

Deluxx Fluxx at The Surf Lodge carries out FAILE’s vision of weird in the middle of a modern, whitewashed, waterfront resort. A juxtaposition that is as much a part of their art as the arcade itself.

Deluxx Fluxx runs at The Surf Lodge in Montauk through June 16th. Also on display through October 1st are the FAILE flags and Enjoy Your Trip stairway installation.