Home Scoop Pelé: ‘Muhammad Ali Would Tease Me and Say He Was More Famous Than Me’ 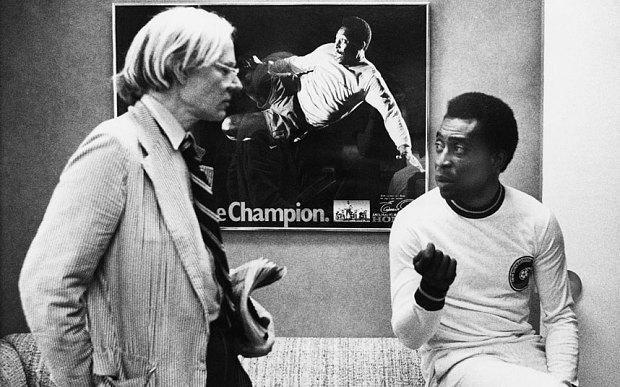 This was taken before Andy Warhol featured me in his Athletes series. He liked the picture behind me but wanted to do something different. I was used to being in action pictures, but he told me, ‘I am going to make something that involves the ball, but not in action.’ I didn’t understand it well, but it was a beautiful idea. He was well-known in the United States at this time, but not in South America. I knew of him because I was playing for the New York Cosmos – I am wearing their shirt in this picture – but in Brazil only people from the arts would have known of him. He was a little shy. I didn’t have many opportunities to be with him, but the three or four times I saw him other than sitting for the portrait, we went to Studio 54. It was the big boom era of New York. We would have a drink and talk but he was always very low key. Warhol said that the sports stars of that time were like the movie stars of yesterday, and I agree. I always say the biggest family in the world is the family of football. You don’t need to speak any language – in Africa, Asia and Europe, we all understand it.

Muhammad Ali was also featured in Warhol’s series. He was a completely different character – more fun, making jokes all the time. We used to get together for dinner and he would tease me, saying he was more famous than me. Football has given me the opportunity to meet many great people. I was with Nelson Mandela in Africa once, and I have met five popes too.

I am 75 in September. The past month I’ve been to China, Australia, the USA, South America and the UK. I travel more now than when I was playing – it’s unbelievable. You know why? When I was a player, the coach or director of the team would make sure the team would rest, to prepare for the game next Saturday. But now I don’t have an excuse.

Football has changed a lot since I was playing – the money in the game, the publicity – but the capacity for good players hasn’t changed. If you are good now, you would have been good then. Today the youngsters are much more prepared for it because they have the information and the agents, so it’s easier for them. Before, we didn’t have this facility or support, but it’s the same as any good musician or singer. If he’s good, he’ll always be good. Frank Sinatra was fantastic, and if he sang now he would still be fantastic.