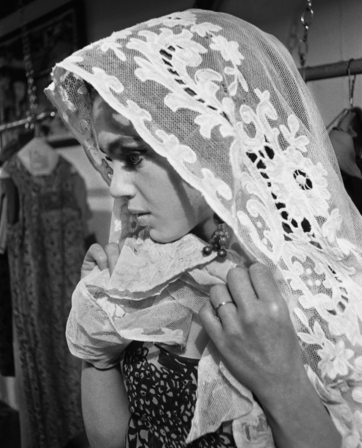 In early spring 1966, the photographer Larry Fink agreed to take a series of pictures for a literary magazine called East Side Review, edited by a man-about-town named Shepard Sherbell. “The story was about Andy,” says Sherbell. “In 1966, everything was about Andy.”

Over the course of several days, Fink shot the group — Warhol and Ingrid Superstar, Lou Reed and John Cale, Edie Sedgwick and Gerard Malanga (Warhol’s collaborator and right-hand man) — mostly on the Lower East Side. They were styled (Sedgwick in a lace scarf and polka-dot dress, Ingrid Superstar in heavy earrings and a gauzy white head scarf) by a woman named Khadejha McCall, a friend of Fink’s who sold African fabric on St. Marks Place. Soon after, the East Side Review shuttered when Sherbell ran out of money, before the shoot was ever published.

“It was a larky shoot,” says Fink of the photos. “Spontaneous.” One image depicts Warhol, Malanga, and Ingrid Superstar posing solemnly alongside a butcher soaked in blood, with Malanga’s hand resting on a heap of disassembled cattle. “We bumped into the meat guy and asked if we could shoot — he said, ‘Shit, yeah, bring them in. Fuck it — let’s eat some steak,’ ” Fink remembers. Another shot — in which Malanga and Warhol stand coolly behind a group of tussling schoolyard children — was more conceptual. “In a way,” says Fink, “these guys represented for me not avant-garde but really arrière-garde. They were far behind the black revolution. So in the schoolyard, I thought I’d have the kids overthrow them. I told Andy and Gerard to walk around in fashion-y poses, and I yelled for the children to attack them. If there had been 150,000 kids, it would have been sort of like Battleship Potemkin, but there wasn’t — there were only 15. So my grand scheme of revolution was miniaturized. But still: I was pulling a fast one on them, in a way. And Andy never forgot me after that.”

In the 50 intervening years, Fink never realized that the photos hadn’t been released. “I was high all the time back then,” he says. “And I wasn’t a careerist. So I didn’t think I needed to get them published. Then this year they turn up. And everybody goes: ‘Well, look at this shit.’ ”

The series will be published by Damiani, winter 2017.