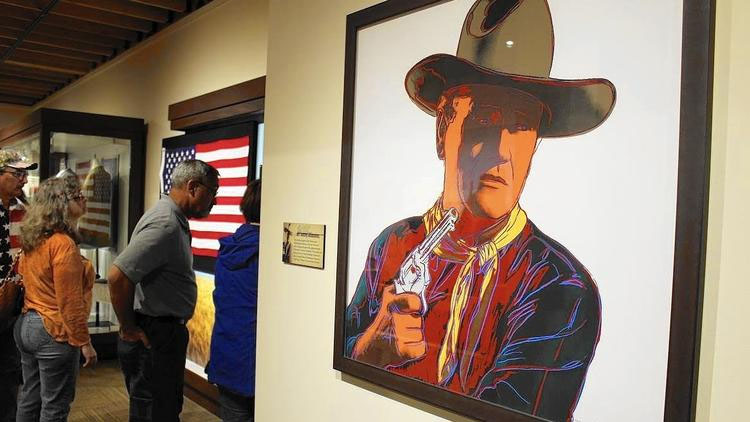 It’s an unexceptional small-town watering hole, the Pheasant Run Pub & Grill, except for a couple of things.

In one corner, two bar stools — and only those two — have red covers.

“Clint Eastwood and Meryl Streep sat there,” said Tonya Fier, who has worked in the bar and lived in Winterset long enough to know some local history. “It was the ‘Blue Note’ in the movie.”

“The movie” was “The Bridges of Madison County.” Winterset is the Madison County seat (complete with the appropriate courthouse and square), and much of “the movie” was filmed in 1994 around the county’s six bridges and in the Northside Cafe (“est. 1876”) on the square and in the Pheasant Run/Blue Note.

The other exceptional thing is the pub’s address: 103 S. John Wayne Drive.

John Wayne was born in Winterset in 1907. Fortunately for the town, by the time the actor left (as a toddler) for California and got himself famous, his name was no longer Marion Robert Morrison, which would’ve been more problematic for the sign-maker.

His birthplace house, a humble, one-bedroom structure, had been a humble museum since 1982, three years after the actor’s death from stomach cancer. People came from all over the world, even if there wasn’t much in there — a few trinkets, letters and family photos, a hat he wore in a movie, a John Wayne clock, that kind of thing, plus a gift shop next door. The museum’s lone real treasure: the eye patch Rooster Cogburn wore to Oscar glory in “True Grit.”

“It was at best, in days gone by, a cool roadside attraction,” Brian Downes said of the little house. “John Wayne’s home wouldn’t have had little light switches with his face on them in the house. It was nothing like a real museum.”

On Memorial Day weekend, the new John Wayne Birthplace & Museum, with Downes as executive director, opened to the world. It is very much like a real museum, with the restored house steps away. Swarms swarmed for the opening, including a grandfather who grew up in East Berlin watching Wayne films (“I was a fan of John Wayne. ‘Rio Bravo,’ ‘Rio Lobo'”) and a young woman from outside Paris who said she learned her English by watching American movies, Wayne’s in particular.

The new museum is 6,100 square feet, much of it gallery space with artifacts, artwork and one of his last cars, a 1972 Pontiac Grand Safari station wagon with an interior customized to accommodate a 6-foot-4 man who no longer was the slim “Singin’ Sandy” of his B-movie youth.

That wagon, of course, wasn’t in the birthplace house. Its one bedroom barely had room for the one bed. (“Original bed?” a visitor asked. “None of it is,” conceded a guide, Kathi Kuhl. “It’d be nice to be able to say that’s the bed.”)

The Cogburn eye patch made the short journey to the new museum, and some of the letters. The impact of the fresh artifacts depends largely on how the viewer relates to each of them: a suit the actor wore in “Big Jim McLain,” pants he wore as “Hondo”), a uniform from “The Green Berets,” a shirt from “Hatari!” Other things, many of them cool.

(Author note: My all-time favorite John Wayne picture is “The Cowboys.” When director Mark Rydell made it in 1972, it was as if he knew this would be his one shot at doing a “John Wayne movie.” It’s full of Waynery — the walk, references to other movies, notably “Red River” — and the classic toughness and tenderness are both there big-time. Even the musical score, by John Williams, is pure cowboy romanticism. The saddle Wil Andersen rode in the movie is in a showcase in this museum. I stared at it a very long time.)

It’s not a huge museum, and while it’s handsome and satisfying, it’s not full of kid-friendly interactivity and endless film clips. A life-size John Wayne statue, in a Monument Valley diorama, would be an audio-animatronic storyteller if this were a presidential museum; here, it’s a silent photo-op. There is a small theater with seats liberated from Hollywood’s Grauman’s Chinese Theatre that presents a nice documentary, and knowledgeable guides provide context and patter. But this museum is largely a quiet pleasure, and any resonance — as with the response to that saddle — would be a personal one.

As is, frankly, one’s take on John Wayne.

“He was a very bright guy, very curious — and much more tolerant than people give him credit for,” said Downes, who met Wayne and over the years befriended many of his co-stars, including Maureen O’Hara and Harry Carey Jr.

“He was a man of his times, absolutely,” Downes said. “He absolutely was. No doubt about it. He said so in print, and he didn’t back down from it. It’s how men of his era thought — certainly not him alone.”

And there’s his lack of military service …

“No question about it,” Downes said, adding his take: “I didn’t serve. I wish I had. I think that’s the same case. I could’ve gone to Vietnam. He could’ve gone to World War II. There really was nothing stopping him from serving in some capacity. And I think he regretted that for the rest of his life — as I do.”

So we’re left with the man’s body of work, which is remarkable but doesn’t explain John Wayne’s hold on so many people even now, 36 years after his passing and 39 after his last movie, “The Shootist.”

Most of our uncles and grandfathers and dads don’t have brand-new birthplace museums. John Wayne does, and so does Winterset, Iowa.

Howard Harrell is a longtime Winterset city councilman. He’s lived here all of his life. He has never seen “Bridges of Madison County.” He was in the Pheasant Run Pub & Grill to acquire a morning red-colored well-seasoned cocktail, to go, for a friend.

“People come in here and look at those things, and to the people living here, it’s no big deal,” said Harrell, who hadn’t been in the birthplace house in decades. “People who live in St. Louis probably don’t see the arch.”

He’s seen John Wayne movies. He’s been inside the John Wayne Birthplace & Museum. He likes it a lot.

Young cowpoke Charlie Schwartz to trail cook Jebediah Nightlinger in “The Cowboys”: “Is that true?”