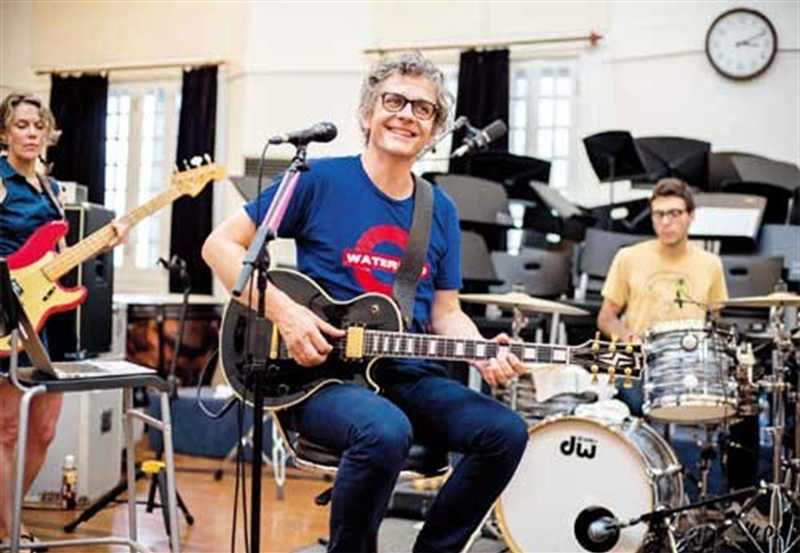 COKE bottles, dollar signs and Marilyn Monroe… Everybody knows Andy Warhol from the subjects of his pop culture-inspired paintings. But the celebrated American artist also produced dozens of films during his prolific career.

Viewers in Shanghai caught a glimpse of Warhol’s motion-picture portrait series “Screen Tests” on Wednesday night during the Music in the Summer Air concert series. The works were presented as part of the traveling multimedia show “13 Most Beautiful” by Dean & Britta, a duo consisting of guitarist Dean Wareham and bassist Britta Phillips.

Wareham and Phillips were commissioned by the Andy Warhol Museum to create accompaniment for 13 of the short films in 2008. Their songs were also later added to an album bearing the name of the show, which the pair has performed at venues around the world.

“We haven’t done the show for a year, but it comes back quickly in rehearsals,” says Wareham. “It can actually be very emotional for us to see the faces again after the long break.”

The black-and-white silent films in the series consist of unbroken takes of celebrities, friends, regulars at Warhol’s Factory art space and anyone the artist thought had “star potential.” Many were filmed at slow speeds to accentuate the movements and expressions of their subjects. Altogether, about 500 such films survive today.

Much of Warhol’s work explores the relationship between artistic expression, celebrity culture and advertisement as they existed in the 1960s and 70s. But despite his obsession with cultural icons and attractive stars, Warhol celebrated the inner beauty of ordinary individuals. As he once put it: “If everyone isn’t beautiful, then no one is.”

The music provided by Wareham and Phillips is meant to capture the unique inner lives of Warhol’s subjects.

“The music has to make the people live in the room, rather than just somebody captured in a movie long time ago,” says Phillips.

To achieve this, the duo researched the subjects they selected for the show. Most of the songs were created by Wareham and Philips themselves, though they also selected some ready songs for particular figures, such as Bob Dylan’s “I Will Keep It With Mine” for Velvet Underground frontwoman Nico and “I’m Not a Young Man Anymore” for Lou Reed.

“It may be an emotional experience for someone to look at the faces on screen … together with the music. Edie Sedgwick looks so young and beautiful in the video, but we all know that she was dead before long,” says Wareham.

The pair says that after one performance attended by Sedgwick’s husband, the widower said the show made him feel like his wife was alive and in his presence again.

Q: How did the program “13 Most Beautiful” start?

Phillips: It started in 2008. The Andy Warhol Museum in Pittsburg contacted Dean and asked whether we would like to create such a program. The museum have all those 500 films of Warhol’s “Screen Tests,” which are little known. Everybody knows Warhol’s paintings, but not necessarily his films. The museum thought that it might be a nice way to help people see the “Screen Tests” — inviting musicians to write music for the videos and creating a multimedia show.

At first, we thought that it would only be a three-time show. Now, we have done it for eight years.

Wareham: Of course, we cannot do 500. Thirteen is the number of films that Warhol used to put on show. He had compilations like “13 Most Beautiful Women” and “13 Most Beautiful Boys.” So, we decided to pick 13, and they should not just be celebrities, but people who were really a part of Warhol’s Factory studio. They were working or living with Warhol every day, such as his boyfriend, assistant, friends and art supporters. We also tried balancing the number of men and women.

since not all of them are digital.

Q: Among the 13 people you selected, were there any that particularly attracted you?

Phillips: My favorite would be Jane Holzer. She was a very popular model, credited as “girl of the year” in 1964 … She is very interesting to watch. She was brushing her teeth — she’s not pleasant, but quite sexy.

Q: What do you make of the techniques used in these films, such as the use of black-and-white film and slow-speed exposures?

Wareham: Yes, by slowing the film down, Warhol stretched a three-minute film into four minutes. In that case, everything in the video was magnified, especially the expressions of the person in the film. You will notice a lot more emotions going on.

Warhol did not know how to edit a film, so he didn’t. He just let the machine run, and was interested to see what happened to the people in front of the camera. It was like a psychological test. They sat there and projected things such as “I am strong” or “I am tough.” But in front of the camera, most people could only hold it for two minutes, and then something else comes in. Some people started by laughing yet ended up crying. You can see the self-consciousness in it.

Q: What was the process of you creating music for each particular person in the film?

Phillips: Some were easy; some were difficult. Sometimes, we just sat together and started playing until ideas came up. Sometimes, we had an idea first and then followed it. But really, we had no idea whether the music worked until putting it together with the pictures. Good music itself does not necessarily make the film better. It has to fit the figure and mood in the film, and possibly help make it more intense or emotional. It was really a process of trial and errors.

To make the music fit, we did a lot of research on particular persons. Take Fred Herko for example. He killed himself just two months after being captured in the film. He was an amazing dancer, and chose to die by dancing out of the window. It was kind of a spectacular dance, dark but beautiful. In the video, he was smoking, with a dark atmosphere around, just like somebody who would kill himself. We wrote an instrumental piece without lyrics for him. It is a dark piece, but not necessarily sad.

Wareham: Yes, he is still the most famous and popular American painter ever. At one time, he was a big threat to some serious painters. Warhol’s painting of dollar signs and coke bottles made them very angry. He painted what everybody sees, just framed it in a different way.