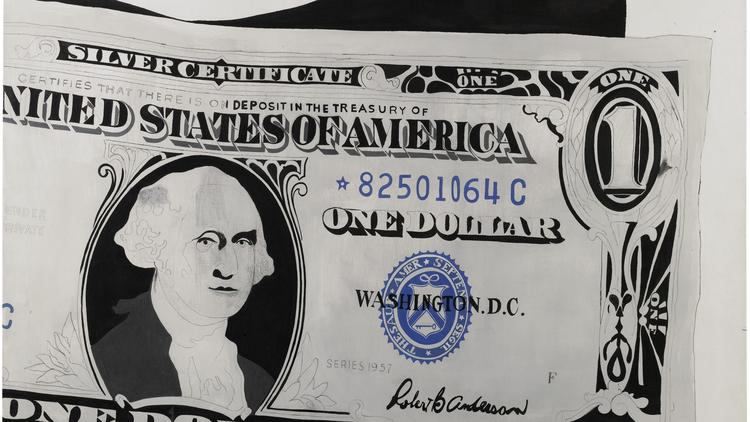 The almighty dollar is the lingua franca of the international art market. But the dollar was also a favorite subject of Andy Warhol and other notable contemporary artists. An upcoming sale from a private collection will seek to wed art and commerce on the glittery altar of the greenback.

A collection of 21 pieces of contemporary art, all depicting the U.S. dollar in some way, is expected to fetch as much as $93 million when it heads to a Sotheby’s auction in London on July 1.

The pieces, which come from a single private European collection, include a number of money-themed Warhol works including the artist’s 1962 “One Dollar Bill (Silver Certificate),” which could sell for as much as $30 million.

Sotheby’s said the collection also includes works by Keith Haring, Joseph Beuys and the British art team Tim Noble and Sue Webster. The 21 works are estimated to bring in between $62.8 million and $92.6 million.

A spokesman for the auction house said that art from the collection will go on display at Sotheby’s in Los Angeles on Thursday for one day. He was unable to reveal the identity of the owner of the art.

Warhol’s “One Dollar Bill (Silver Certificate)” depicts a dollar bill note and was created by hand by the American pop artist. Other Warhol works to be sold include “Front and Back Dollar Bills,” a silkscreen depicting multiple dollar bills, and his 1981 works “Dollar Sign” and “Dollar Signs.”

Noble and Webster’s “$.” a sculpture of a dollar sign, will be part of the sale, as well as an untitled Haring piece from 1982. The auction will also include pieces by Chinese artists Wang Jin and Zheng Liu.

The July 1 auction in London will offer an array of contemporary art, including self-portraits by Francis Bacon and works by Gerhard Richter.