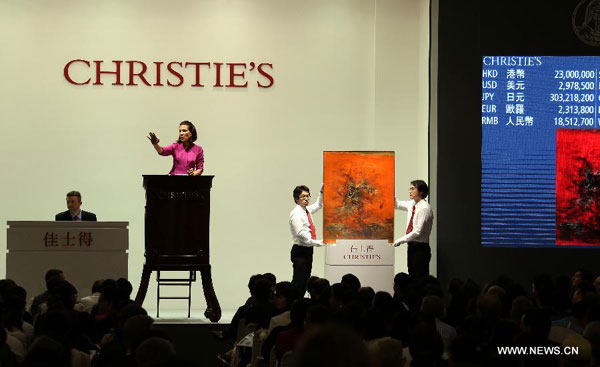 Works by modern masters Pablo Picasso, Marc Chagall, Andy Warhol and Salvador Dali, will be offered up at an auction by Christie’s in Shanghai on April 25.

Organizers say over 80 items from both Chinese and Western artists will be going under the hammer at the auction.

Among the works showcased at a preview gallery open to the public was Pablo Picasso’s “Tête d’homme”, and Salvador Dali’s melting clock sculpture, “Dance of Time I”.

“Our special night auction will continue with our 20th century and contemporary art section. It’s a platform for both eastern and Western art pieces. We will have the works of many great western artists, such as Picasso, Chagall, Andy Warhol, etc. During this session we will also showcase the works of some of our younger Chinese artists, which will include many artists from the post-70’s and post 80’s generations.”

Works by modern Chinese artists Hao Liang and Jia Aili will also be auctioned off this evening.

The London-based auctioneer sold tens of millions of dollars worth of art, jewellery, watches and wine at its first auction in China over the past two years.