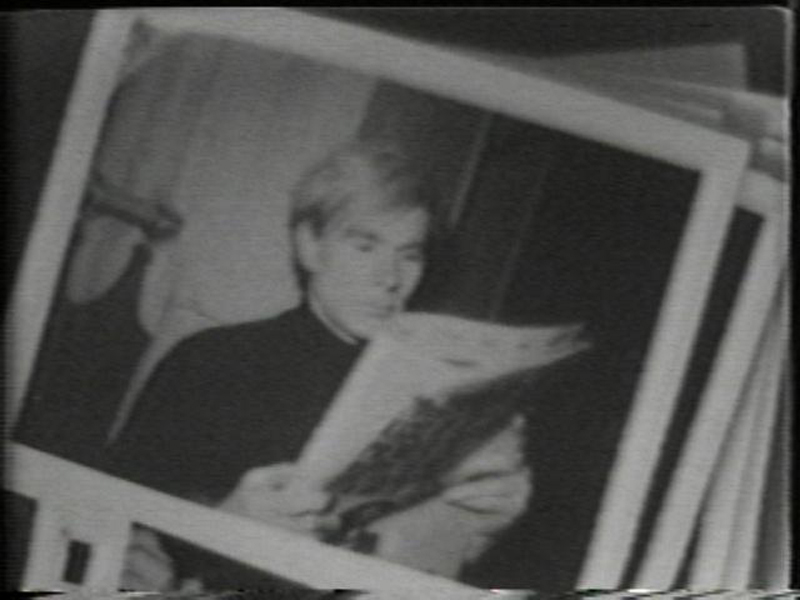 THE DAILY PIC (#1588): In the early 1970s, a young man named Michael Netter started working as Andy Warhol’s in-house videographer. He helped extend the artist’s record-everything ethos from Polaroids and audiocassettes to a pile of videotapes – in wildly low-res, as per my image – which at some point got dubbed the Factory Diaries. (Even though, strictly speaking, Warhol’s Factory stopped existing in 1968, when he moved it to Union Square and renamed it The Office – a rechristening that most people have ignored). Judging from the sample of tapes on view now in a side-room of Netter’s solo show at ACA Galleries in New York, he was just the man for the job.

In videos like the famous one of Warhol and David Bowie’s first encounter, or of Factory superstar Brigid Berlin talking through a pile of Polaroids she’d taken of Andy, Netter achieves a foursquare, just-the-facts-ma’am vision that’s perfectly in sync with Warhol’s documentary impulse. The images on the Warhol tapes shot by Netter accumulate in drifts and floes of equal-opportunity observation.

Those videotapes are just one aspect of Netter’s show; most of it is taken up with the paintings he’s been doing, almost in secret and for his own pleasure, over several decades of post-Warhol work as a business consultant.

As Netter is the first to admit, there are some obviously Warholian echoes in them: Some of their motifs derive from popular advertising while Netter’s technique, which often involves spray-painting through stencils, isn’t a million miles from silkscreen printing. But those echoes are, I think, fairly superficial. In the best of the paintings, like the one reproduced below, I detect a more purely Netterian eye that links up to the skills he brought to the Warhol videotapes. As he lays stenciled image on top of stenciled image, there’s a sense of almost-random accumulation – of an open-armed embrace of what comes his way in the world – that is the same sense you get from his videography. The painting below was actually made on a piece of found particleboard, and its central house-like shape was there already as a stain before Netter came along. Netter’s stencils also register as random incident, as though he’d found a stack of them cast-off by some ancient sign painter and then almost haphazardly allowed their images to transfer to his work.

Stencils, after all, are one of the most common elements in the visual palimpsest of urban life. Netter makes it feel as though he’s simply opened himself to them as they’ve floated by his eyes – kind of the way Warhol opened himself to Campbell’s soup and movie stars. (Video artwork ©2016 The Andy Warhol Museum, Pittsburgh, PA, a museum of Carnegie Institute. All rights reserved)