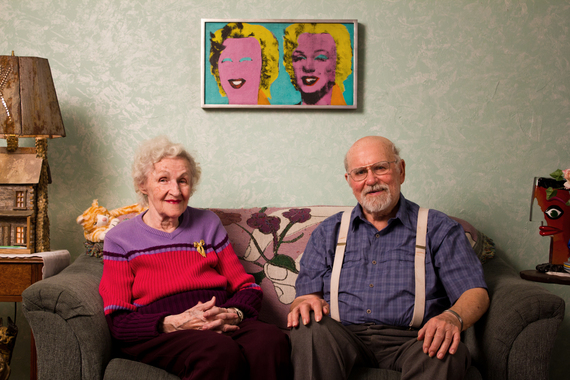 A few years ago, in one of life’s truly happy accidents, I was introduced to a descendant of one of the world’s great artists at an opening in Washington, D.C. The next thing I knew I was in Europe sitting around a conference table with other members of the family who shared the famous name. It was an extraordinary visit, and one of the most interesting days of my life.

As someone who writes about art (or tries to, at least), I was transfixed listening to these very normal people talk about their very abnormal ancestry and its effect on their family members. I got to thinking about how very important these people are, how wonderful it is that they are among us, and how much they can teach us.

My new friends gently rebuffed my requests to go public with this extraordinary experience and though I haven’t given up on wanting to help them tell their story, I don’t think it’s going to happen. For they know the price of being “out there” — from misconceptions about family fortune to surrender of privacy and the ability to forge their own way — and they just aren’t up for it. And while it’s a shame, I can’t say that I blame them. At all.

Last week when I read that a relative of the late Andy Warhol was venturing to make Uncle Andy, a documentary about him “from the family’s perspective,” my imagination — and because this is something I’ve spent a lot of time time thinking about, my heart — was immediately captured.

So I reached out, of course, and found myself in a fantastic conversation with one Abby Warhola: 30-year-old granddaughter of Paul, oldest of the three Warhola brothers who passed away in January 2014. Abby lives in Pittsburgh, where most of the Warhola clan can still be found, with her partner Jesse and their 7-year-old daughter, Veva. And this is what she had to say about her project and her family:

CJ: Hi Abby! Where are you now and what are you doing?

AW: Hello! I’m at my grandmother’s house, Anne Warhola, Andy’s sister in law, who will be 91 this May. I stay with her three nights a week to help out. She is one of my favorites and I love interviewing her. She pulls no punches when talking about Uncle Andy and jokingly refers to him as being a pain in the ass…

CJ: You sure she’s joking?

AW: (laughs) I guess it depends on her mood. They had a typical brother-sister relationship.

CJ: What’s it like being a Warhola, anyway? When did you first become aware of your interesting Uncle Andy?

AW: Well there’s never a dull or quiet moment when one of us are in the room! We are a very close-knit family who laughs a lot. I think as a whole we are a really eccentric and creative bunch. I don’t know if I was ever unaware, but once the Andy Warhol Museum opened in Pittsburgh, my life really changed. I had the chance to meet some of his famous friends, including Dennis Hopper, Lou Reed and Pee Wee Herman. It was pretty exciting.

CJ: The news of your film project has really caught fire in the last few days. Are you surprised by the reaction?

AW: For us, it has been a very surreal experience. It really confirms just how popular Andy has become. Within a week, the story was all over the world. I guess nothing is surprising when you’re talking about people being interested in Andy Warhol!

CJ: What do you do in real life? Is this your first film project?

AW: I do a little bit of everything. Primarily, I’m a photographer, but I’m also a designer and a letterpress printer. While I do shoot video, 16mm and super-8 film on various smaller projects, this is my first feature-length film.

CJ: So you are the one getting the attention at the moment, but this is actually a collaboration between you and your partner, Jesse, right? Tell us a little about him.

AW: Yes, Jesse and I are working on this together. He is a visual artist with a background in film. Jesse was really the one to push the idea of turning my family’s story into a documentary. I’m a little too close to it all, and honestly never thought it was something to pursue. It wasn’t until we started capturing these interviews that I realized how interesting my family really is.

CJ: What made you and Jesse decide that now was the time? What does the broader Warhola family think of it?

AW: We’ve been filming for several years, but it wasn’t until my grandfather passed away in 2014 that we decided to push the project into a feature-length film. When his footage became finite, we felt the urgency to preserve it and create something bigger to honor both my grandfather and Uncle Andy’s legacies. My family is very supportive of the project. They are excited that someone within the family can finally share their unique story.

CJ: Is the museum or the foundation involved in any way?

AW: The Andy Warhol Museum has been very supportive! We have done some interviews and hope to work with them further. Since they are non-profit, they are unable to provide any financial support to commercial projects. The foundation has never had a relationship with the Paul Warhola family. Andy’s other brother, John Warhola, was involved with the foundation and Paul was not included in that relationship. Still, it is our understanding that the foundation was created to provide grants for contemporary artists, and since this film is about Warhol, it doesn’t fall within their guidelines of support anyway.

CJ: Tell me a bit about John and Paul. What did they think of their brother’s fame?

AW: Well, I can only speak for my grandfather, Paul. I didn’t really have a relationship with Uncle John. My grandfather might have been the proudest big brother in history. He absolutely loved telling Andy stories and actually saved every newspaper and magazine clipping that he saw.

CJ: My impression has always been that there was a real distance between Andy and his family. Is this correct?

AW: It was never that Andy was distant to his family, he just kept his two worlds very far apart. The family visited him in N.Y.C. about once a month for nearly three decades. Whenever the family would visit, he was very strict about them not visiting the Factory, or letting them see his more adult “colorful” films. He was protective of them and enjoyed their presence in the privacy of his home.

AW: I don’t think the incredible numbers his paintings go for now fully compute with us. The family is very proud of what Uncle Andy has achieved, but at this point his global stardom has stretched beyond anything we could have ever imagined. It’s wild to think that just one of those paintings could have changed my entire family’s life for good…

CJ: You’ve launched a Kickstarter campaign to fund the film. Talk about that and why the decision to crowdfund?

AW: There’s a few things that appealed to us about Kickstarter. Raising funds this way empowers us to be completely independent and tell the story the way we know it. Another great aspect is the exposure you get from launching a campaign. We can say that the coverage on the project has truly blown us away. If anything, Kickstarter is a wonderful platform for getting the word out and discovering the people who are willing to support the project.

CJ: There is quite a bit out there at this point about Andy and his legacy — books, films, what have you — do you have any particular favorites?

AW: I actually haven’t read any books about him. I like to look at his picture books though. For instance I think Shoes, Shoes, Shoes is really just great. I loved Basquiat. David Bowie was my favorite Andy ever.

CJ: That movie was really great, wasn’t it? Some say that they never saw Andy happier than when Basquiat was in his life. And, yes, Bowie nailed it! And you should read Holy Terror by Bob Colacello. I’ll send you a copy!

AW: It really was a great! And please do send me a copy! I’ve heard from my uncle that it is a really great read.

CJ: Speaking of Colacello, are you working with anyone from the Factory days on the film or is it strictly a family affair?

AW: So far, Billy Name and Gerard Malanga have graciously contributed their photography, most of which is from the Factory days. Great iconic Andy images. We intended to speak with them and others who were close enough to Andy to know how he lived outside of the limelight and factory scene. However, we feel that it will be the family’s stories that will reveal a layer to Warhol that has not yet been shared.

CJ: What is there to tell about Andy that hasn’t been told? What kinds of things can we look forward to learning and whom will we see in the film?

AW: Well it’s no secret that Andy was very guarded and trusted few people, and rightfully so, considering the many nefarious characters who were looking to gain something from him. The family was this small circle of people that Andy could trust and rely on for support. When he was shot in 1968, his eldest nephew Paulie took care of him during that time and recalls the way that experience profoundly changed Andy. It is within these stories that you begin to understand what made Warhol such a complicated and fascinating person. Without giving away too much about the film, we can say that the family’s memories touch on everything, from the good, the bad and even a bit of the ugly.

CJ: So when is the Kickstarter deadline and do you feel like you are on track to raise what you need?

AW: The deadline is April 2nd at 6 p.m. eastern time. We currently have over $35k which is an encouraging start, but there still a long road ahead to achieve our goal of $175K.

CJ: I’ve noticed there are some wonderful and probably highly collectable rewards that come with different sponsorship levels as well. Discuss.

AW: Yes! This is the first time that the public has an opportunity to purchase Warhola family art! Much of the Warhola family shares this rare artistic talent. We are offering original silkscreens by Paul Warhola, and his works have been featured in galleries around the world. Since his passing there is only a limited number of these available. My Uncle James, who is known for Garbage Pail Kids, Mad Magazine, numerous Sci-Fi covers and illustrated children’s books, has offered signed copies of his books and even an original watercolor painting. My mother Madalen has contributed her beautiful Pysanky Ostrich Eggs, which she creates in the honor of the Warhola family tradition. My family is very proud of their Rusyn heritage and these eggs are truly one of the highlights.

CJ: Fantastic. Thank you for your time, Abby. This sounds like a very special project and I really wish you and Jesse the best with it. Keep us posted, ok?

AW: Absolutely. Thank you so much! We really appreciate you taking the time to hear about our project!