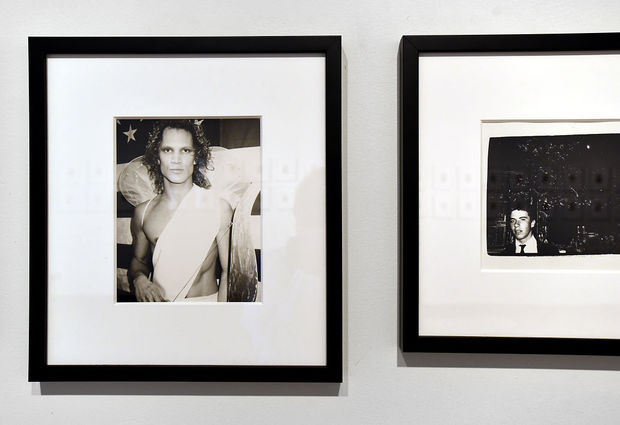 Standing in the middle of the gallery at the Missoula Art Museum, you can see the world as pop art master Andy Warhol saw it.

The museum currently has about 150 photographs by the artist on display, on loan from the Museum of Art at Washington State University. Stephen Glueckert, senior exhibition curator, said the MAM recently loaned the WSU museum one of its pieces, the Chris Larson sculpture “Pause,” and staff there asked if they could reciprocate.

When the MAM staff examined the art available, they decided they wanted to bring an exhibition the WSU museum had on display at the time, a selection of about 100 Polaroid photos and 50 silver gelatin prints made by Warhol throughout the 1970s and 1980s.

“He still has an influence on the art world today, he kind of set a standard for artists in our contemporary time,” Glueckert said.

He said the practice of trading artwork between museums is relatively common, and allows each to display an exhibition they otherwise wouldn’t have been able to bring in. The MAM also displayed some Warhol prints last year.

WSU had been gifted the selection of photos by the Andy Warhol Foundation for the Visual Arts in 2008. Glueckert said the foundation has been very proactive on preserving the artist’s legacy, and likes to see his work on display and traveling around the country.

Another gift of photos went to Montana State University-Billings, where they are frequently on display. In all, the foundation sent more than 28,500 of Warhol’s photos to art institutions and museums around the United States.

Glueckert said the black-and-white silver gelatin prints represent Warhol in some of his more personal moments, including shots of visitors to his New York studio, The Factory. The photos range from portraits of friends and celebrities, and voyeuristic shots of strangers, to seemingly mundane pictures of city streets and storefronts.

Almost all of the Polaroids are portraits, including celebrities like Wayne Gretzky, Chris Evert and Boy George.

“Warhol was interesting because he was a multifaceted artist who was comfortable with the commercial nature of society,” Glueckert said. “Many of his screenprints were done based off of photos that he took.”

Guidebooks are available in the gallery identifying the subjects of as many of the photos as the Andy Warhol Foundation has been able to gather information on.

Warhol’s collection of photographs will be on display at the Missoula Art Museum through August 15. The museum is open Tuesday through Saturday from 10 a.m. to 5 p.m. Admission is free.