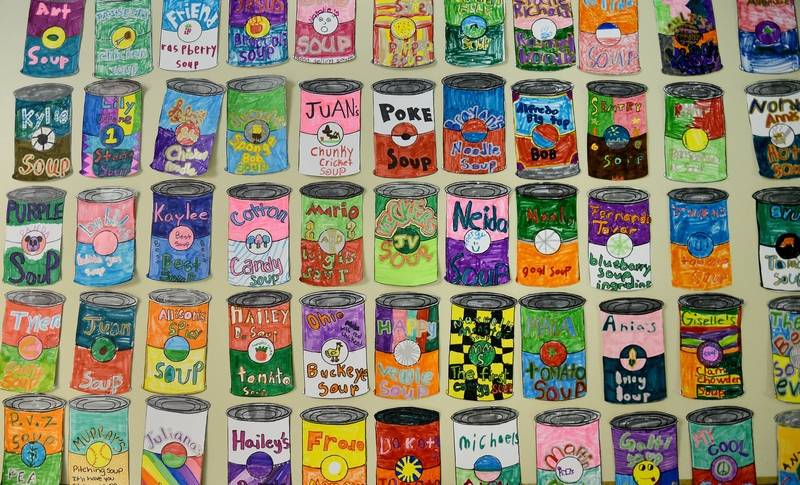 In a school library filled with books and computers, a large Campbell’s soup can painting adorns one wall.

In fact, throughout the room at Martin Elementary School in Lake Villa, there are collages of soup can labels and paintings that pay homage to famous figures including Marilyn Monroe and Donald Duck.

And in the hallways, student artwork includes personalized soup cans, colorful flowers and an homage to pop art featuring their own image.

These exhibits were part of a schoolwide lesson by art teacher Paula Sandberg as the kindergarten through sixth grade students studied Andy Warhol and pop art.

“We are exposing them to these artists. They can look and absorb it at their own level,” Sandberg said. “Now they have this knowledge. When they see works like this, they will know who it is. It is culturally something we need to introduce to our students.”

Sandberg said elementary students like art production, and that’s what they expect to do when they come to art class. They don’t want to hear a lecture. Presenting Warhol through an exhibit was ideal, she said, because his work is fun and represents what was recognizable.

“He was picking people who were popular during that time. He picked Mickey Mouse and Curious George, Marilyn Monroe,” she said.

Creating an exhibit on a specific artist has been the work of Jolene Lee for eight years. The mother of six children and a former middle school art teacher in Skokie District 68, Lee said the idea began after she shared with some moms a trip she made to the Art Institute of Chicago. The other moms said they had never been there, which Lee added meant their children never had been there either.

Her goal was to help highlight the creative arts in school.

“It is very fulfilling to be able to contribute in this way to the education of so many children,” Lee said. “I’m grateful for the experience of collaborating with Paula Sandberg and the Martin staff.”

In previous years, Lee has created exhibits that highlight Claude Monet, Pablo Picasso, Jim Henson and last year, Walt Disney. The exhibit gives students a greater understanding of the artists and, perhaps in the case of Warhol, makes them question the artwork too.

“(My son,) Oliver, who is in second grade, said ‘I can’t believe an artist made art out of soup,'” Lee said.

The library was where students and staff could see the largest display of Warhol work. There, Lee created a large Campbell’s soup can painting that she recalled almost didn’t fit into her car. The display, which has been exhibited since mid-February, also features pieces that Lee said are not Warhol reproductions but her effort to reproduce his style and subjects.

“For the children, it is like taking a trip to an art museum without ever leaving their school,” Lee said. “And, better yet, their own art gets to be a part of the exhibit.”

For the first time, students across all grade levels took an active part in the lesson, Sandberg said. Second through sixth grade students created soup can labels. Their designs, along with flower student art done Warhol-style by the first-graders, were displayed in the hallways.

Students also designed pop art images featuring their own image in computer class, which also were displayed in the hallways.

The library also features a nod to Roy Lichtenstein and his contributions to pop art with three reproductions of his work. Lee said rainbows hanging from the ceiling and hats set atop the bookshelves pay homage to Warhol’s colorful work.

Recognizing one of Warhol’s most iconic images, the Campbell’s soup can, the school organized a canned soup drive as part of the project. Students donated cans of soup, which have been stacked and displayed in the library. Sandberg said the soup will be donated to the Lake Villa Township Food Pantry.

Students also joined a guessing game as part of the exhibit, in which they estimated how many pairs of shoes are in a large, clear bag. Lee said the shoes were chosen because Warhol designed advertisements for shoes early in his career. The shoes will be given away, possibly to students who need them who attend the school or to charity.

Lee has ideas about the artists she plans to feature at Martin in the coming years. She said she hopes next year to highlight some of the artists she is featured in previous years such as Monet. That will give her more time to plan a future exhibit on an artist that she has not featured in the past.

“Someone requested that we do an exhibit on Charles Schultz,” she said.