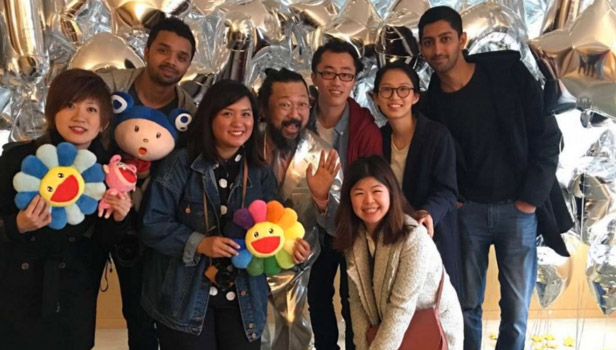 Pop cultural artist Takashi Murakami, dubbed Japan’s “Andy Warhol”, gave his Instagram followers in Hong Kong a surprise treat this morning by inviting some of them to an “InstaMeet” in a hotel suite in Admiralty.

Sporting a silver tracksuit, Murakami posed for selfies and autographs, chatted about art and photography – and in the process rode the coattails of one of the hottest new social media trends.

InstaMeets are events organised by Instagram users so they can get together in such a manner. This was Murakami’s second, after an initial experiment at the Gagosian Gallery in New York in January 2015 drew thousands of fans.

Murakami is known for his creations across a range of media. He often incorporates motifs from traditional and popular Japanese culture. Some of the recurring insignias include flowers that smile, mushrooms and skulls.

The artist, who now has 209,000 Instagram followers, issued the invitation at around 4am on Wednesday morning by posting a picture on his account showing a wall full of silver-coloured helium balloons that spelled out his first name.

“If you are in Hong Kong on [Wednesday morning], meet me from 9am to 10am at The Upper House hotel for another InstaMeet,” ran the accompanying text.

“I use Instagram very often. I enjoy it very much,” Murakami told the South China Morning Post after the event wrapped up. Previously, about 20 people crowded the hotel suite. An estimated 50 people attended in total.

“It is very fun to connect [with my followers like this],” he added.
Fan Jess Barnieh hailed it as a “once in a lifetime experience”.
“It’s amazing,” she said. “It’s an opportunity that many of us who’ve attended this might not have otherwise had.”

The InstaMeet also featured other artists from around Asia and some of Hong Kong’s most popular Instagrammers, including fashion blogger Tina Leung.

Kim Sun, an Instagram user from South Korea who flew here to attend the ongoing Art Basel event, said she had secretly been hoping to meet Murakami.

“I am a big fan,” she said. “This is the first time I have joined an Instameet, and I will join others in the future.”

Art Basel is an annual art fair that will run this year in Hong Kong from tomorrow till Saturday. It also takes place annually in Miami Beach, Florida and at its namesake Basel in Switzerland.

Meanwhile, stylist Declan Chan said it was unusual to get to meet someone of Murakami’s standing in such an intimate environment.

“It’s so great that we have this opportunity to meet the artist in such a cosy environment,” said Chan.

Users from all over the world use InstaMeets as a platform to connect with each other, exchange photography tips and even gain inspiration for future posts.

Barnieh, who moved to Hong Kong from London in 2013, regularly organizes such get-togethers in the city so that like-minded people can explore it and take photographs together.

“It helps us to learn more about photography, and it’s a great way to meet people and be creative ,” she said, adding that Instagram has added to Hong Kong’s fame by promoting it as such a great city to photograph.
Some users “put Hong Kong on their travel list” after seeing the Instagram pics, she said.
The photo-sharing platform now has over 400 million active users worldwide. About 75 per cent of its users are based outside the United States.

“Instagram is the creative canvas for a young and highly engaged community in Hong Kong,” said Eri Mishima, community manager for Instagram in Asia-Pacific.