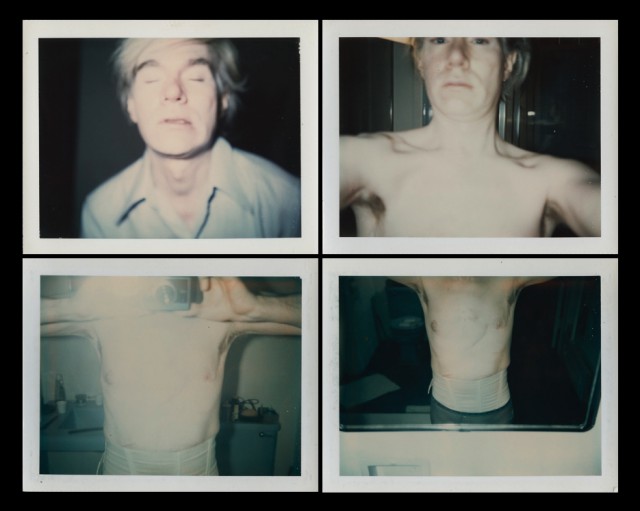 Today is Andy Warhol’s birthday, so I thought I’d celebrate his birth, in 1928, with some new pictures of his (near) death, 40 years later, at the hands of Valerie Solanas.

These four 1969 selfies of the post-shooting artist come from a fat new book of Warhol Polaroids that Taschen is releasing in a few weeks, in collaboration with the Andy Warhol Foundation. I think a gruesome, death-aware birthday shot would have suited and pleased Warhol, who had a morbid side that he mostly hid.

For a little while now, I’ve been working out the details of the ’68 shooting with Seattle surgeon and medical historian John Ryan. We’ve found lots of amazing facts … which we’ll be shouting from the rooftops at some later date. Thanks to Ryan, I’ve pretty much learned which surgical procedure produced each of those Frankenstein scars.

For now, I’ll just say that, given the extent of his wounds, the artist’s survival was yet another example of the uncanny luck of the Warhols. Medically speaking, at least, he was in the right place at the right time – if one can say such a thing about a guy who had only been shot at all because the killer’s preferred target wasn’t home. (©The Andy Warhol Foundation for the Visual Arts, Inc.)