Home Scoop How the Ultimate Pop Icon Conquered the US 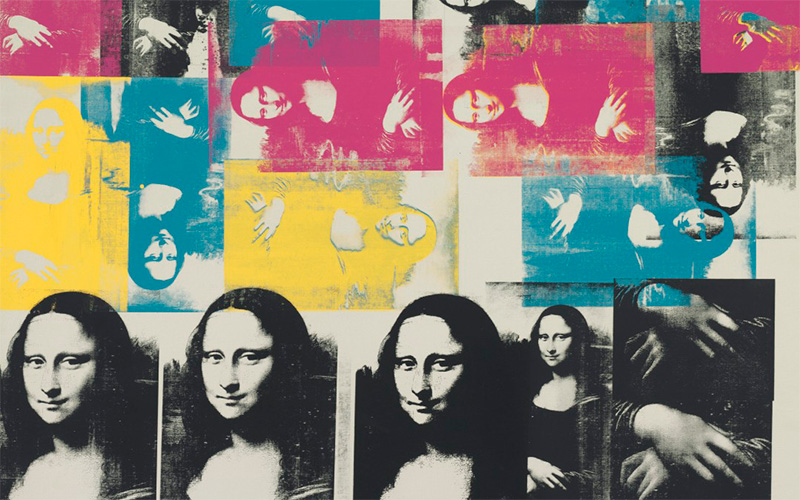 Since her inception in 1503, Leonardo da Vinci’s Mona Lisa has become the ultimate Pop icon, her enigmatic smile having been used to sell everything from postcards and t-shirts to bottled water and computers. As artistic inspiration, the work has influenced talents as diverse as Fernand Léger, René Magritte, Marcel Duchamp, Kasimir Malevich, and Salvador Dalí, but it was Andy Warhol who brought the marketing and art sides together.

After Mona Lisa’s wildly successful 1963 tour of the United States — organised by another familiar Warhol subject, then First Lady Jacqueline Kennedy — Warhol produced a series of seven canvases, the largest of which, Colored Mona Lisa (1963) is offered for sale at the Post-War & Contemporary Art Evening Sale at Christies New York on 13 May.

In December 1962, in the wake of the Cuban missile crisis, America prepared to welcome one of the world’s most famous women. As the SS France sailed up New York’s Hudson River, thousands of fans lined the banks hoping to glimpse neither a movie starlet nor music star or even royalty. It was, rather, the ship’s precious cargo — the 400-year-old Mona Lisa, which had journeyed from the Musée du Louvre in Paris to land in the New World. The cultural exchange was the result of French Minister of Culture André Malraux’s happy news to Mrs. Kennedy that her dream to bring the painting to the U.S. would become a reality.

It’s well known the official State visit to France by President and Mrs. Kennedy, in May 1961, fostered such an outpouring of adulation for the First Lady that the president jokingly introduced himself to the press near the end of the trip as the man who accompanied Jacqueline Kennedy to Paris. But it is less well known the First Lady had an agenda to bring a bit of France to American soil.

During the visit, she developed a close friendship with Malraux, who spent two years helping her hatch the plan. According to Margaret Davis, author of the 2008 book Mona Lisa in Camelot: How Jacqueline Kennedy and Da Vinci’s Masterpiece Charmed and Captivated a Nation, it was reported in Paris Match that Mrs. Kennedy suggested a loan to Malraux. ‘I would love to see the Mona Lisa again and show her to Americans,’ she is reported to have said.

After much debate by the authorities in France regarding the merits of letting the invaluable painting cross the Atlantic, the Mona Lisa was loaded into the cargo hold of the SS France. The voyage’s exact details were a closely guarded secret, yet news leaked, and the French press reported unhappy reactions to the painting leaving its home. ‘The unbelievable news item seems to be true,’ blasted Le Figaro on December 3, 1962. ‘We are about to pack the Mona Lisa and send it to America for a traveling exhibition. During the 400 years this masterpiece has been in France, it has never crossed our borders except when a thief took it to Italy in 1911. Five years ago, a maniac stoned the Mona Lisa and damaged part of the panel. A third aggression is now planned.’

According to Davis’s research, ‘It did not seem appropriate to send one of the most treasured symbols of European culture to America, then regarded as a country with hardly any culture at all.’

Despite concern, the Mona Lisa was treated like visiting royalty when she arrived in America. En route from New York to Washington, she enjoyed an unprecedented security operation. ‘With sirens screaming and red lights flashing, the eight-car convoy made up of police, Secret Service, and Treasury agents proceeded to the Lincoln Tunnel,’ describes Davis in her book. ‘The motorcade was escorted by state troopers in New Jersey, Delaware, and Maryland. As the procession crossed each state line, motorcycle officers roared into view and joined the convoy, taking turns as her official escort.’

Upon her arrival in the capitol, the painting was released from the confines of its climate-controlled crate and installed behind bullet-proof glass in the West Sculpture Hall of the National Gallery of Art.

On January 8, 1963, nearly 2,000 guests — President and Mrs. Kennedy along with Vice-President Lyndon Johnson and his wife, the entire U.S. Congress, members of the Supreme Court, together with ambassadors, diplomats, and museum patrons among them — gathered for the exhibition’s unveiling. But despite meticulous planning, the evening was not an unsurpassed success. The crowds were so large that most could not get to see the painting and the public-address system, especially installed to relay the historic speeches, failed to cope with the awkward acoustics of the museum galleries.

As the crowd grew restless, the President himself tried to bring a degree of order to the situation. ‘The life of this painting here before us tonight spans the entire life of the New World,’ he began over the din, according to Davis. ‘We citizens of nations unborn at the time of its creation are among the inheritors and protectors of the ideal which gave it birth. For this painting is not only one of the towering achievements of the skill and vision of art, but its creator embodied the central purpose of our civilisation. Leonardo da Vinci was not only an artist and a sculptor, an architect and a scientist, and a military engineer — an occupation which he pursued, he tells us, in order to pursue the chief gift of nature, which is liberty. In this belief he expresses the most profound premise of our two nations. We here tonight, among the many men entrusted with the destiny of this Republic, also come to pay homage to the great creation of the civilization which we share, the beliefs which we protect, and the aspirations for which we together strive.’

The public responded with thousands queuing up in frigid temperatures to pay homage to the masterpiece — politicised by Kennedy as a symbol of civilised enlightenment in the face of the Cold War. During the first hour of the public viewing over 3,000 visitors filed past the painting; 12,000 in total on the first day. The next day another 28,000 came and by the time the exhibition closed, 27 days later, over half a million people had waited in line to spend a few precious moments in front of the world renowned smile. The volume of crowds was replicated in New York when the painting transferred to the Metropolitan Museum of Art before returning to Paris.

It was one of the most daring, elaborate art exhibitions ever staged, and the painting’s unlikely, romantic journey to America captured the imagination of the world.

The art tour was front-page news. The opening at the National was broadcast live across Europe and America. ‘It was one of the most daring, elaborate art exhibitions ever staged,’ writes Davis, ‘and the painting’s unlikely, romantic journey to America captured the imagination of the world.’

As such, the event offered all the elements of prime fascination to Warhol: fame, beauty, and the height of society. The artist’s progressive assemblage of multicoloured screenprints of da Vinci’s masterwork comments on its cultural ubiquity. The composition is an early example of Warhol’s prescient chronicle of the cultural moment in which consumerism and high art became inextricably linked.

When Warhol painted Colored Mona Lisa the spring following the tour, he responded to the subject’s fame and mythology rather than its formal qualities.The original idea for the painting came from renowned Metropolitan Museum of Art curator Henry Geldzahler and the work’s source image was a reproduction of the painting taken from a brochure published by the Met, and from this original Warhol made three screens: one full-length reproduction, one cropped to a bust, and a detail of the subject’s crossed hands.

Warhol began the work’s painting process by marking out a simple grid of thin graphite lines on the canvas surface. Initially the various screens — in cyan, magenta, and yellow, as well as black — followed the strict geometric progression of the pencil grid, but Warhol soon began exploring the aesthetic possibilities of the screen, shifting its position, and overlaying the different colours.

Colored Mona Lisa is not the first work in which Warhol used coloured silkscreen inks in his artistic practice, but it does mark a new direction for the artist in his fascination with the visual image. Up to this point he had used colour in a naturalistic way, as seen in his Marilyn paintings of 1962 when he reproduced Monroe’s blond hair, pink skin, and red lips in vivid colours. In Colored Mona Lisa, he deconstructs the mechanical nature of image reproduction. The colours he used are the four constituent pigments of the CMYK color model, the basis for all modern commercial printing. As Nan Rosenthal states in 2002’s The Andy Warhol Catalogue Raisonné: Paintings and Sculpture 1961-1963, ‘This painting looks like an early proof from a high-speed press. …And it is rendered in precisely the same hues…used…to test the accuracy of the colour when photographic transparencies are employed to print reproductions.’ Thus Colored Mona Lisa sets off the artist’s legendary examination of mass means as fodder for high art.

All but two of the Mona Lisa series are comprised of full-scale single or double portraits that fill the entire picture plane. Colored Mona Lisa, along with Thirty Are Better Than One’s regimented grid of black-and-white reproductions of the famous painting, replicates the quick-fire cinematic quality of much of Warhol’s work at the time. Evident is the innovative nature of Warhol’s artistic process as he sought to explore the effects of seriality, a quality that would imbue much of the artist’s most important works that would follow.

Colored Mona Lisa has been included in several important exhibitions of Warhol’s work, including American Pop Art at the Whitney Museum of American Art in 1974 and the artist’s major 1989 retrospective organised by the Museum of Modern Art. In 1993 it even travelled to the Mona Lisa’s home in Paris as part of an exhibition of work by artists inspired by holdings of the Louvre’s collection. But its first showing was at the National Gallery of Art in Washington in 1963, just months after the Mona Lisa herself hung on its walls. It’s highly likely Mrs. Kennedy attended the opening.