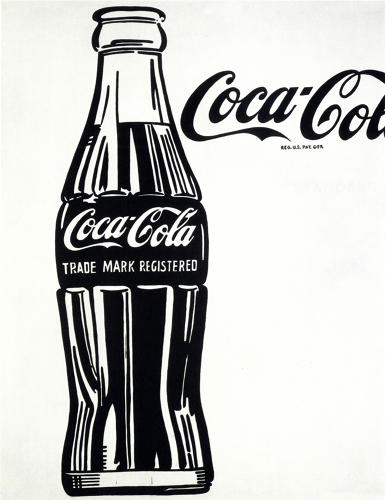 The Coca-Cola bottle turns 100 this year. Originally designed by the Root Glass Company in Terre Haute, Indiana, and inspired by an illustration of a cocoa pod, the bulbous bottle of ridged “Georgia Green” glass was the winner of a design competition: Coca-Cola had asked manufacturers to create a container recognizable even if broken on the ground or you touched it in the dark. Since 1915, hundreds of billions of these bottles have been sold.

To celebrate the centennial of this singular packaging design, the High Museum of Art in Atlanta, where Coca-Cola is headquartered, presents The Coca-Cola Bottle: An American Icon at 100. The exhibit tracks the evolution of this universally recognizable piece of Americana, through original design sketches and prototypes; fan art by the likes of Andy Warhol; Coke bottle-inspired housewares by design firm Nendo; and photographs by greats like Walker Evans, Berenice Abbott, and William Christenberry.

The show reveals how something as seemingly mundane as a mass-manufactured soda container became one of the 20th century’s biggest design success stories. By pairing universally appealing design elements—minty green glass, cheery typography, and a distinct, curvy silhouette—with relentless advertising, Coke turned its bottle into an endlessly appropriated visual symbol. Artists and designers found the bottle an especially powerful muse, using its image as shorthand commentary on American mass culture.

No artist did more to canonize the bottle’s design than Andy Warhol, who used Coca-Cola imagery in his work for four decades. In the ’50s, he drew a Coke bottle with a pair of legs, and in the ‘60s, he made silkscreens of bottles and collages from Coke ads. His photographs of Coca-Cola memorabilia from the ’80s dovetailed with his use of actual Coca-Cola as a medium—he spilled it on paper when creating a cover for Time about the soda’s new formula. (This cover was never printed.) It’s partly thanks to Warhol’s legacy that fashion brands partnering with the beverage company have made it cool to dress like a walking Coke ad.

Designers like Japan-based firm Nendo have also looked to Coca-Cola’s packaging for inspiration: In 2012, they created a collection of stackable bowls modeled after the bottle, in Georgia Green glass, with the raised logo on the base. That consumers would buy high-end kitchenware branded like mass-produced soft drink packaging speaks to the cultural cachet that branding holds.

The Coca-Cola Bottle: An American Icon at 100 is on view at Atlanta’s High Museum of Art until October 4, 2015.