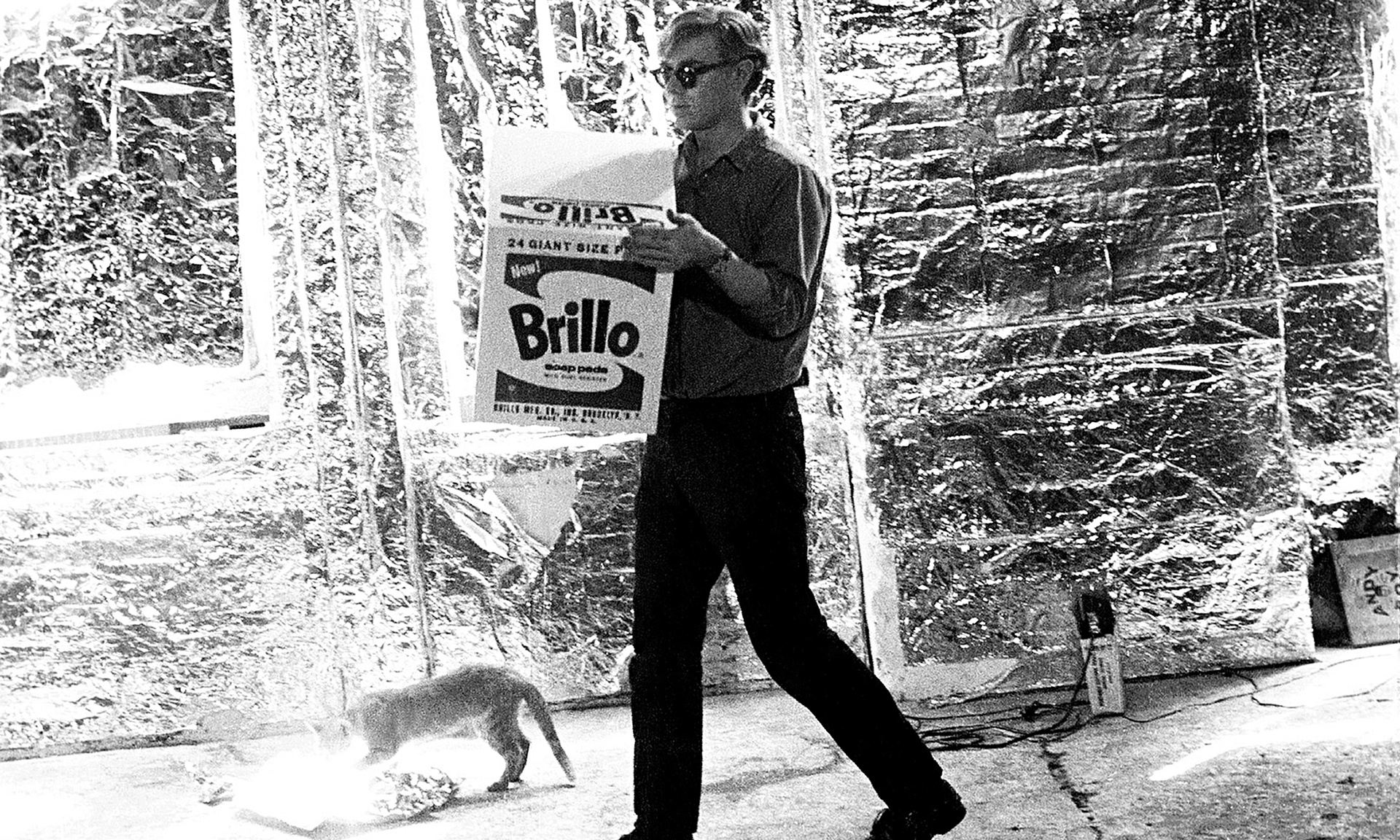 We all know Andy, the alien in the fright wig with his Marilyns and Elvises, who died at the age of 58 from complications to gall-bladder surgery. Most artists are referred to by their proper but distancing surnames – Constable, Matisse – but he’s one of very few to achieve the ultimate signifier of fame, recognition on first-name terms (we might also allow “Vincent” in deference to Don McLean). Most of us could even manage a thumbnail sketch of the life: pop art, Studio 54, Mick and Bianca. Warhol was the notorious voyeur who shot sex tapes avant la lettre, albeit gussied up as art films, all the while insisting that he himself was a virgin – that’s when you could prise a word out of him beyond a “Gee!” or a “My!” He was the seven-stone weakling who hid from the world behind his platinum toupées and Ray-Bans. He was affectless, amoral, his campy work emerging haphazardly from the druggy haze of his studio, the Factory, where a miscellany of misfits and poor little rich kids crashed and burned while Warhol looked on with what John Updike called his “deadpan rapture”.

That, at least, is the boilerplate biography. But after talking to many survivors of Warhol’s circle in New York, including his relatives as well as an associate who was close to the artist for many years but has never spoken at length before, I discovered a very different version of the man, a long way from the dead-eyed Martian of legend. And I came away with a renewed respect for his uncanny prescience in anticipating our fascination with brands, celebrity, even selfies. Warhol was the painter of modern life.

To start at the top, with Warhol’s crowning glory: it’s true that he was a great one for affecting ever bolder, and more unabashedly synthetic, confections as he grew accustomed to the spotlight. But the first time he wore a wig, it was out of a very human self-consciousness, after a nervous illness in his youth left his body completely hairless. With a flair for publicity which was characteristic and innate, Warhol eventually parlayed his baldness into a plus. According toVictor Bockris, an Englishman from Brighton who worked for Warhol at the Factory in the 1970s, Warhol realised that America didn’t know its artists. The generation who immediately preceded him were the abstract expressionists, scowling introspectives such as Jackson Pollock and Mark Rothko. They would only unburden themselves, if at all, to toney art critics, and even then in terms that lay readers might struggle to grasp. But Warhol, the man who turned the everyday of American life into art – dollar bills, soup cans, Brillo-pad boxes – pulled off the same trick in reverse, making an artificial or at least contrived version of “Andy Warhol” part of everyone’s scenery. “What did all Americans immediately get? Cartoons, comic strips,” Bockris said. “So Andy became a cartoon, the Donald Duck of art.” He wore the same things every day – leather jacket, black jeans, sneakers – ensuring that he leapt out of the paparazzi pictures in theNew York Post. “And he looked after himself,” Bockris said. “Andy worked out. He went to the gym and lifted weights.”

John Richardson, the acclaimed biographer of Picasso, compared Warhol to a “holy fool”, a figure associated with the eastern traditions of the remote sliver of land where the Warhol (originally Warhola) family hailed from, Carpathian Ruthenia in the former Austro-Hungarian empire. Warhol’s on-off friend Truman Capote called him “a Sphinx without a secret”. But his reputation for mute inscrutability isn’t altogether justified. Yes, it won him that priceless fascination that we reserve for the silent – Kate Moss, the Queen. Warhol let the praise and abuse heaped on his art and his person go without comment in public, but it was a different matter behind closed doors, according to his nephew, James Warhola. In his childhood, James and his brothers often stayed at their uncle’s townhouse on Lexington Avenue, a cabinet of curiosities, as he remembered it, with “carousel horses and cigar-store Indians”. A lithe and youthful 60, James has inherited something of the dreamy wonder of his famous relative. “When we were all together as a family, my mom would sometimes question Uncle Andy about his art. You know, ‘What’s that meant to be?’, or even ‘Why are you wasting your time on this?’ And he would give as good as he got – not in a hostile way, but saying that this was his work, it had value and importance for him. He had studied art and was very knowledgeable.”

We were sitting in a pew at the Church of St Thomas More, a block or so from Andy’s old home. It was a slightly ersatz copy of an English parish church, the sodium lighting giving the interior an embalmed quality. “My uncle would sometimes bring us here,” James said. It in no way put Warhol off that his fellow worshippers included some of the most distinguished old-money families of Manhattan. But he came to church because he was faithful to the old religion of his mother country, Byzantine Catholicism (the Roman version was the next best thing, and more conveniently situated for Lexington Avenue). James said there were crucifixes in every room of his uncle’s house, including one above his (four-poster) bed. The first time Richardson called on Warhol at home, he was struck by “the gleam, the hush, and the peace of a presbytery”.

The artist never talked about religion, any more than he did about anything else. But it’s often overlooked that he wrote half a dozen books, including a novel and some 1,200 pages of diaries, admittedly with the help of ghostwriters (“he dictated every word of it himself”, Bockris pointed out). In fact, Warhol is perhaps the most quotable artist of all time, with a line on everything from his supposedly non-existent love life to his thoughts on everyday products. “What’s great about this country is that America started the tradition where the richest consumers buy essentially the same things as the poorest. You can be watching TV and see Coca-Cola, and you know that the President drinks Coke, Liz Taylor drinks Coke, and just think, you can drink Coke, too. A Coke is a Coke and no amount of money can get you a better Coke than the one the bum on the corner is drinking.” Incidentally, it’s hard to read that paean to the downhome American values of apple pie and K-Mart as the ravings of a degenerate fag, as J Edgar Hoover might have put it. (The FBI boss once dispatched two of his men to the San Francisco film festival, to scrutinise Warhol’s allegedly subversive movie, Lonesome Cowboys, made in 1968. “There was no plot to the film and no development of characters,” noted the Feds.)

And what about the films? There’s no doubt about the period shock value of Warhol’s Blow Job (1964), for example. Except the viewer only sees the lucky or otherwise recipient, a man by the name of DeVeren Bookwalter, from the waist up. Warhol liked to provoke, but what he really wanted was to be taken seriously by the big boys in Hollywood, and perhaps even to join them one day; to hear the name of the Factory uttered in the same breath as Universal and Warner Brothers.

At his apartment in Brooklyn, the veteran film-maker Jonas Mekas and I spooled through rushes he shot back in the 70s and had never shown anyone before. On the magic lantern of his ancient Moviola screen, Andy Warhol sprang to life once more – brick-red polo-neck, slacks, wig. He was operating his movie camera on a beach at Cape Cod, filming a couple of boys playing rough and tumble. One of them was John Kennedy Jr, JFK’s son. Warhol is known for his awestruck, fan’s-eye-view silkscreen prints of John Jr’s mother, Jackie, but it’s forgotten now that this “freak” who hung out with junkies and losers was also a habitué of Camelot, JFK’s inner circle.

Mekas, the 92-year-old doyen of New York’s underground film scene, was the first to screen Warhol’s releases, patiently lacing up mile upon mile of Warhol’s unblinking cinematography. He told me: “I don’t know about his art, but he is a genius of film.” Just as an old master picture shows us what paint can do, so Warhol’s fanatically unhurried cinema – Empire (1964) consists of a single shot of the Empire State Building running to eight hours and five minutes – demonstrates to the viewer the penetrating insight of the camera. To those who can stick it out, that is. “At the premiere, I insisted that Andy must watch the film like everyone else. Because he is always so busy, he will go after some minutes.” Mekas produced a length of rope and ran it through his fingers. The still sinewy auteur began looping it around my chair. “So I tied him up – like this! Of course when I looked at Andy later, he had freed himself and he was gone.”

What about Warhol’s relationships with others? According to art world lore, he looked on with a kind of glassy ecstasy at the self-harming antics of the low-lifes and bored heiresses who gravitated to his studio, some of whom met premature deaths.

“Listen, those people would have been dead earlier if it wasn’t for Andy Warhol,” Mekas said. “He was the only one who would take them in. He was the perfect father – he didn’t judge people who had been judged and rejected by everybody else.”