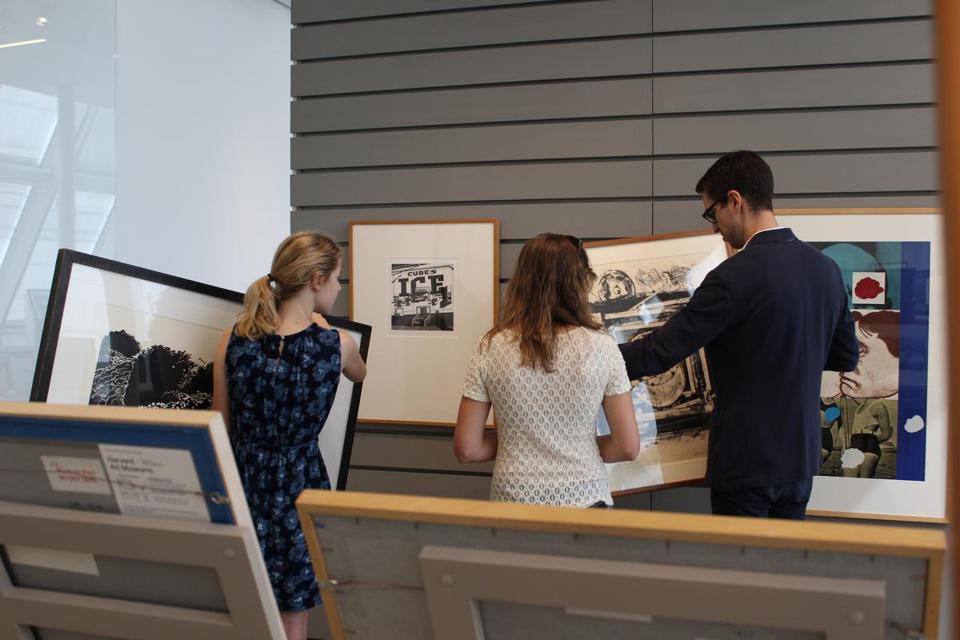 For some students, it’s a thing of the past to hang up images of inspirational quotes and rock-and-roll bands among the clutter of textbooks and unwashed laundry.

For some students, it’s a thing of the past to hang up images of inspirational quotes and rock-and-roll bands among the clutter of textbooks and unwashed laundry.

The school took a break from offering the program in 2008 until this year because of renovations at the museums’ main buildings.

But with the program’s sudden return this semester, eager students lined up to get their hands on the prints for their living spaces.

“It’s been really great,” said Jessica Diedalis, the Harvard Art Museums’ curricular registrar, and facilitator of the Student Print Rental Program. “I was surprised by the broad reach we had with the students. From freshmen, to graduates, to business school students — it’s been incredible seeing the variety of the majors interested in this.”

Earlier this month, students who had signed up for special time slots were allowed to peruse the collection of prints eligible for rental. A gallery of the offerings was set up at the Art Study Center.

Each student could choose a single print they liked from the collection to take home. The carefully matted and framed artworks were then delicately wrapped in plastic so students could safely transport their new decor.

Students have to sign a contract saying they are responsible for the loss, damage, or theft of a print, and are willing to pay for it.

But Diedalis said historically, that hasn’t been an issue.

“We trust the students. We have had a really good track record of students returning the prints and enjoying it, and having a great appreciation for the opportunity,” Diedalis said.

Some of the more notable artist prints students scooped up included a screen print by Warhol, called “Fifth New York Film Festival – Lincoln Center;” a photolithograph by Picasso, called “Goat’s Skull on the Table;” and a 1952 lithograph print by Henri Matisse.

The museums do not disclose values on any works, but the Warhol, for example, is just one of 500 made. A second Warhol print that was rented by a student this year, called “Eric Anderson (Chelsea Girls),” is just one of 75.

One of the students’ favorite perks of the program is claiming bragging rights. Each year, a selection of prints that were once rented are rotated back into Harvard’s permanent collection and put on display. Students then get to say that they once had the rare art hanging in their room.

“That’s really exciting for a lot of students,” Diedalis said.

The rental program, according to museum officials, first started in the 1970s, when the Fogg Art Museum received a gift from an anonymous donor. The donor specified that the money should be used to acquire original prints by contemporary American artists so that they could be leased to students and later be added to the school’s permanent collections.

Now, each print costs $50 to rent. That fee, which is deposited into a special fund specifically for the program, helps keep the tradition alive while expanding the availability of prints.

There are currently 275 prints to rent, but Diedalis said more are undergoing conservation treatment, and will be offered next year.

“This is an opportunity for students to bring art into their everyday lives,” she said. “It encourages students to have a lifelong interest in the arts.”