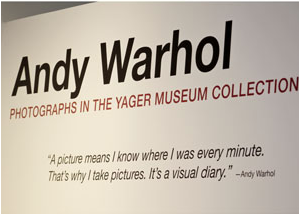 Andy Warhol: Photographs in the Yager Museum Collection is now open in the Museum’s Main Gallery on the College campus. In parallel, the Museum’s Elting Gallery is hosting Rapture and Havoc: Kurtz, Malanga, and Warhol at Hartwick College, an archival exhibition focusing on Hartwick’s connections to the Warhol Factory scene in the 1970s.

The works in the Main Gallery were given to the museum by the Andy Warhol Foundation for the Visual Arts in New York through its Photographic Legacy Program, and include dozens of Polaroids, screen prints, and gelatin silver prints. The Polaroid images, which feature both well-known and obscure faces from the 1970s and 80s, served as preliminary sketches for Warhol’s famous large-scale silkscreen portraits. The gelatin silver prints depict more casual scenes and ‘still life’ images.

The original gift of Polaroids and prints arrived at the Museum in 2008, and was bolstered by an additional gift of Warhol screen prints from the Foundation in 2013. Professor Emerita Fiona Dejardin curated the Warhol exhibition.

“As a photo-historian, I was delighted when the Warhol Foundation approached me regarding a possible donation of Warhol photographs,” she said. “I was even more thrilled when the Yager Museum received this impressive gift. I was fortunate to be able to include the photographs in my courses, along with researching and curating this exhibition. Now the wider community is also able to appreciate these provocative and fascinating works.”

Honour N. Harlowe ’16, a museum studies minor at the College who has been helping prepare the exhibit since early 2013, added her perspective as Student Curator. “This is such a special group of photographs,” she said. “They allow audiences to see not only Warhol’s everyday photography, but also the beginnings of his more well-known screen prints. It’s a more intimate side of Warhol that you wouldn’t get to see in a major museum.”

Dr. Doug Kendall, Yager Museum coordinator, said, “Andy Warhol brings the work of this iconic 2oth-century artist to life for our visitors. The exhibition is full of fascinating imagery that illuminates Warhol’s meticulous work process as well as his personal obsession with documenting everyday life.

“We are grateful to the Warhol Foundation and the exhibition curators for creating the first of what will undoubtedly be a continuing series of exhibitions based on this collection,” he added.

The companion exhibition, Rapture and Havoc, was developed in celebration of the College’s connection to Warhol and his circle in the early 1970s. Bruce Kurtz, then a young Hartwick art and art history professor who straddled the divide between artist, scholar and critic, got to know Warhol and his chief assistant, Gerard Malanga. In 1970, Kurtz brought Malanga to Oneonta for poetry readings, a photographic expedition to Oneonta’s once-busy railyards and an avant-garde cinema festival featuring some of Warhol’s films. The next year, Kurtz arranged an exhibition of Warhol screen prints in the Yager Museum. Hartwick alumni recall that Warhol himself visited campus to deliver a surprise lecture to one of Kurtz’ art classes the morning after the exhibition opened.

Rapture and Havoc recounts these vibrant interactions between Kurtz, his Hartwick students, and the icons of the New York avant-garde through period photographs, newspaper articles and a recording of Kurtz’ 1975 video lecture, Andy Warhol Loves America.

“It is clear that Kurtz had a lasting and significant impact on many Hartwick students who knew him, and I am pleased to have the opportunity to share some of his insights on art and art history with current Hartwick students through this exhibit,” she said. “It is a very interesting chapter in the college’s history.”

Both exhibitions will be open throughout the 2015-2016 Hartwick College academic year.