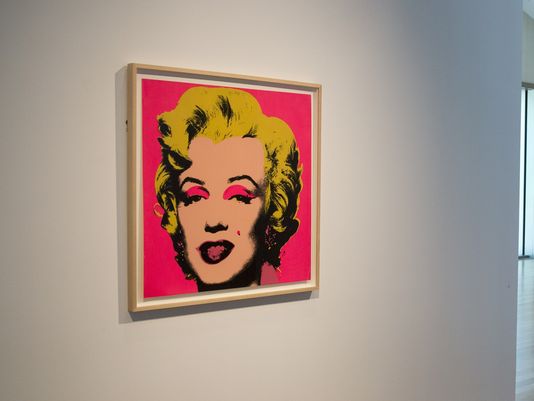 The Grand Rapids Art Museum has acquired an iconic piece of art by an iconic American artist.

The print was donated by an anonymous donor to the GRAM’s permanent collection.

The piece is now on display at the museum through the weekend. Then — to limit the print’s exposure to light, as works on paper are sensitive to light — it will be placed in the archives until it’s featured as part of the museum’s “Collection in Context” exhibit, which opens on May 22.

“This work of art is a significant donation for the GRAM and a beautiful example of individual philanthropy supporting the arts,” said Dana Friis-Hansen, director and CEO, GRAM.

Warhol created the screen-print of Monroe in 1967.

It was the first time he created a print suite of variations on a single image, in this case 10 versions in radically different color combinations, according to the GRAM.

The print — with the actress against a hot-pink ground — is one of the artist’s most famous images, the GRAM said. Over time, it has come to represent the celebrity of both its subject and its maker, in the process of becoming one of the most iconic art portraits of the 20th century.

Following Monroe’s death in 1962, Warhol acquired a publicity photograph of the actress, which he cropped to a close-up of her face and had transferred to a silkscreen, a common commercial process that enabled an image to be reproduced again and again.

Warhol used the screen to create numerous portraits of the actress on canvas, from single images to multiple rows. He colored some of the paintings by screening Monroe’s face, lips, eyes, hair and the background in different shades.