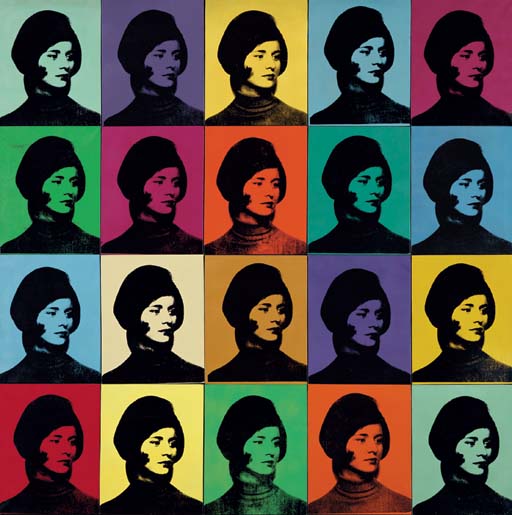 London’s Gagosian pairs Richard Avedon and Andy Warhol, the work of two 20th century artistic icons, in the first major exhibition to focus on the artists together.

Though the artists worked in different mediums (Avedon in photography, Warhol primarily in screenprinting), both relied heavily on repetition and serialization in their portraiture.

Similar themes in the artists’ work will emerge through the exhibition, which spans the 1950s to the 1990s. Avedon’s The Family (1976), comprising 69 portraits of important American political figures, for instance, will be shown with Warhol’s iconic 1972 silkscreen Mao, a portrait of People’s Republic of China chairman Mao Zedong.

The exhibition will also focus on the artists’ embrace of individuals outside of the mainstream, pairing Avedon’s monumental photographic triptych, Andy Warhol and members of The Factory (1969), with Ladies and Gentlemen (1975), Warhol’s silkscreen portraits of drag queens.

Warhol was greatly inspired by drag queens, who he once described as “ambulatory archives of ideal moviestar womanhood.” The recently deceased transgender actress Holly Woodlawn starred in the Pop artist’s films Trash (1970) and Women in Revolt (1972). Avedon’s portrait of Warhol and his entourage, including transgender actress Candy Darling, photographed nude in full frontal, offers a bold snapshot of a New York subculture that encapsulated the country’s sexual and cultural revolution.

Also on view will be darker work from both artists, with Warhol’s “Skull and Guns” paintings on view alongside photographs from Avedon’s Brandenburg Gate portfolio, shot in Berlin in 1989 as the Berlin Wall fell.